“I wear the American flag bandannas and toast to freedom," McCain said as she rebuked Trump. "I am that person" 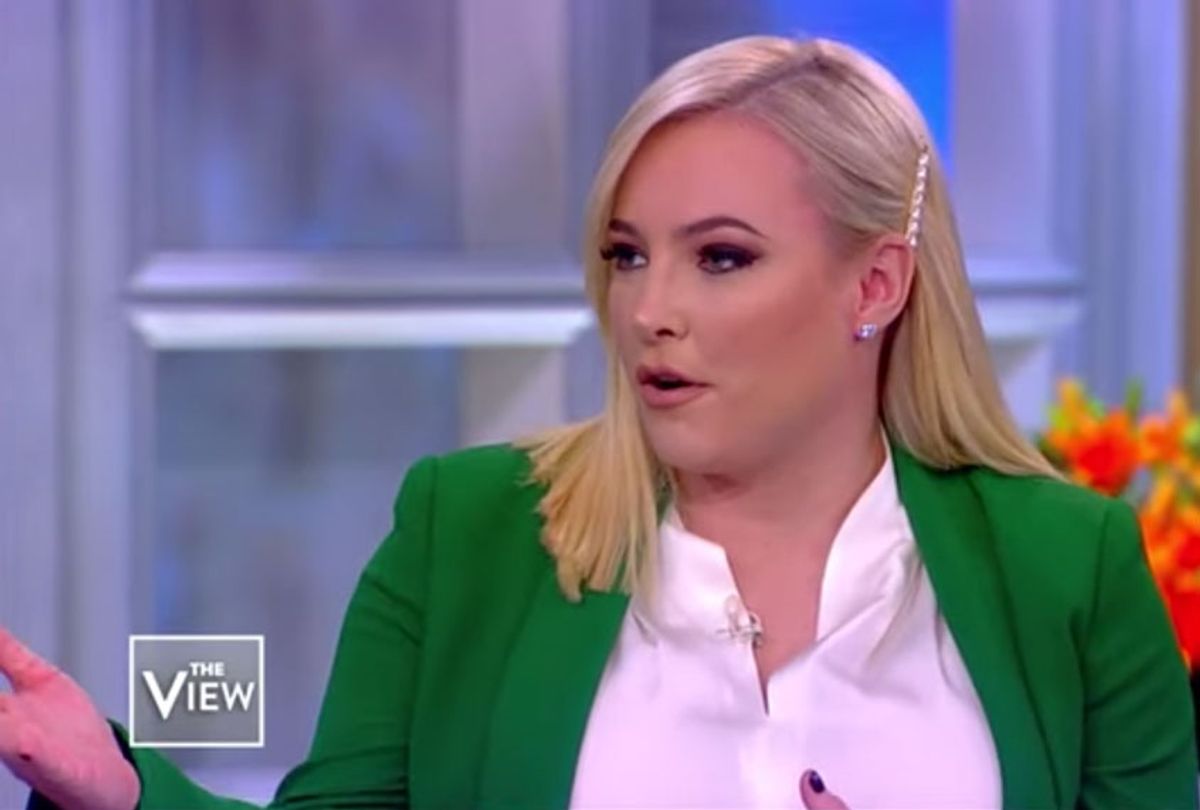 “I wear the American flag bandannas and toast to freedom. I am that person,” the co-host of "The View" said on Monday's show. “I will say: It’s weird to thank Russia, in the line of when he thanked, versus our troops, our special forces, the men and women in the military, the bad-asses that brought this freedom home for us."

After Trump revealed on Sunday that al-Baghdadi had killed himself during a U.S. operation in the Syria, he pivoted to thank Russia for its help.

"This raid was impeccable and could only have taken place with the acknowledgment and help of certain other nations and people," Trump said. "I want to thank the nations of Russia, Turkey, Syria and Iraq. And I also want to thank the Syrian Kurds for certain support they were able to give us."

"We told the Russians we were going in, because we were going over them," Trump said later, referring to Russian-controlled airspace. "And they were curious, but we said, 'We're coming.' We said, 'Look, one way or another we're coming.' They were very cooperative. They really were good. And we said it would be a mission they'd like, too, because they hate ISIS, too."

Speaker of the House Nancy Pelosi later criticized Trump for failing to notify congressional leaders, as is the typical protocol, ahead of the raid.

“The House must be briefed on this raid, which the Russians but not top congressional leadership were notified of in advance, and on the administration’s overall strategy in the region,” she said in a statement.

On “The View,” conservative co-host Abby Huntsman attempted to mount a defense of Trump’s comments.

“He thanked Russia before he thanked our leaders,” she  said, because he needed access to “Russian-controlled airspace.” Trump also thanked the Kurds and Turkey, Huntsman said, “because we couldn’t have done it without their help.”

“Are you comfortable that he told Russia about this before he told his own Gang of 8?” co-host Sunny Hostin asked, referring to the group of congressional and intelligence committee leaders who are typically briefed on classified issues.

Huntsman deflected, repeating that “as dangerous as it was, we needed Russia’s help.”

Co-host Joy Behar said the problem was that Trump has a “chaotic foreign policy.”

“Everything is tainted because of what he did to the Kurds, too,” she said, referring to Trump’s decision to abandon Kurdish allies in northern Syria, which paved the way for Turkey’s invasion of the region. “We don’t trust him. We don’t trust that he’s a real American. We trust that he is in the pocket of Vladimir Putin.”

Co-host Meghan McCain interjected to note that she was “shocked” that Trump had thanked Russia first.

"You thank our troops, and the flag and America first," she said. "Period.”

Behar chimed in to note that Trump had refused to notify congressional leaders, because he claimed to be worried about leaks.

“The leaks are coming from the White House — not Nancy Pelosi,” Behar said.

McCain added that Trump’s decision to politicize the raid in that way soured what would have otherwise been a “celebratory day.”

“The sad part is the politics and the things that he has done. I was shocked that he thanked Russia first. But that still doesn’t negate that this is a big win, and we shouldn’t be politicizing it,” she said. “But the problem is he politicizes everything.”