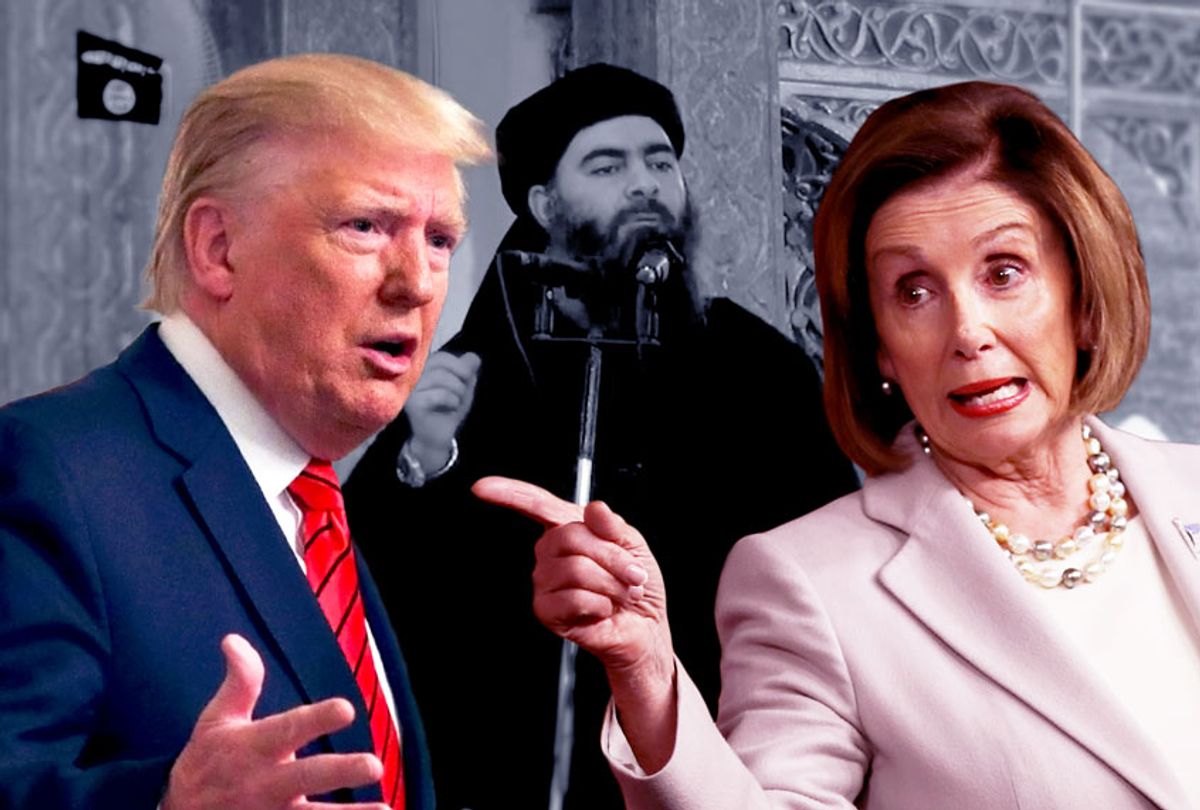 President Trump’s decision to pull out of Syria nearly derailed the raid that killed ISIS leader Abu Bakr al-Baghdadi. And Trump's decision to inform the Russian military about the raid before he told Congress has left Capitol Hill Democrats fuming.

Trump announced that al-Baghdadi had been killed in a military operation in Syria on Saturday and immediately pivoted to speculation that this was a more significant event than the 2011 raid that killed al-Qaida leader Osama bin Laden.

"This is the biggest there is. This is the worst ever," Trump said. "Osama bin Laden was big, but Osama bin Laden became big with the World Trade Center. This [Baghdadi] is a man who built a whole, as he would like to call it, a country."

According to The Times report, the raid was made possible by the help of Kurdish intelligence officials in the region, who have likely fled or relocated amid a Turkish invasion after the U.S. withdrawal. Officials told the Times that the Kurds continued to update Americans on Baghdadi’s location even after the troops withdrew. Military officials said that the operation had to be sped up as a result of the withdrawal.

At his press conference on Sunday, Trump profusely thanked the Russian government, which is the primary backers of Syrian President Bashar al-Assad, for cooperating with the operation.

"[The Russians] were very cooperative, they really were good,” he said. “Russia treated us great. They opened up, we had to fly over certain Russia areas, Russia-held areas. Russia was great."

The Russian Defense Ministry disputed Trump’s claim that it had cooperated with the raid, calling his statement “propaganda,” while House Speaker Nancy Pelosi criticized Trump for informing the Russians but failing to notify Congress, as is standard protocol.

“The House must be briefed on this raid, which the Russians but not top congressional leadership were notified of in advance, and on the administration’s overall strategy in the region,” Pelosi said in a statement after praising the troops involved in the mission. “Our military and allies deserve strong, smart and strategic leadership from Washington.”

The remark echoed Pelosi’s comments during a contentious White House meeting earlier this month when she asked Trump why “all roads lead to Putin” in his policymaking.

Trump said at his news conference that he intentionally had not notified congressional leaders because he was worried about leaks.

At another point, Trump mentioned that he was “going to notify” congressional leaders “but we decided not to do that, because Washington leaks like I’ve never seen before.”

“Washington is a leaking machine,” he said. “And I told my people, we will not notify them until our great people are out — not just in, but out. I don’t want to have them greeted with firepower like you wouldn’t believe.”

Trump did not cite any evidence for why he thought Pelosi might leak such information.

Rep. Adam Schiff, D-Calif., who chairs the House Intelligence Committee, told ABC News’ “This Week” on Sunday that Trump did not notify any members of the Gang of Eight, which includes the top four Democratic and Republican leaders in both the House and Senate, along with leaders of the intelligence committees in both houses.

By contrast, President Obama kept Rep. Mike Rogers, R-Mich., who was then the chair of the House Intelligence Committee, abreast of the plans for the 2011 bin Laden raid for months.

“I’ve been talking to Mr. Panetta over these four months and over this weekend,” Rogers told reporters at the time, referring to Obama’s CIA director, Leon Panetta. “So we knew when the president authorized it, and we had some discussions that it was likely to happen, and then got a call after it happened.”

Steve Doocy, the host of “Fox & Friends,” defended Trump’s decision not to inform congressional leaders. “He’s absolutely right about that, and it is a leaking machine,” he said. “Given the fact of how Democrats are going after him, I could understand that."

"Isn't it sad, though, that the president couldn't even tell Congress because he's worried someone will leak and in this operation, people could die?" added co-host Ainsley Earhardt.

There is no evidence that the information would be at risk. “Pelosi served on the House Intelligence Committee for more than 20 years and has not been known to reveal sensitive information,” The Washington Post noted. “Last weekend, she led a high-level congressional delegation to Afghanistan and did not publicly disclose the trip until the group had returned.”

Schiff told ABC News that the normal protocol is important because it serves as a safeguard in the event things go wrong on the ground.

"Had this escalated, had something gone wrong, had we gotten into a firefight with the Russians, it's to the administration's advantage to say, 'We informed Congress we were going in, they were aware of the risks. We at least gave them the chance to provide feedback,'" he said. "That wasn't done here. I think that's a mistake, but let's not lose sight of the fact that it was a success and a ruthless killer has been taken off the battlefield."