Be careful what you wish for, Republicans: Now impeachment starts for real

Republicans demanded a more public impeachment process. Well, here it comes — and they're not gonna like it 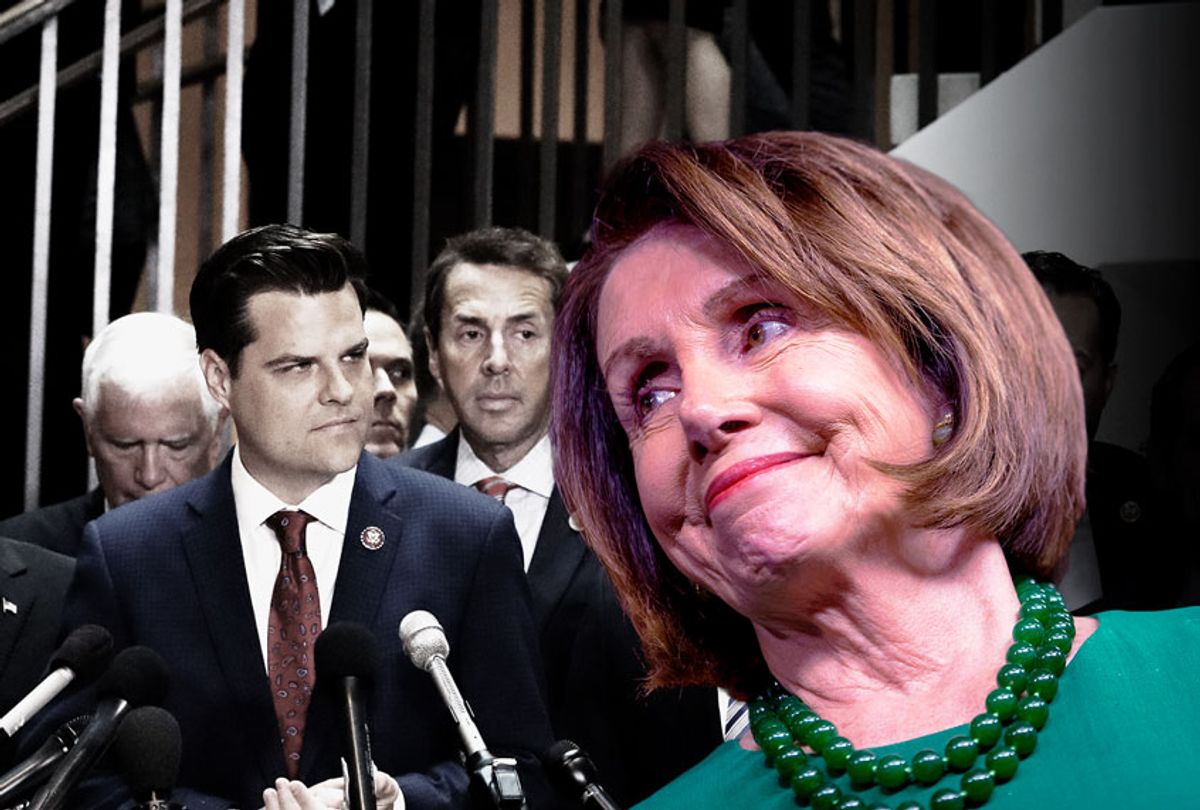 Halloween is a fitting day for a spooky morality fable, in the spirit of "The Monkey's Paw," about being careful about what you wish for. Republicans have cast about desperately for any talking point they can use disparage the impeachment inquiry into Donald Trump, no matter how lame or transparently disingenuous. They've spent the past week or so feigning outrage over the closed-door testimony into Trump's Ukrainian extortion scheme. Even though Republicans knew that there would come a time when the hearings became public, they fanned out on cable news — and even crashed a hearing room last week — making wild accusations about a lack of transparency, clawing at any pathetic straw they could use to spin a narrative about supposed Democratic malfeasance.

Well, now they're getting what they claim they wanted: The House of Representatives voted Thursday to pass a formal resolution on the impeachment inquiry, signaling the new phase in which hearings will begin to go public. (There will probably be a few more closed-door depositions, but public hearings are expected to start right after Veteran's Day.) As with the wishes granted by the monkey's paw, this is what Republicans swore up and down they wanted — and what they will very likely be sorry to have received.

"[N]ow are starting to go after the Substance even more than the very infair Process," Trump exalted in his inimitable scrambled Twitter English on Wednesday, in anticipation of the vote that his party has demanded.

Trump is probably the only member of his party who actually feels good about going after the "Substance," however. For Republicans in Congress, process arguments were a lifeline. No matter how dumb those objections were or how obvious their bad faith was, at least they gave Republicans a way to defend Trump without talking about the substance of the manifold charges against him. That's because trying to defend Trump on the substance is the last thing anyone with any remaining sense of dignity should want to do.

As anyone who has been following the impeachment inquiry knows, although House committees have been holding hearings behind closed doors, plenty of information is becoming public. Each new round of revelations makes Trump and the loyalists on his staff look worse.

Just this week, for instance, Lt. Col. Alexander Vindman, a National Security Council adviser on Ukraine, testified that the transcript of a call between Trump and Ukrainian President Volodymyr Zelensky — which already offered plenty of evidence of impeachable offenses — had been released with serious omissions and that White House staff took pains to cover up the original call. Last week, acting U.S. ambassador to Ukraine Bill Taylor affirmed what was evident from that call transcript: Trump was attempting a quid pro quo extortion scheme against Zelensky, trying to force the Ukrainian leader into fabricating evidence against Trump's Democratic rivals in exchange for military aid that had already been authorized by Congress.

Taylor's testimony, by the way, appears to be the instigating factor for the Republican tantrum over process. It was so damning that Republicans were willing to do anything to distract from it, including letting Rep. Matt Gaetz, R-Fla., a guy whose mugshot has become the source of a thousand memes, spearhead the stunt of crashing into a secure hearing room.

The big takeaway here is that Republicans understand what the substantive issues are, and have no desire to defend Trump on that ground. They have been harping on process arguments in an effort to distract from the substantive evidence that shows their president to be a two-bit criminal, shaking down foreign leaders like a Mafioso trying to get protection money from the local pizzeria owner.

All of which is why we can expect that as soon as this vote is over and Republicans get their supposed wish, they'll come up with a whole bunch more bad-faith objections to the process instead of engaging with the meat of the issue, which is what Donald Trump did and whether it amounts to an impeachable offense. (Or several of them.)

But here's the thing: Once the hearings are held in public, Republicans may not have much choice but to try to engage more directly with the actual evidence against Trump, at least if they're going to continue this foolhardy mission of defending him. What has already emerged from closed-door testimony has been hard enough for Republicans to avoid. When those same witnesses, and possibly more, are on camera speaking directly for themselves, throwing up distracting objections to process may get quite a bit harder to pull off.

As Greg Sargent of the Washington Post points out, "Trump wants Republicans to forcefully argue that he did nothing wrong," which is presumably what he meant in that embarrassing tweet about "starting to go after the Substance."

Why Trump wants a more full-throated defense is obvious enough. At the end of the day, the most that can be gained from process arguments is more stalling. At some point, the focus will be on the central question of whether it's OK for a president to strong-arm foreign leaders into backing his lies in order to cheat at an election. Trump knows that to have any chance of winning that argument, he'll need his people to get out there and start validating his tactics. The sooner they get on it, the more time they'll have to normalize Trump's criminal behavior as "just politics" before articles of impeachment reach the Senate for trial.

Republicans, however, still seem reluctant. Not because there's any remaining attachment to the concept of fair play and decency in the GOP caucus, of course. More likely it's because Republicans are human beings too, and they don't like saying humiliating and stupid things in public that will get them dunked on repeatedly, first on Twitter and then on "The Daily Show" and then, if they're really unlucky, on the late-night talk shows.

Unfortunately for them, there's no way to defend Trump and sound like a person with any sense of shame or dignity. Republicans should probably be grateful to Nancy Pelosi and House leadership for putting off the impeachment inquiry vote and holding closed-door hearings for so long. In doing so, they gave Republicans a temporary reprieve against the day they finally have to give up their last remaining shreds of dignity and start arguing that there's really and truly nothing wrong with blackmailing foreign leaders into making up lies about your political opponents.

Because that day is coming, and soon. Republicans used their monkey's paw to wish for public impeachment hearings, and now they're out of wishes to make those cameras go away.