Trump wants to use loophole to install immigration hawk at DHS. Even Republicans say it's illegal 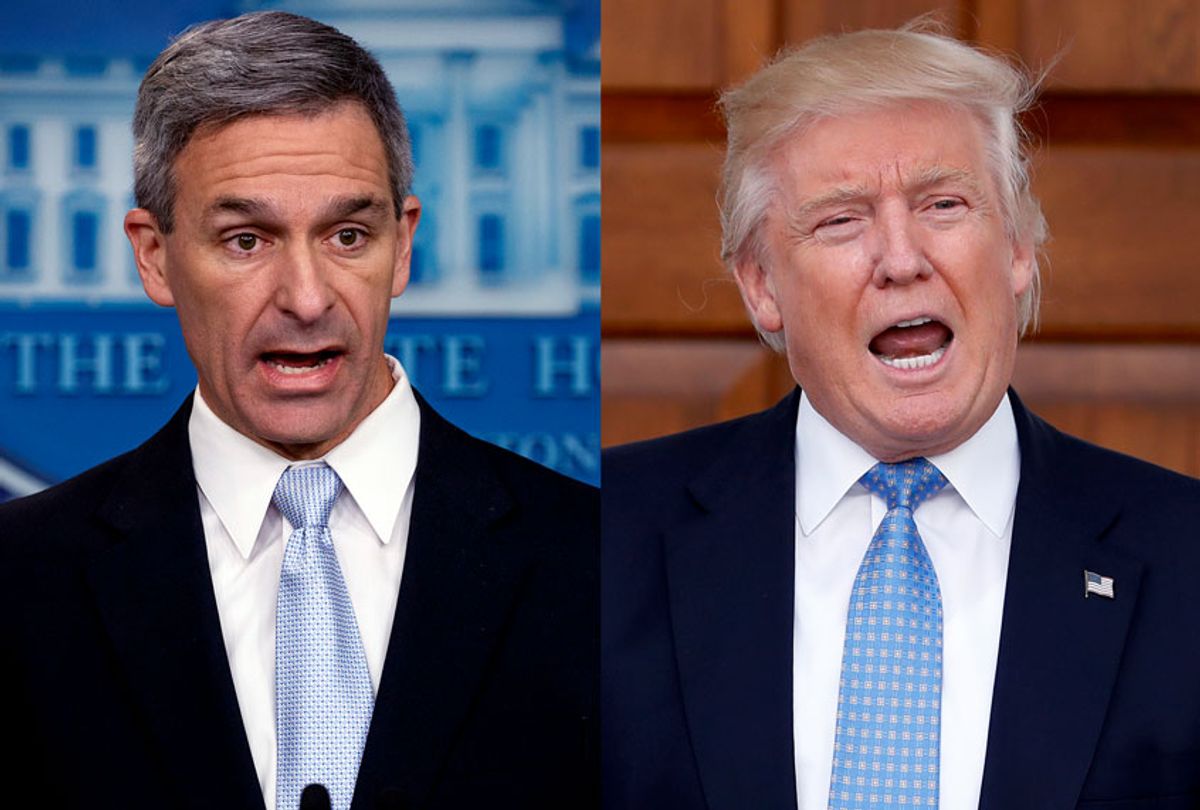 The Trump administration wants to use an obscure loophole to install far-right immigration hawk Ken Cuccinelli as acting head of the Department of Homeland Security. But in a rare rejection of the president, even Republican lawmakers decried the plot as illegal on Wednesday.

Trump has been eyeing Cuccinelli, the acting director of U.S. Citizenship and Immigration Services, to take over DHS for weeks, but White House lawyers determined that it would be illegal to appoint him because he is ineligible under the Vacancies Act. Federal law states that acting department heads must either serve 90 days as a “first assistant” to the previous Senate-confirmed secretary or be confirmed to another position, making Cuccinelli, who was appointed as acting head of USCIS following the ouster of Secretary Kirstjen Nielsen, ineligible.

Trump has told allies that he wants to do an end-run around federal law and appoint Cuccinelli to DHS anyway, The New York Times reported on Tuesday.

Trump’s plan would involve using a loophole in which the president would tap Cuccinelli as assistant secretary of the Countering Weapons of Mass Destruction Office at DHS — currently a vacant position — and then promote him to acting secretary. Because the assistant secretary would be considered an “inferior officer,” the president can appoint anyone he wants without a Senate confirmation.

The move is under consideration because Cuccinelli is unlikely to be confirmed to the position, despite a Republican majority in the Senate.

Cuccinelli, a far-right conservative, previously supported primary challenges to incumbents like Senate Majority Leader Mitch McConnell, who said earlier this year that he has a “lack of enthusiasm” about Cuccinelli being nominated to any permanent position.

Sen. Shelley Moore Capito, R-W.V., a staunch Trump ally, told Politico that Cuccinelli would have “difficulty being confirmed” to a permanent position and added that appointing him in an acting capacity would still be a “problem.”

A senior administration official acknowledged that Cuccinelli is “unprepared to run DHS and its vast array of missions” and many insiders worry that he would “transform it into an all-immigration, all-the-time Department, ignoring the other serious threats to the country.”

“We need somebody who knows the department really well. Somebody who understands the complexities. And the realities of the challenges of balancing all that has," Capito told the outlet.

A senior administration official also added that McConnell would never allow Cuccinelli to be confirmed.

“If Ken was as liked by the White House as he thinks he is, he would’ve been nominated months ago," the official said. "The problem for Ken is that he is a non-starter with Mitch McConnell and has a less than zero chance of being confirmed by the Senate.”

Sen. Chuck Grassley, R-Iowa, the most senior Republican in the Senate, told Politico that Trump’s plan to go around the Senate was simply illegal.

“There’s some opposition to Senate confirmation. I have not heard anything about some go-around. But it’s my understanding that the existing law would not permit" Cuccinelli to be installed as acting head at DHS, Grassley told the outlet. “I don’t know how you get around that. I don’t think it’s possible because of what the law says, not because of anything else.”

Democrats also slammed the plan and questioned why Trump could not find a single person to fill the position who could legally run the department.

“If the White House cannot find anyone qualified and suitable to run the Department of Homeland Security — or even run it in an acting capacity — something is very wrong with this administration,” Rep. Bennie Thompson, D-Miss., the chairman of the House Homeland Security Committee, told Politico.

Cuccinelli is a favorite of Trump, as well as of White House adviser Stephen Miller, an immigration hardliner who was reportedly responsible for the purge of top DHS officials like Nielsen earlier this year. Cuccinelli immediately made headlines after his appointment to USCIS when he declared that the poem on the Statue of Liberty welcoming immigrants only applied to “people from Europe.”

"You and Mr. Trump don't want anyone who looks or talks differently than Caucasian Americans to be allowed into this country,” she said.

"You want to block all immigration and make life harder for immigrants and you have demonstrated that you will pursue this heinous white supremacist ideology at all costs,” Schultz continued.

“I am not a white supremacist as you alluded,” Cuccinelli replied, “nor is the president.”