Elizabeth Warren reveals long-awaited plan to fund Medicare for All 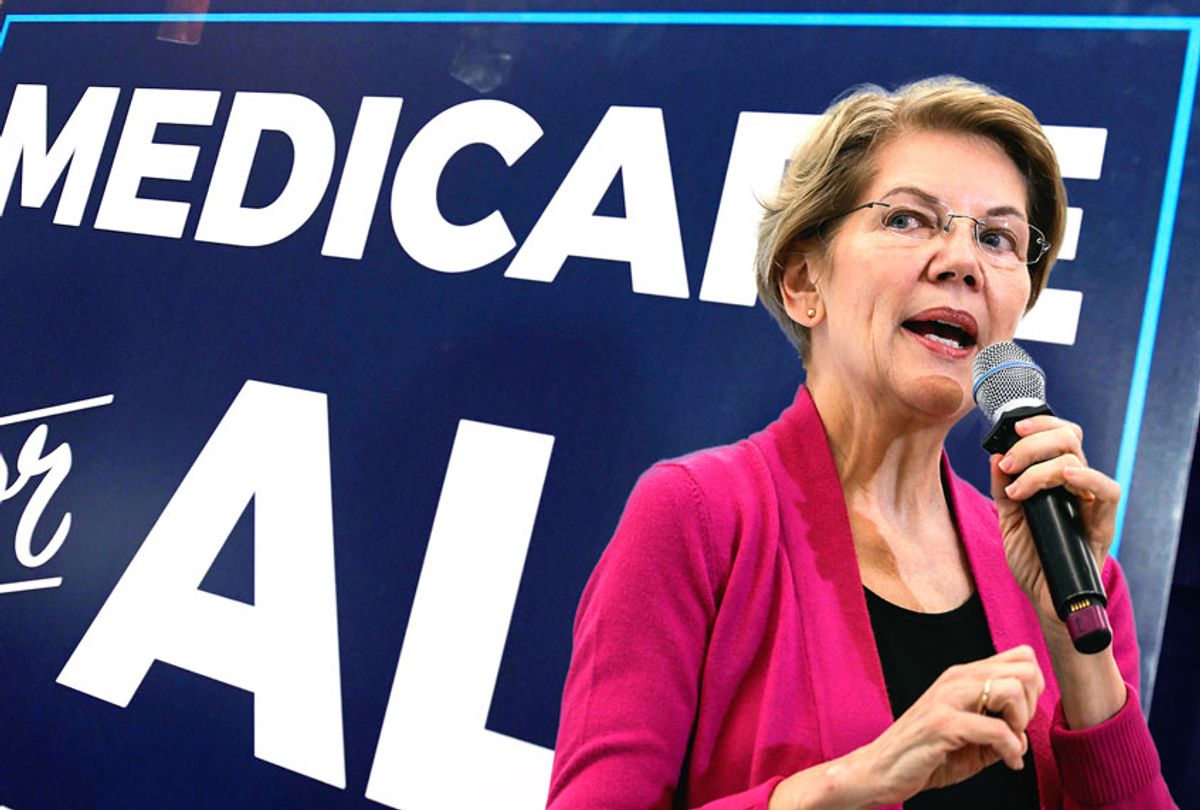 Sen. Elizabeth Warren, D-Mass., on Friday released her long-awaited plan to finance "Medicare for All” — a direct response to the mounting pressure she faced since emerging as a frontrunner in the race for the 2020 Democratic presidential nomination.

In a new outline, Warren estimates that her single-payer health plan would cost "just under" $52 trillion over a decade — the amount the nation is projected to spend on health care under the current system over a ten year window in the absence of reform.

Warren's plan would require the federal government to raise $20.5 trillion over 10 years. It seeks revenue by using savings generated by Medicare for All. She vows to eliminate premiums, deductibles, copays and most out-of-pocket costs and to add coverage for dental, vision, audio and long-term care.

"Medicare for All is about the same price as our current path — and cheaper over time," Warren wrote in a Medium post. "That means the debate isn't really about whether the United States should pay more or less. It's about who should pay."

The Massachusetts Democrat vows to raise revenue without "one penny in middle-class tax increases," a response to criticism from a rival for the party’s 2020 nomination: South Bend Mayor Pete Buttigieg.

Other sources of revenue include doubling what had been a 3 percent wealth tax on billionaires to 6 percent; treating capital gains for the top 1 percent as earned income and requiring taxes to be paid annually; making tax changes for corporations and foreign earnings; and creating a financial transaction tax of 0.1 percent of every stock or bond.

Warren said she would raise $2.3 trillion by boosting enforcement of existing laws, stepping up tax reporting and withholding requirements. She estimates she would raise $400 billion by overhauling the immigration system and about $800 billion over ten years by eliminating the Overseas Contingency Operations Fund, an emergency war fund which Warren argues should be balanced in the context of the actual defense budget.

She claims her plan would "sharply reduce administrative spending" and "reimburse hospitals at an average of 110 percent of current Medicare rates," which tend to be significantly lower than those currently paid by private insurers. (Critics of Medicare for All have argued that using Medicare reimbursement rates to pay providers would force hospitals to shut down, though there is currently not enough evidence to support that claim.)

Warren proposes developing a comprehensive payment reform to encourage providers to generate more savings. She proposes bringing down Medicare drug prices by 70 percent for brand-name drugs and 30 percent for generics through a "suite of aggressive policy tools."

As she saw her support surge in national and early-state polls in recent weeks, Warren faced increasing pressure to explain how she would finance her single-payer, government-sponsored insurance plan. On the trail, the senator had repeatedly vowed that her plan would cut costs but faced criticism for offering sparse details.

Questions surrounding health care policy have exposed generational and ideological splits among the Democratic presidential field since the start of the primary contest. Some candidates have offered full-throated support for abolishing private health insurance in favor of a single-payer system while others have served up more moderate proposals that would build more gradually on the public-private model of coverage currently in place.

At the last primary debate, Warren fielded attacks from several of her 2020 rivals over her refusal to explain how she would fund Medicare for All. In detailing her own proposal, Warren challenged every presidential hopeful who opposes her plan to "put forward their own plan to cover anyone, without costing the country anything more in health care spending," adding a final jab: “We need plans — not slogans."