Mainstream media loves the "both sides" narrative. But the real problem is that the GOP has snapped the tether 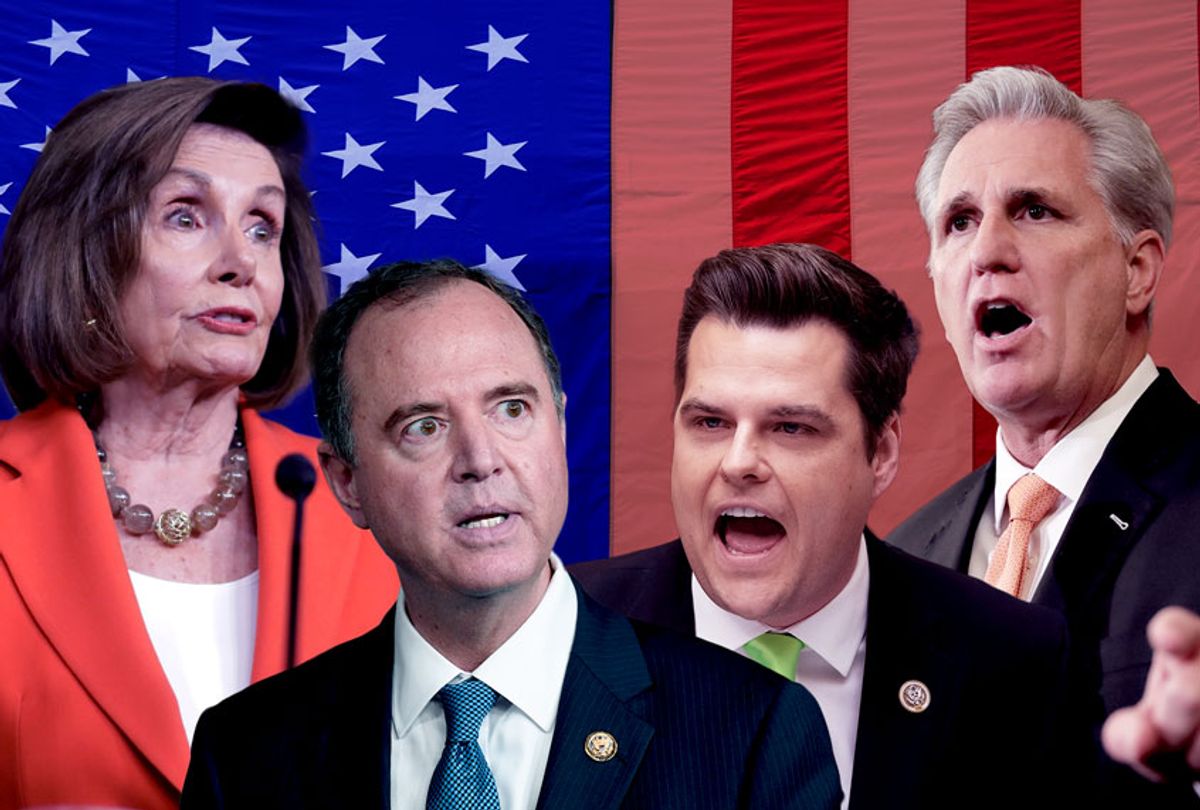 When the final vote tally on a formal resolution governing the impeachment inquiry concluded on Thursday with a party-line split — all Republicans present voted against the resolution, and all but two Democrats voted for it — one could practically hear the squeak of excitement from the mainstream media pundit class. Here was an opportunity to run with a "partisan polarization" narrative that neatly sidesteps the substantive disagreement between the two parties.

The situation is simple: The Republican Party, both its politicians and its voters, has collectively decided that it's fine for Donald Trump to use his office to run an illegal extortion scheme against a foreign leader in an effort to cheat in the 2020 election. The moral rot of the Republican Party, and its cultist loyalty to a criminal president is the sole reason for this situation. Democrats are — rather too reluctantly! — trying to do something to stop the bleeding.

But to read mainstream news coverage, one would think the real problem is that both sides are irascible and bitterly divided, and that there's some reasonable solution that involves everyone joining hands and finding some way to compromise.

"Analysis: On Impeachment Fight, Neither Side Seems Willing To Give an Inch," read the Friday morning front-page headline at the New York Times, which, as usual, was the most egregious offender when it comes to "both sides" pablum.

The article underneath, by Carl Hulse, focused exclusively on the failure to compromise, noting that "the two parties [are] pulling ever further apart as they dig in deeper on the righteousness of their respective causes" and that "[l]ittle evidence has emerged that either side is willing to give an inch."

How the parties are supposed to compromise on the issue of whether the president should be allowed to commit serious crimes is not even addressed. After all, to acknowledge that one side is for crimes and the other side is against them might expose how ridiculous this "compromise vs. polarization" framework really is.

The Associated Press covered the vote in a similar vein, writing that "Democrats swept a rules package for their impeachment probe of President Donald Trump through a divided House," and failing to note until the 22nd paragraph that Republicans have been calling for such a vote for weeks, as Media Matters pointed out.

Other outlets, including NBC News, CNN and the Washington Post, ran front-page stories on the way partisan polarization shaped the vote and is driving the polling on impeachment.

These stories are tough, because, in one sense, it's technically true that the vote and the polling shows that Americans are deeply divided, by party identity, on the issue of impeachment. But that framework misses the larger story: The reason for this deep division is that Republicans, both voters and their representatives, have completely abandoned any respect for democracy and rule of law, choosing instead the cult of personality around a flagrant criminal. It ignores that Democrats value the truth and Republicans are awash in lies. It equates the two sides in a way that is not justified by looking at the bigger picture.

The "both sides" frame, in other words, hides the fact that this situation is very a one-sided problem.

One shining exception in the coverage was another front-page story at the Washington Post that looked away from the "both sides" frame and focused on the real story, which is how the Republican Party has become an authoritarian cult.

The story, written by Washington Post staffer Griff Witte, follows what happened to Rep. Francis Rooney, R-Fla., when he ever so gently suggested that it was important "to get all the facts on the table" and said he valued substantive evidence such as the testimony from "professional diplomats" and the fact that Trump's acting chief of staff, Mick Mulvaney, had literally admitted to holding up military aid to extort political favors from Ukrainian President Volodymyr Zelensky.

Even showing mild interest in the facts, however, led to Rooney getting drummed out of the party by Republican leadership in his district, who saw his curiosity about truth as "an act of supreme disloyalty to a leader they say they have come to revere more than any in their lifetimes."

"I think it’s better when people think," Rooney told Witte when asked if he thought such cultish behavior is good for the country.

Nothing of this sort, or even close to it, is going on with the Democrats. On the contrary, the 2018 midterms, in which the newly elected Democrats who helped take the House of Representatives ran the gamut from centrists to socialists, was a reminder of how ideologically diverse the coalition is. The Democratic presidential primary, too, makes that candidates from the center, the left and everywhere in between are getting support in the polls.

The "polarization" framework is profoundly misleading because it suggests that the two parties are like magnets repelling each other with identical force and velocity. But the real story is that while Democrats have moved modestly to the left on some issues, most of the divisions in the country are the result of Republicans becoming both more fascistic and completely untethered to reality.

This isn't about "both sides" acting in an equal manner. It's about Republicans losing their minds and everyone else, understandably, reacting against that.

Nowhere is this more obvious than on the issue of impeachment. There's not really any middle ground on the issue of using military aid to blackmail a foreign leader into helping you fabricate lies about your political opponent, as the evidence shows Trump clearly did. This isn't an issue where reasonable people arguing in good faith can disagree. This is a black-and-white, wrong-versus-right issue.

Our mainstream media, with its addiction to "balance" over truth, is manifestly ill-equipped to handle a story where one side is so clearly in the right and the other side is so clearly in the wrong. So reporters and editors hide behind these factual-but-shallow stories that argue the nation is "divided" and "polarized," all while gently gliding over the fact that the division is happening because 40% of the country has abandoned basic decency while the rest of us look on in horror. But as the impeachment process intensifies, it may become harder to maintain the illusion that the issue is polarization, rather than the radicalization of the Republican Party.