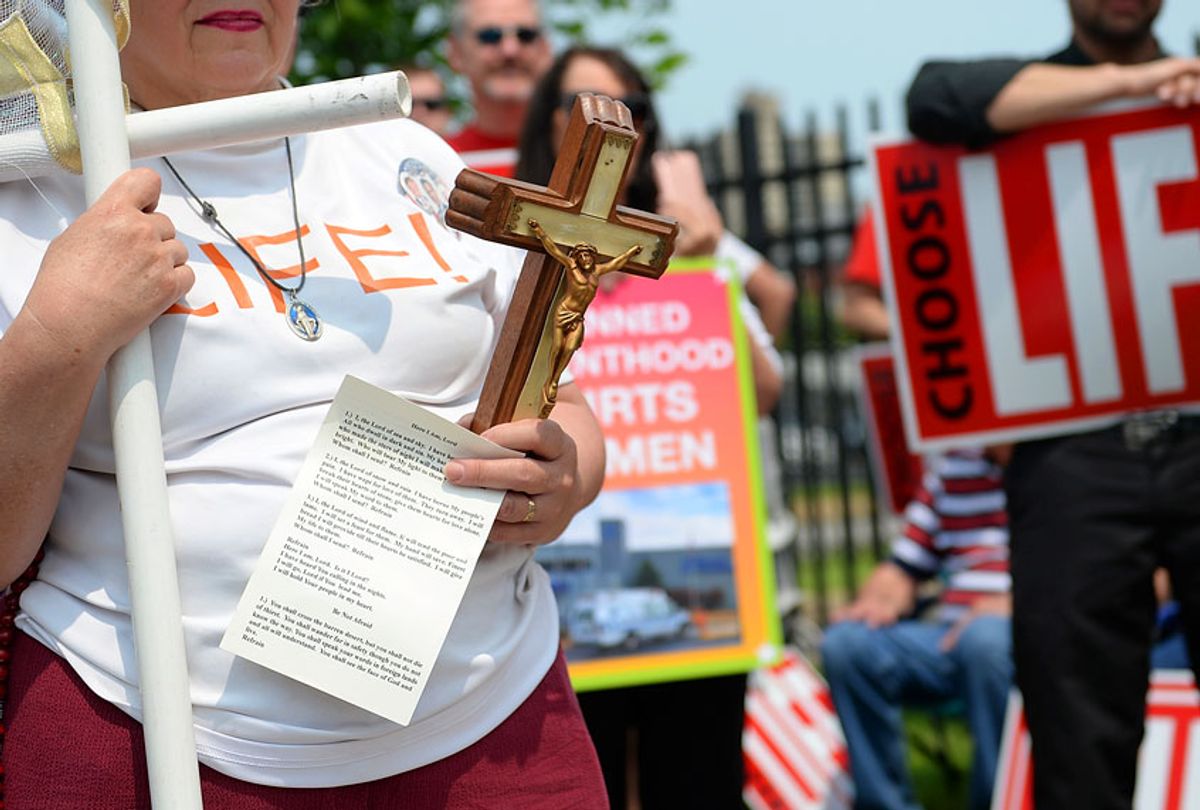 A pro-life supporter holds a crucifix during a demonstration outside the Planned Parenthood Reproductive Health Services Center on May 31, 2019 in St Louis, Missouri. (Getty/Michael Thomas)
--

Missouri’s top health official testified at a state hearing that his department used a spreadsheet to track the periods of women who visited Planned Parenthood.

The spreadsheet, based on medical records accessed by the department’s investigator, included the dates of the last menstrual period for each patient, as well as medical identification numbers, dates of medical procedures and the gestational ages of fetuses. Women’s names did not appear on the document.

Williams said his department launched the investigation over concerns that it was not receiving all complaint reports following failed surgical abortions.

Williams, an OBGYN, was appointed in 2017 by then-Republican Gov. Eric Greitens shortly before the executive's resignation after being indicted by a federal grand jury on one count of felony invasion of privacy charge stemming from a 2015 extramarital encounter.

Williams said during his testimony that he is “pro-life” and never performed an abortion.

The head of the St. Louis Planned Parenthood, Yamelsie Rodriguez, told The Star that Williams’ testimony was “deeply disturbing.”

“This is government overreach at its worst,” she said. “This is outrageous and disgusting.”

The state’s health department told CNN that Williams did not “possess” the spreadsheet and first saw it at a deposition when questioned by a Planned Parenthood attorney. The department claimed that no patient data was improperly handled that regulators did nothing wrong.

The health department issued a statement Wednesday slamming “false claims that Dr. Randall Williams tracks the menstrual cycles of women seeking abortions at Planned Parenthood.” The department, however, acknowledged that it created the spreadsheet but only disputed that Williams had requested it.

The Star reported that the spreadsheet was discovered through legal discovery after an employee sent the spreadsheet, titled “Director’s Request,” despite the department’s claims that Williams had not requested it. The email’s subject line read "Duplicate ITOPs with last normal menses date,” referring to induced terminations of pregnancy.

The investigation found that four out of more than 4,000 patients who received abortions at the St. Louis Planned Parenthood remained pregnant after the procedure. Dr. Kristyn Brandi, a family planning specialist at Rutgers New Jersey Medical School, told Vox that a 1 in 1,000 failure rate is better than the average rates.

“It sounds, actually, like a quite safe facility,” she said.

Brandi said that abortion is “not only very safe, but it works very well,” though there is a “failure rate” between 1 percent and 5 percent.

“I don’t know why people would be keeping track of these things other than trying to use public health or regulation to try to manage people’s bodies,” Brandi added.

The Trump administration similarly admitted that it tracked the menstrual cycles of migrant girls in government custody in an effort to block them from seeking abortions, according to documents obtained by the Democratic group American Bridge.

Rodriguez said that Missouri’s effort “shadows the Trump administration’s history of tracking the periods of refugee girls under the government’s care.”

Rodriguez told Vice News that Williams hatched the effort as a way to help the government shut down the Planned Parenthood and end abortions in the state. Earlier this year, Republican Gov. Mike Parson signed a bill that would ban abortion after the eighth week of pregnancy.

“As part of Gov. Parson’s effort to end abortion access in Missouri, Williams manufactured a solution in search of a problem,” she said.

“Governor Parson must immediately investigate whether patient privacy was compromised or laws broken and determine if this is a person who Missourians can be comfortable behaving in a position of public trust,” she said in a statement.

Sen. Cory Booker, D-N.J., was the first presidential candidate to weigh in on the controversy, calling the spreadsheet “deeply disturbing.”

“The decision to have an abortion should be between a woman and her health care provider, free from government interference,” he tweeted. “This abuse of power by Missouri Republicans is dystopian.”