Rep. Louie Gohmert dropped the name during a public hearing while Rand Paul shared it with millions on Twitter 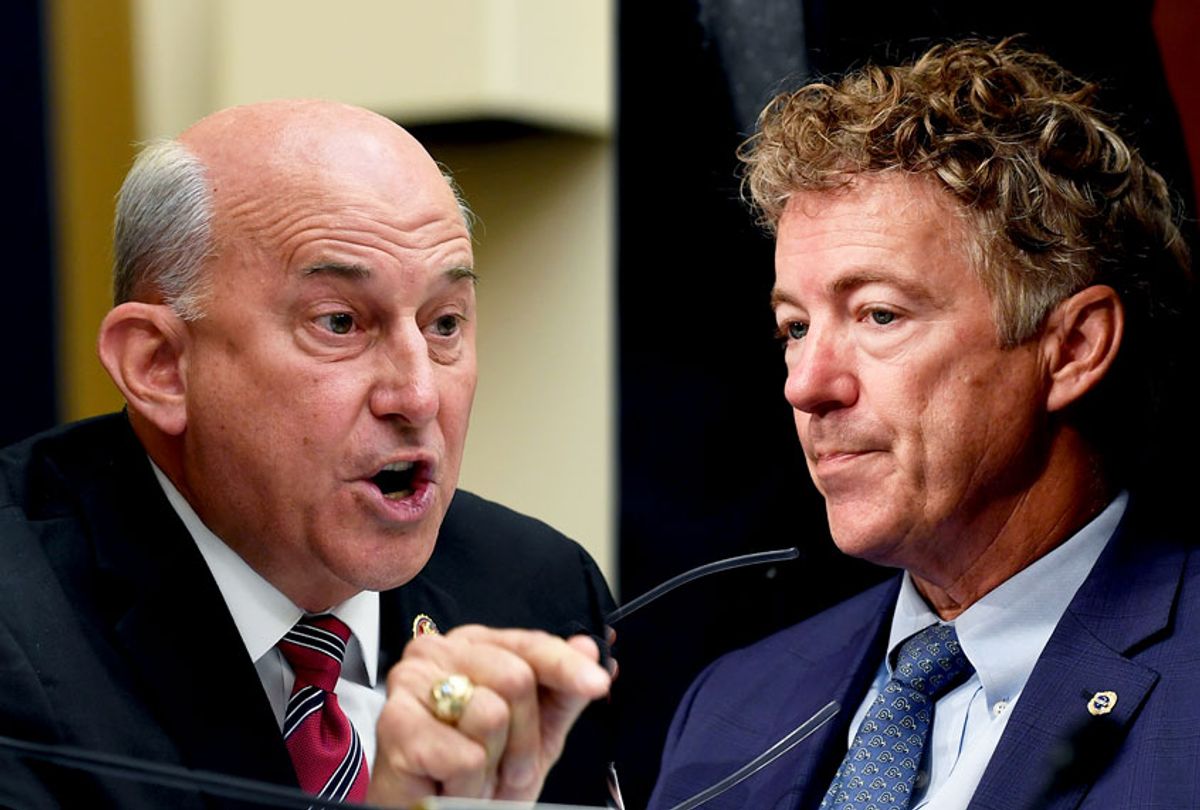 Republican lawmakers are publicly spreading the name of a CIA officer named in a RealClearInvestigations report as the whistleblower who reported President Donald Trump’s pressure on Ukraine to investigate the Bidens.

The unconfirmed report named a 33-year-old CIA analyst as the purported whistleblower, although mainstream media outlets have declined to disclose the name after his attorneys warned that they have received death threats targeting their client. Republican lawmakers have reportedly repeatedly attempted to get the whistleblower’s name on record at impeachment hearings in hopes that it will be released publicly. (Salon has made the decision not to publish this person's name, although it will no doubt soon be in the public record.)

The report, which relied primarily on quotes from former Trump administration officials and a “dossier” compiled on this individual that has circulated around Capitol Hill, identifies the purported whistleblower as a “registered Democrat” who worked on the National Security Council under the Obama administration and was held over in the early days of the Trump administration before he was “accused of working against Trump,” according to the report.

As a Ukraine expert on the National Security Council, this CIA analyst is said to have worked closely with Vice President Joe Biden, who was Obama’s point man on Ukraine. The whistleblower’s attorneys have declined to confirm his identity and have condemned the attempts to expose him.

But the report was not the first public mention of the CIA analyst’s name.

“A lot of us in Washington know who it is,” Gohmert told a Dallas radio station after the hearing, claiming that the whistleblower is a “very staunch Democrat” who was “supposed to be a point person on Ukraine, during the time when Ukraine was its most corrupt, and he didn’t blow any whistles on their corruption."

After the report was published, Sen. Rand Paul, R-Ky., shared the claims with his 2.6 million followers.

The name quickly spread among conservative circles and the report was shared by right-wing pundits like Ann Coulter and reporters for far-right news outlets like The Daily Wire.

Despite repeatedly sharing the report, Coulter expressed doubts that the CIA analyst cited is actually the whistleblower.

“This has to be a fake-out!” she tweeted. “Even the Democrats can't be so corrupt and stupid to accept THIS guy as a ‘whistleblower’ against Trump.”

Radio host Rush Limbaugh also named the purported whistleblower on his show and disputed that he was entitled to whistleblower protection.

"This guy’s a leaker. He’s not a whistleblower," Limbaugh said.

“He’s 30-some-odd years old. I’ve got a picture. It looks like the pajama boy in the Obama ad that they ran back during, I think, the first term,” Limbaugh said, referencing a photo included in the report showing the CIA analyst at age 18 years.

Gohmert made a similar argument in a speech on the House floor Thursday, claiming that the person who reported Trump’s call was using whistleblower status to avoid prosecution.

“It could make sense if you’re a co-conspirator in trying to bring down a duly elected president that you might want that whistleblower status,” he said, according to The Dallas Morning News.

Trump himself has repeatedly called for the whistleblower to be publicly named.

Despite the Republican drive to reveal the whistleblower's identity, outing him would change little or nothing about the impeachment inquiry. The acting director of national intelligence, the intelligence community inspector general and the top lawyer at the CIA — all of them Trump appointees — reviewed the whistleblower complaint, found it “credible” and referred it to the Justice Department for possible prosecution. The DOJ did not pursue the allegations.

In the weeks since the whistleblower complaint was released, the White House has released a partial call transcript that confirmed many of the whistleblower’s claims, even though it omitted specific references to Biden that were made on the call, according to Lt. Col. Alexander Vindman, a National Security Council Ukraine expert who testified to Congress.

Since the partial transcript was released, officials from the National Security Council and the State Department have confirmed to impeachment investigators that there was a quid pro quo between Trump and Ukraine. Sen. Ron Johnson, R-Wis., admitted as much in public, as did acting White House chief of staff Mick Mulvaney, before trying to walk it back.

"Our client is legally entitled to anonymity. Disclosure of the name of any person who may be suspected to be the whistleblower places that individual and their family in great physical danger,” the statement said. “Any physical harm the individual and/or their family suffers as a result of disclosure means that the individuals and publications reporting such names will be personally liable for that harm. Such behavior is at the pinnacle of irresponsibility and is intentionally reckless."