Hillary Clinton says the GOP is grooming a Democrat to make a third-party run. But we can ensure majority rule wins 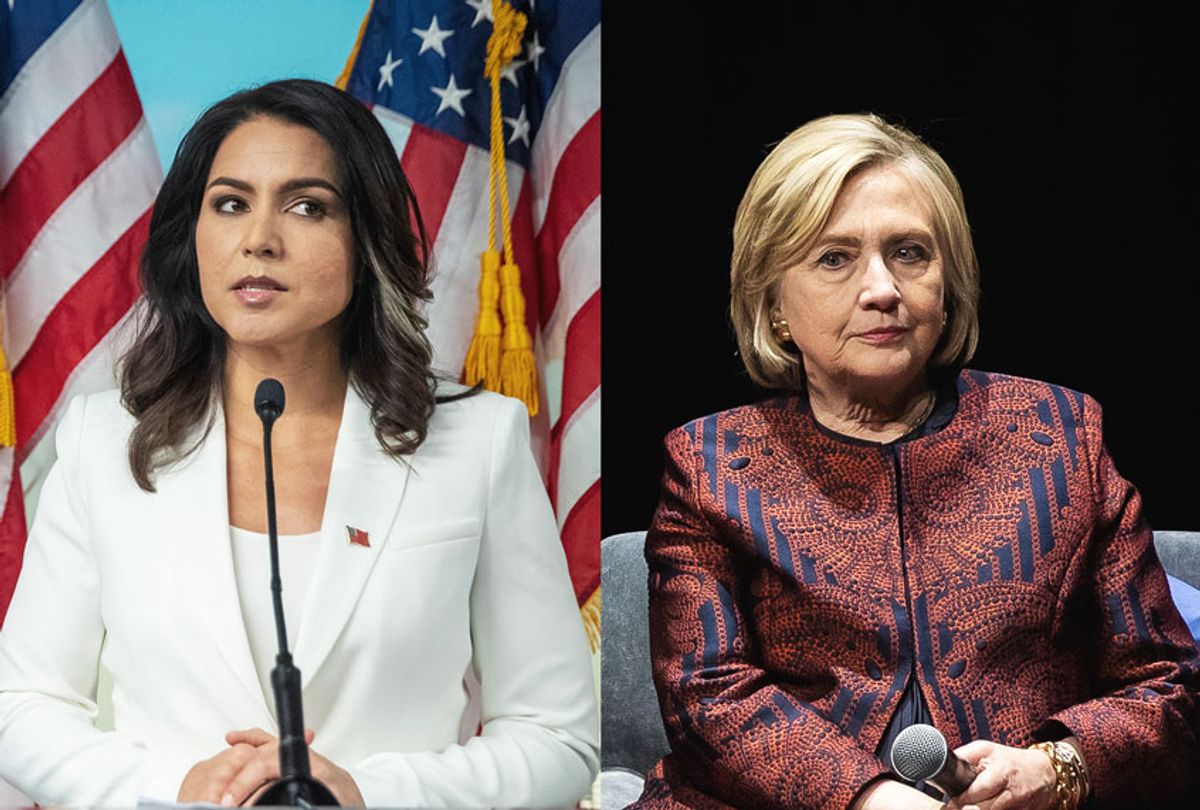 It's time to end the “spoiler wars” once and for all.

Clinton also suggested that Republican interests were grooming a potential third-party candidate for 2020. While she didn't mention anyone by name, Clinton said it was a woman currently in the Democratic field. Speculation immediately centered on Rep. Tulsi Gabbard of Hawaii, who fired back quickly and angrily at Clinton and the party itself.

There’s plenty of reason to be concerned about Russian and other foreign influence on our elections. Third parties, however, did not keep Clinton out of the White House.

Yes, Donald Trump captured the Electoral College by a mere 80,000 votes across three states, Wisconsin, Michigan and Pennsylvania. And yes, in each of those states, Stein’s vote total was larger than Trump’s margin of victory.

However, Libertarian candidate Gary Johnson captured three times as many votes as Stein in all three of those states. Clinton can’t add every Stein vote to her column without considering Johnson’s totals.

Any race as close as 2016 will be dissected by partisans and historians for years to come, let alone the participants. Clinton has obviously spent sleepless nights thinking about the Green Party and the dissension sown by Russians across social media, some of it designed to dampen enthusiasm for Clinton and support the Green Party nominee.

But while Clinton is correct to amplify this threat posed by Russian bots and Facebook, there's a better way to protect our elections than to suggest that third party candidates have nefarious intent and cast aspersions on third party candidates. We can stop this endless, negative debate by enacting ranked choice voting. Then we could ensure majority rule without criticizing voters who understandably expect and desire a full spectrum of choices.

Ranked choice voting is a proven fix that makes sense for everyone. It’s easy. Voters get the option to rank the candidates by preference, top to bottom. If a candidate gathers 50 percent of first choices, he or she wins as usual. If not, an instant runoff ensues until someone achieves a majority — the last-place candidate loses, and those ballots count immediately for their next ranked candidate. The advantages are many-fold: Our elections benefit from more competition and choices, while ensuring that voters can support the candidate they like the most without worrying they’re helping elect the candidate they like least.

In polarized times, RCV helps guarantee that the candidate with the widest support wins. In 2016, for example 10 states — Colorado, Florida, Maine, Michigan, Minnesota, Nevada, New Hampshire, Pennsylvania, Utah and Wisconsin — awarded their Electoral College votes to a presidential candidate who won less than 50 percent of the votes. Third parties could certainly have tipped the balance.

With RCV, a discontented Democrat or liberal voter could cast a ballot for the Green Party, for example, and then rank the Democratic nominee second. Or, a libertarian or frustrated Never Trumper could back an alternative candidate first, and then President Trump second. Voters could say more with their vote, and we’d emerge from every election knowing that the winner had the widest popular support and ready to come back together as a nation, without bitter debates about legitimacy or minority rule.

Third parties have been at the forefront of proposing important changes throughout American history, introducing policies that both parties have later adopted. Like it or not, they’re part of the landscape. This gives politicians two choices: Go to war with voters and tell them that they’re wasting their vote by backing an independent. Or, embrace policies that enhance choice and make democracy stronger.

Clinton’s right about this: In 2016, foreign actors turned choice against us. They lifted up Stein in order to undercut Clinton, and helped elect a president without a popular majority. Democrats have done the same thing themselves: In Montana in 2012, for example, a dark money campaign supported by liberal interests backed the libertarian candidate for U.S. Senate as the “real conservative.” He won almost 7 percent of the vote, pushed the Republican candidate down to 44.6 percent, and allowed a Democrat, Jon Tester, to win the seat. He holds it to this day.

We can do better. Five Democratic primary and caucus states will use RCV in 2020 for either early voting or the election itself. New York City next month is poised to adopt it for its elections. Maine — which already uses RCV for most of its state and federal elections — expanded its use for presidential races earlier this year. Eleven cities are using RCV on November 5 — five for the first time.

The time for more states to act is now. No one knows what the 2020 field will look like. There could be multiple independents. Gabbard isn’t the only possible candidate. In the last month alone, trial balloons have been floated on behalf of Walt Disney CEO Bob Iger, the billionaire CEO of Dick’s Sporting Goods,  as well as former New York City mayor Michael Bloomberg. Bloomberg associates have suggested he might seek a center lane if Democrats nominate Elizabeth Warren. Congressman Justin Amash might run as the Libertarian Party nominee. Meanwhile, impeachment proceedings could hasten a conservative challenge to Donald Trump; his removal by the Senate might even result in Trump running as an independent.

Our politics are messy and polarized. That’s not going away. We can spend the next year trying to hector independents out of the race. We can call them spoilers and question their patriotism. Or, we could embrace RCV and trust Americans to put things back in order all by themselves.