Don Jr.: My dad can’t be "racist" because he let me play video games with Michael Jackson

“It sure sounds odd that he’d let his son vacation with a black man or hang out with Michael Jackson," he wrote. 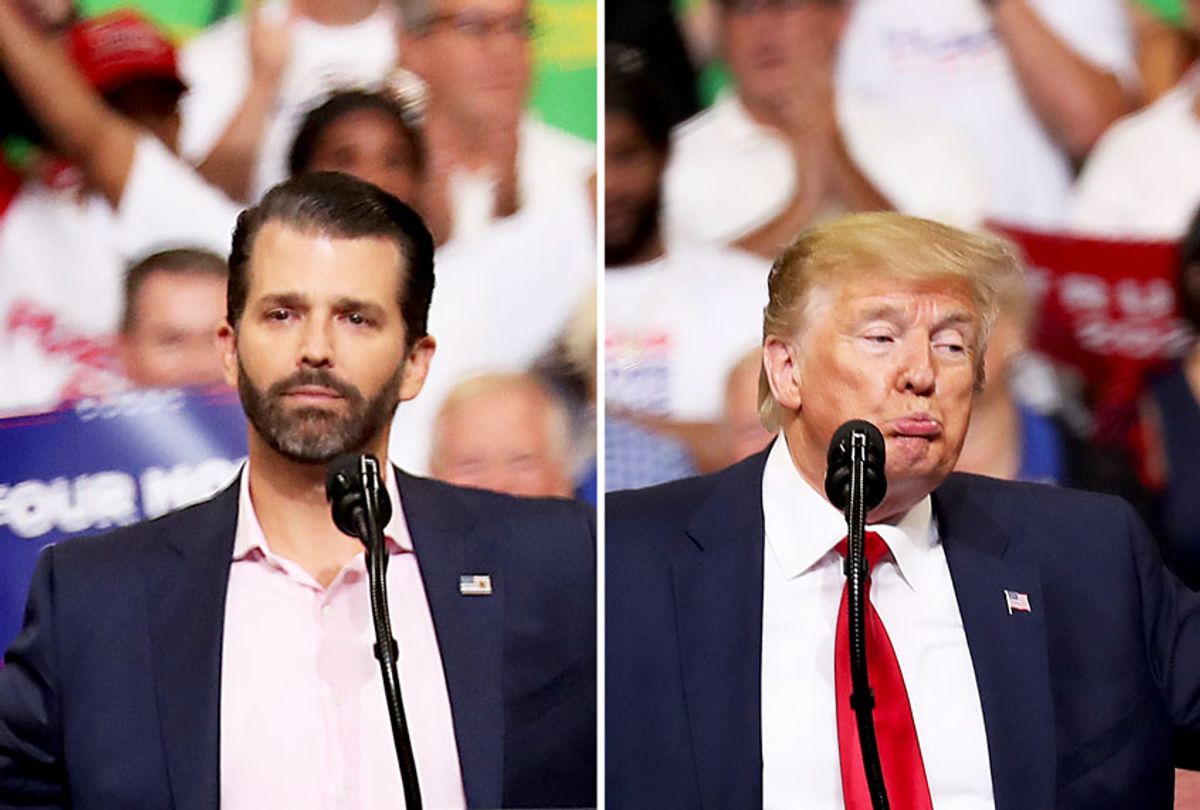 Donald Trump Jr. attempted to counter racism allegations against his father by noting in his new book that the future president allowed him to “hang out with Michael Jackson” as a child.

Trump Jr. wrote in his new book “Triggered: How the Left Thrives on Hate and Wants to Silence Us” that he frequently played with the King of Pop as a child and even went on vacation with him.

"One day in Eric’s room, my father saw how much Michael enjoyed playing Teenage Mutant Ninja Turtles with us on Nintendo and told him he could take the game home. My game!" the president’s 41-year-old adult son wrote. "To this day, Eric says it was his game because it was in his room, but I know whose game it was. I’d worked a summer job to pay for it! And here was Michael Jackson, probably a billionaire at this point, and he took it!”

Trump Jr. went on to cite his time with Jackson and an occasion when he went on vacation with former NFL star Herschel Walker to defend his father against racism allegations.

Considering "all the things my father has been called, particularly a 'racist,'” he wrote, “it sure sounds odd that he’d let his son vacation with a black man or hang out with Michael Jackson, doesn’t it?"

Trump Jr. noted that the “recent revelations” about Jackson’s alleged child molestation “came as a shock” to him.

"My experience with Michael does not include any of what he’s been accused of," he wrote.

Elsewhere in the book, Trump Jr. compares his father’s experience with special counsel Robert Mueller and the FBI investigation into his campaign’s ties to Russia to the FBI’s smear campaign against Martin Luther King Jr.

"Even now there are forces deep inside our government trying to bury evidence of wrongdoing against my father ... If those people have a hand in writing the history of the Russia hoax — and believe me, they will try — they will say that the Mueller investigation was based on real evidence and that Donald Trump and his administration really did commit obstruction of justice,” Trump Jr. wrote. "If you don't think something like that could ever happen, consider this: it's happened before — to, of all people, Martin Luther King Jr."

"J. Edgar Hoover and the FBI kept a file on Dr. King for years,” he wrote. “After living through the past three years, can you honestly say that anything has really changed? Or is it more of the same?"

On Monday, President Trump, who has accused former Vice President Joe Biden’s son Hunter of enriching himself from his father’s position, plugged his son’s book on Twitter.

“A great new book that I highly recommend for ALL to read,” he wrote. “Go order it today!”

Trump Jr. admitted in an interview with CBS News on Tuesday that he has “benefited from my father’s name” but insisted that his situation was different from Hunter Biden because “we were international business people.”

“More importantly, we stopped doing new deals. We have deals that we were obligated to finish that we signed up in 2010,” he claimed.

“But you have expanded some of those deals. You're expanding in Scotland, you've traveled to India, to Indonesia,” CBS host Anthony Mason replied.

“We have to finish out the deals that we have that are existing. We have literally a contractual — we have not signed a new deal abroad since my father took the presidency,” Trump Jr. claimed. “Now we'd be able to legally. We chose not to and did that publicly, so as not to even create the notion of impropriety.”

The Washington Post fact-checked that claim and found that the Trump Organization keeps “expanding and cashing in on their foreign investments.”

“The president’s disclosure forms and the continued existence of Trump properties around the world show it’s false,” The Post reported, adding that “Trump’s sons have been busy selling assets to foreign individuals, expanding or adding onto their existing deals and investments in foreign countries, and collecting payments in U.S. properties from foreign governments.”