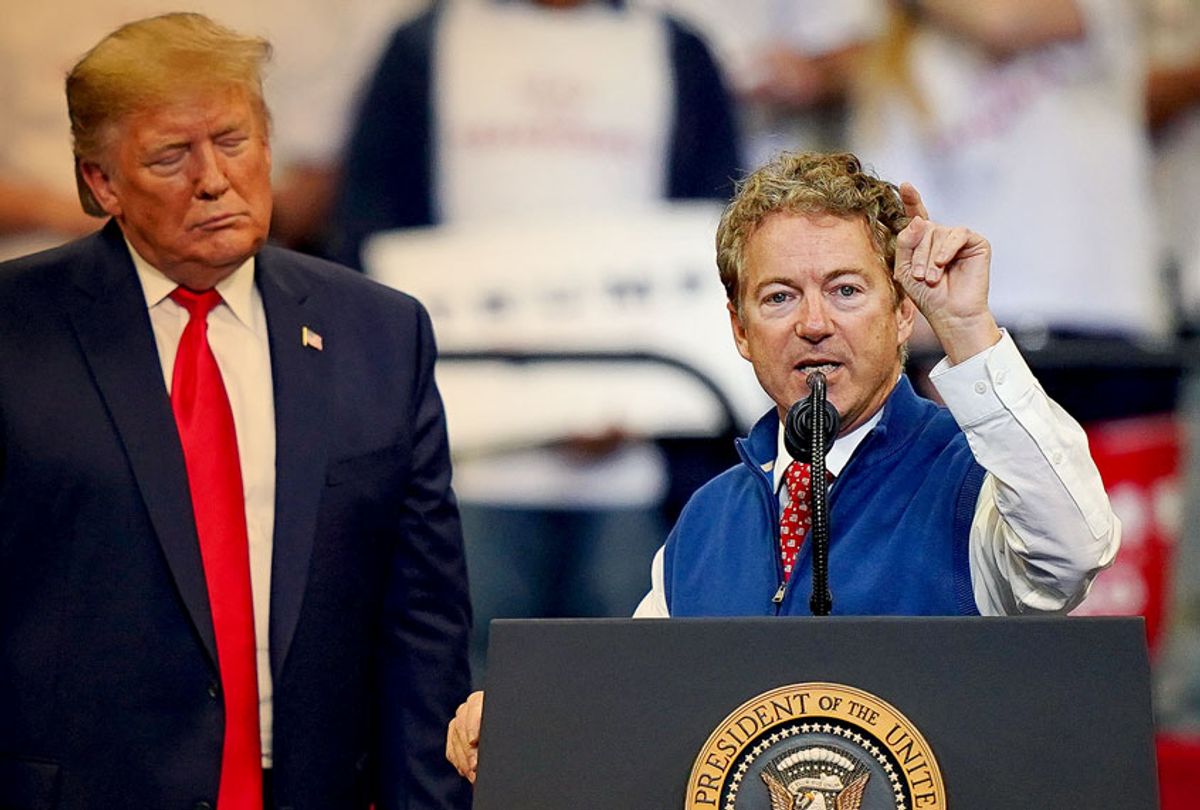 Russian state-owned media outlets seized on a report shared by Sen. Rand Paul, R-Ky., naming a man alleged to be the Ukraine whistleblower this week.

“We also now know the name of the whistleblower,” Paul said while standing beside President Donald Trump at a rally in Kentucky on Monday. “I say tonight to the media: Do your job, and print his name.”

Paul’s comments came after he shared a report from RealClearInvestigations to millions of his Twitter followers naming a 33-year-old CIA analyst who previously worked on the National Security Council under the Obama and Trump administrations as the alleged whistleblower.

“As if on cue,” Russian media-watcher Julia Davis wrote at The Daily Beast, “the Kremlin-controlled heavy hitters — TASS, RT, Rossiya-1 — disseminated the same information. But unlike Rand Paul, one of the Russian state media outlets didn’t seem to find the source — Real Clear Investigations — to be particularly impressive, and claimed falsely that the material was published originally by the Washington Post.”

Mark Zaid, one of the whistleblower’s attorneys, slammed the Republican Party on Twitter in response to the report.

“There was a time when GOP was the party of strength against Russia,” he tweeted. “Now what they do becomes a pawn for Russian disinformation campaigns and attacks against our Democracy.”

Paul has not publicly stated the purported whistleblower’s name, though Rep. Louie Gohmert, R-Tex., said the alleged name of the CIA analyst discussed in the report during a completely unrelated House Natural Resources hearing last month.

Asked why he has not disclosed the name of the alleged whistleblower, Paul told reporters on Tuesday that he “probably will.”

"I'm more than willing to, and I probably will at some point,” Paul said, according to The Hill. “There is no law preventing anybody from saying the name.”

A reporter from The Hill told Paul on Tuesday that “whistleblower blower laws protect the whistleblower.”

“You know it’s illegal to out a whistleblower?” the reporter asked.

“You’ve got that wrong,” Paul claimed.

“No, we don’t,” the reporter replied.

Zaid wrote on Twitter that “current laws & policies are still on our side” after Paul’s claim. Responding to Paul’s threat to name the purported whistleblower, Zaid said Paul would be “personally responsible for anything harmful that happens.”

Andrew Bakaj, another attorney for the whistleblower, hinted at legal options if Paul moves forward with his threat.

“If the President or any Member of Congress engages in rhetoric or activity that places my client in danger, they will be held personally responsible,” he tweeted. “As I have already stated: my team and I are keeping all options on the table.”

Many of Paul’s fellow Republicans also hung him out to dry after his remarks.

Sen. Chuck Grassley, R-Iowa, a staunch defender of whistleblower protections, rejected Paul’s claim that the whistleblower was not protected by the law.

Sergio Gor, a spokesman for Paul, told the outlet that the “whistleblower statute protects the accuser from being fired but says nothing about skeptics revealing his name.”

“The whistleblower statute is there for a reason,” said Sen. John Thune, R-S.D., the No. 2 Republican in the Senate. "And I think we need to respect the law where whistleblowers are concerned."

Sen. Mitt Romney, R-Utah, rejected Paul’s claim that the whistleblower should only be protected from reprisal.

“Whistleblowers should be entitled to confidentially and privacy, because they play a vital function in our democracy,” Romney said.

Not all Republicans in the Senate broke with Paul. Sen. Lindsey Graham, R-S.C, and Sen. John Barrasso, R-Wyo., suggested that Trump has the right to face his “accuser,” referring to the whistleblower even though a second whistleblower corroborated his report, numerous Trump appointees found the complaints “credible” and numerous Trump administration officials have since testified that Trump tried to extort Ukraine into investigating the Bidens by withholding military aid allocated by Congress.

The whistleblower’s attorneys said that the whistleblower would be willing to submit answers to Republican lawmakers’ questions in writing, which party members rejected.

Bakaj warned lawmakers that any attempt to reveal his client’s identities would have devastating consequences beyond the impeachment inquiry.

"If Congress and others do not protect my client's anonymity, which my client is afforded to by law,” Bakaj told Politico, “not only does it jeopardize their safety, but it jeopardizes an entire system that took decades to build. It will destroy effective congressional oversight for years to come.”