Evidence in Stone case: Trump may have had "direct role" in team's leverage of Russian interference 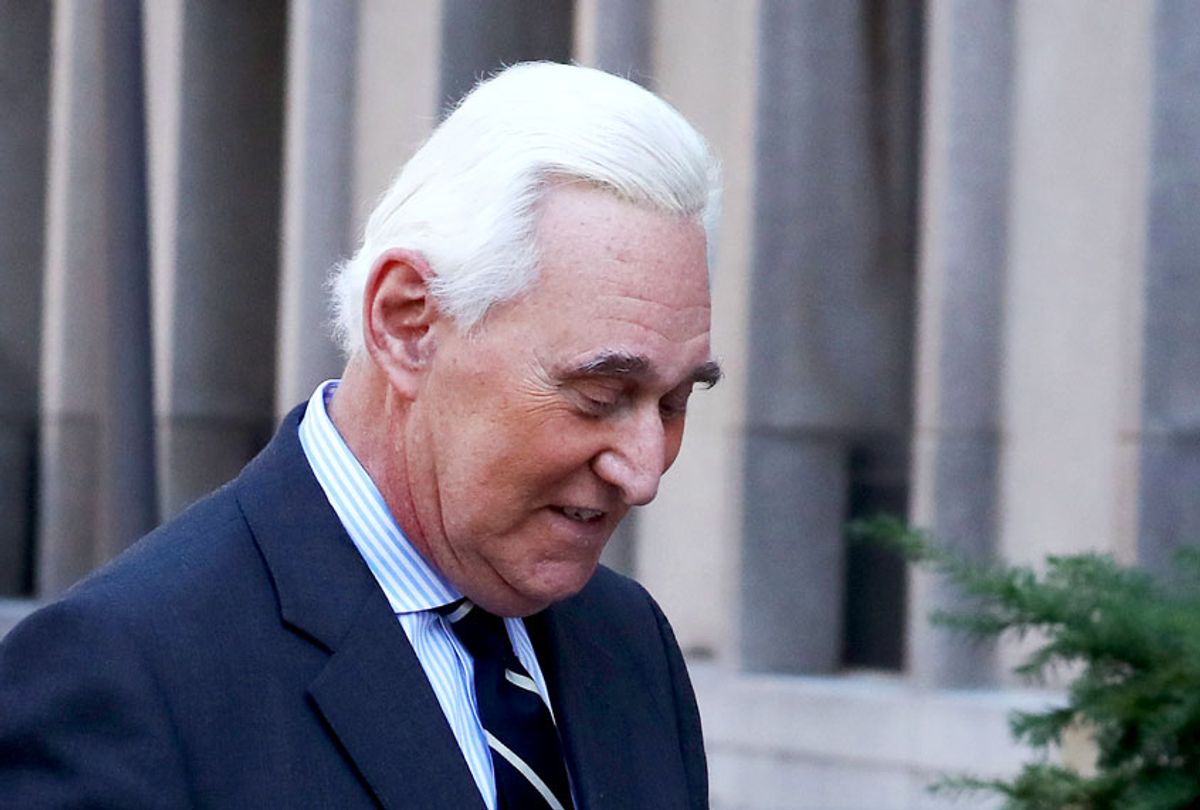 Roger Stone, former advisor to President Donald Trump, arrives for the second day of his trial at the E. Barrett Prettyman United States Courthouse on November 6, 2019 in Washington, DC. Stone has been charged with lying to Congress and witness tampering. (Mark Wilson/Getty Images)
--

President Donald Trump may have played a more significant role in his campaign's effort to leverage Russian interference in the 2016 election cycle than previously known, according to phone records introduced in federal court Wednesday.

The calls were reportedly disclosed by prosecutors on the first day of arguments in the criminal trial of Roger Stone, a longtime associate and informal adviser to the president, who faces charges of lying to federal investigators about his efforts to connect with WikiLeaks during the 2016 presidential campaign.

Prosecutors said Stone spoke to Trump six times during the summer of 2016, including on the day the Democratic National Committee announced it was hacked. The U.S. intelligence community concluded that Russian intelligence officers released tens of thousands of emails stolen from Democrats to WikiLeaks, which were disseminated at critical points during the campaign cycle in an attempt to boost Trump's campaign and hurt his rival: Hillary Clinton.

"The phone records are the first concrete suggestion that Trump may have had a direct role in his campaign’s effort to benefit from Russia's hidden hand in the election," wrote Sharon LaFraniere, an investigative reporter at The New York Times. "At the very least, the calls and other evidence underscored the eagerness of senior campaign officials and other Trump associates to reap the rewards of what the former special counsel Robert Mueller later called a sophisticated and alarming covert Russian influence operation."

News of the calls come as Trump faces an impeachment inquiry in the House of Representatives over alleged efforts to solicit Ukraine to interfere in the 2020 election.

While Mueller probed the links between WikiLeaks and the Trump campaign during his investigation into Russian interference in the 2016 election, the phone calls between Trump and Stone were not noted in the version of Mueller's report publicly released last spring. Officials redacted evidence related to ongoing cases, including the one against Stone.

Stone has repeatedly denied any contact with Russia or WikiLeaks. He has claimed that he had no prior knowledge of the hacked Democratic emails or that WikiLeaks would release them ahead of the election. Stone has argued that he made predictions about the organization's plans based on tips from associates with inside knowledge and public remarks by Julian Assange, the publisher of the whistleblower website. But WikiLeaks and Assange have also said they never communicated with Stone.

WikiLeaks made two separate email dumps during the heated 2016 race that altered the trajectory of the presidential election. Deputy Attorney General Rod Rosenstein claimed the hackers created fake online personas — DC Leaks and Guccifer 2.0 — in an effort to disguise the Russian origins of their work. After the 2016 election, Stone admitted to exchanging direct but benign messages with Guccifer 2.0 over Twitter.

Stone has been charged with seven felonies, including obstruction of justice, making false statements and tampering with a witness. His case is focused on his testimony to the House Intelligence Committee in September 2017, when the panel was investigating Russian interference in the 2016 election.

Stone allegedly went to extreme lengths to conceal his lies to the committee by using radio host Randy Credico as a conduit, according to Zelinsky. He allegedly pushed Credico to lie to investigators by threatening to kidnap his dog.

Stone also failed to disclose hundreds of text message and email exchanges related to his efforts to contact Assange and relay information to the Trump campaign, prosecutors said.

Stone's lawyer, Bruce Rogow, defended his client by arguing that Stone was misled by lawmakers into thinking the hearing would focus on Russian interference instead of WikiLeaks.

"We think that there was no corrupt intent in what Mr. Stone said," Rogow said. "These people were playing Mr. Stone. Mr. Stone took the bait."