Tucker Carlson claims that he is in more danger than the whistleblower: "Live my life for a week!"

“He’s not a whistleblower at all — that’s a guy who disagrees with Trump’s foreign policy views,” Carlson alleges 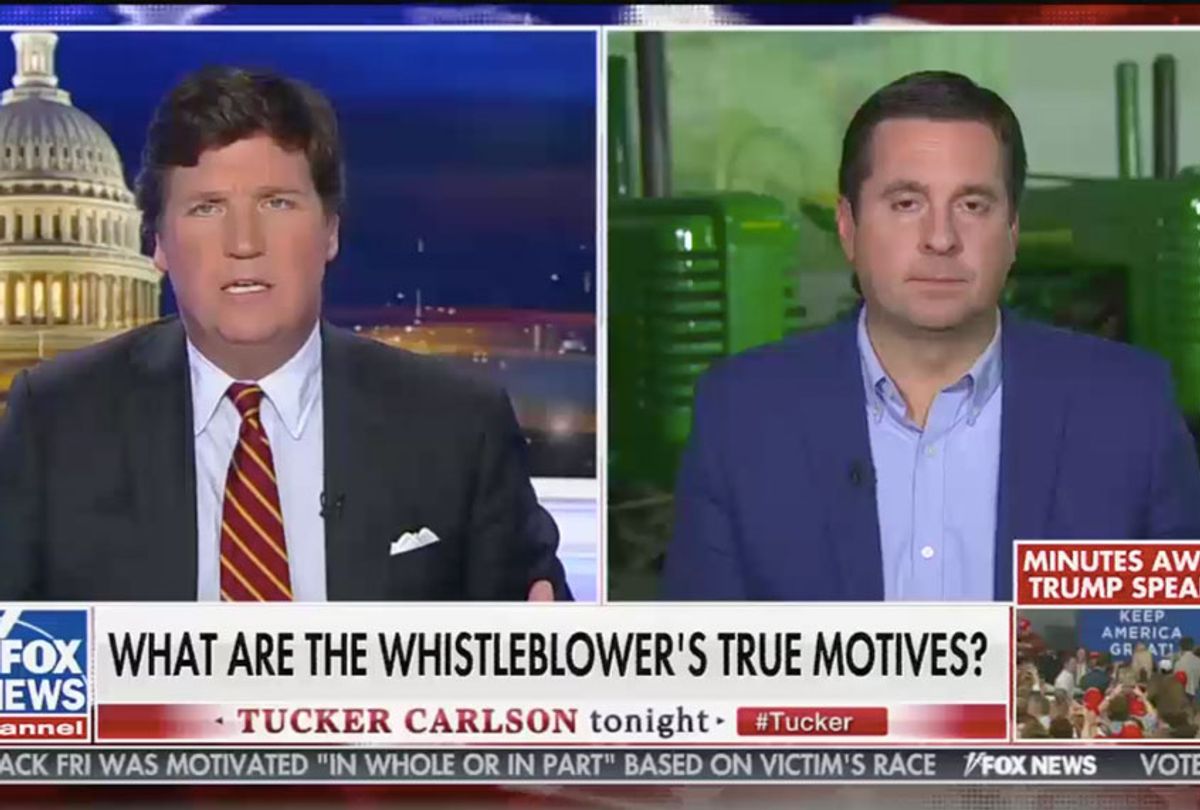 Tucker Carlson claimed to Rep. Devin Nunes, R-Calif., that the whistleblower who exposed President Donald Trump’s phone call to Ukrainian President Volodomyr Zelensky does not face the same danger that he faces every day just for being a Fox News host.

"Live my life for a week,” Carlson said Wednesday on his prime time program.

Discussing the warnings of House Intelligence Committee Chairman Adam Schiff, D-Calif., that individuals trying to leak the identify of whistleblower were putting the official's life in danger, Carlson rhetorically asked, “Why don’t you be quiet, you demagogue?”

Carlson accused Schiff of using "the power of his aggression and the boldness of his claims" to bully news organizations against doing so.

“He’s not a whistleblower at all — that’s a guy who disagrees with Trump’s foreign policy views,” Carlson said of the government official.

After Nunes agreed with Carlson’s arguments, the Fox News host then added that “I'm not naming him, because I can't get anyone to confirm that it's really him. It sounds like it is him., but I don't want to say it unless I can get confirmation. But, I mean, at some point, you know, this is undermining people's confidence in the government.”

Carlson agreed with Nunes and then added, “His life's in danger? Oh spare me. Live my life for a week.”

Although Carlson has emerged as one of Trump’s most outspoken defenders in the media, earlier this year he claimed to Salon that he tried to minimize how often he mentioned the president during his program.

“In general I think that we talk too much and think too much about Trump, and that is again probably intentional, because it's a way to wade past the actual conversations which are uncomfortable about who is getting rich and who is not,” Carlson told Salon in January. “In that script and on my show more generally, I really try to be like the one place where we don't have to talk about Trump for an hour, not because it's like some political decision I've made, it's not, but because I just don't think it's that interesting.”

Carlson has been targeted by threats of violence in the past. Last year, he described to The Washington Post how “someone started throwing himself against the front door and actually cracked the front door.” He was not home at the time, but his wife and family were in the house. In a video that circulated online, a mob could be heard chanting, “Tucker Carlson, we will fight! We know where you sleep at night!"

Watch the segment below via Media Matters: