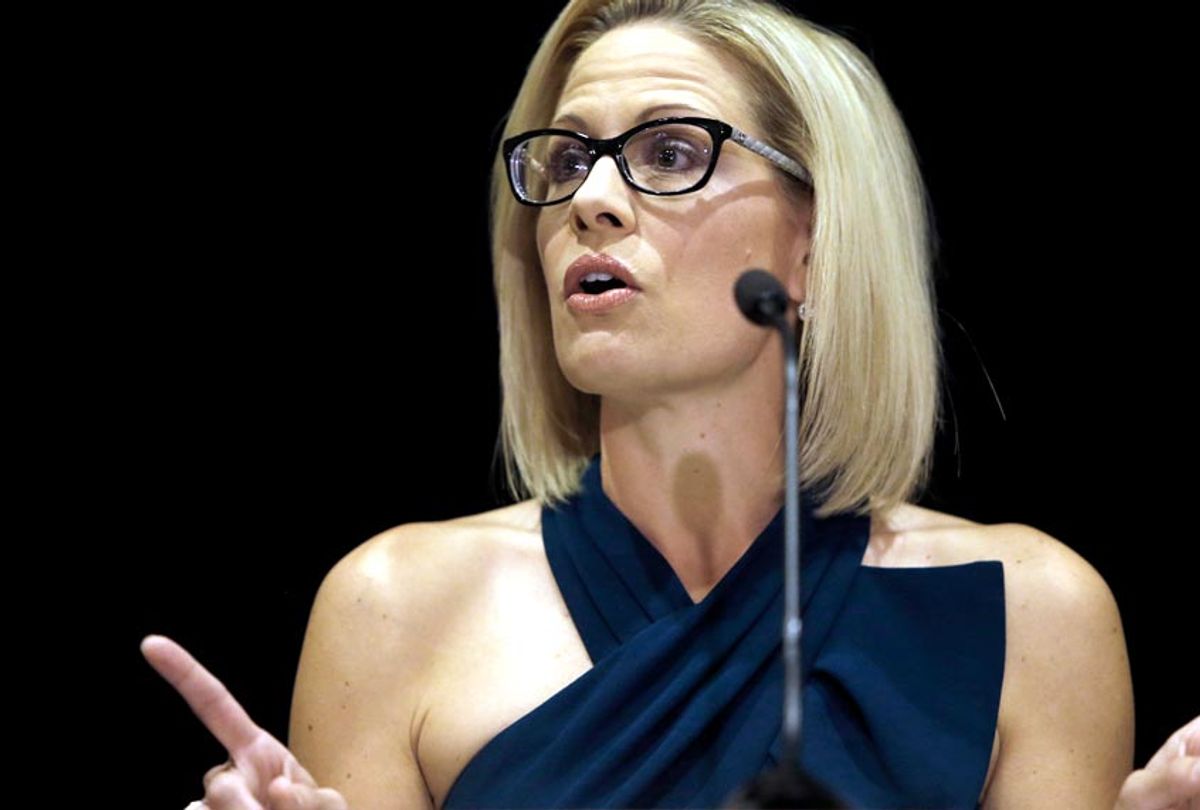 Sen. Kyrsten Sinema, the only Senate Democrat who has not co-sponsored legislation to restore net neutrality, reportedly has financial ties to a super PAC directed by a lobbyist for Comcast, a fervent opponent of open internet protections.

Sludge's Donald Shaw reported Thursday that a possible reason behind Sinema's refusal to join her Democratic colleagues in backing the Save the Internet Act "may be her relationship with a 'dark money' nonprofit called Center Forward that receives substantial funding from cable and telecom industry trade groups and its affiliated super PAC, Center Forward Committee, which is run by a Comcast lobbyist."

"Sinema directed a six-figure donation to Center Forward Committee through a centrist PAC that she used to chair just weeks before the group made big independent expenditures to support Sinema's campaigns," according to Shaw.

Telecom industry lobbying groups have given Center Forward "substantial and consistent donations," Sludge found in a review of tax documents.

Sinema has also benefited from direct campaign contributions from the telecom industry.

"So far this year, Sinema's campaign has received contributions from the PACs of AT&T ($2,000), Verizon ($1,000), and Cox ($2,500), as well as $1,500 from Comcast vice president of federal government affairs Melissa Maxfield," Shaw reported. "She also received $5,000 each from the PACs of Comcast, NCTA, and Charter through her 'Getting Stuff Done' leadership PAC in the second quarter of 2019."

News of Sinema's industry connections came as no surprise to Evan Greer, deputy director of Fight for the Future, a digital rights group that targeted the Arizona Democrat earlier this year over her opposition to the Save the Internet Act.

In March, Fight for the Future crowdfunded a billboard in Phoenix, Arizona that accused Sinema of "siding with corporate donors to kill net neutrality."

"Sinema is arguably the single member of Congress who is carrying the most water for the telecom industry right now and standing in the way of restoring basic net neutrality protections," Greer told Sludge. "By refusing to support the Save the Internet Act she is providing cover for Republicans and kneecapping grassroots efforts to advance legislation that—if we had a functioning democracy—would enjoy widespread bipartisan support."

Greer condemned the bipartisan "net neutrality working group" Sinema formed with Sen. Roger Wicker (R-Miss.) as a "total joke" and "nothing but a smokescreen intended to muddy the waters and confuse the public."

"I have zero questions about why Sinema is doing what she's doing," said Greer. "It's all about the money. She could score easy political points with her constituents by supporting net neutrality, but she's made a calculated decision to appease her big cable donors instead."

The Save the Internet Act, which would reverse the FCC's deeply unpopular 2017 repeal of net neutrality protections, passed the Democrat-controlled House in April with a 232-190 vote. The legislation has stalled in the Senate as Majority Leader Mitch McConnell (R-Ky.) refuses to bring it to the floor.

In a letter to her constituents earlier this year, Sinema attempted to explain her refusal to co-sponsor the Save the Internet Act.

"Regulation of the internet must be done with the utmost care," Sinema wrote, "and reclassifying broadband providers under laws designed in the 1930s for utilities may have serious unintended consequences, including the limitation of certain consumer protections."

Fight for the Future, which obtained the letter in May and published it online, said Sinema's argument "could've been written by Comcast."