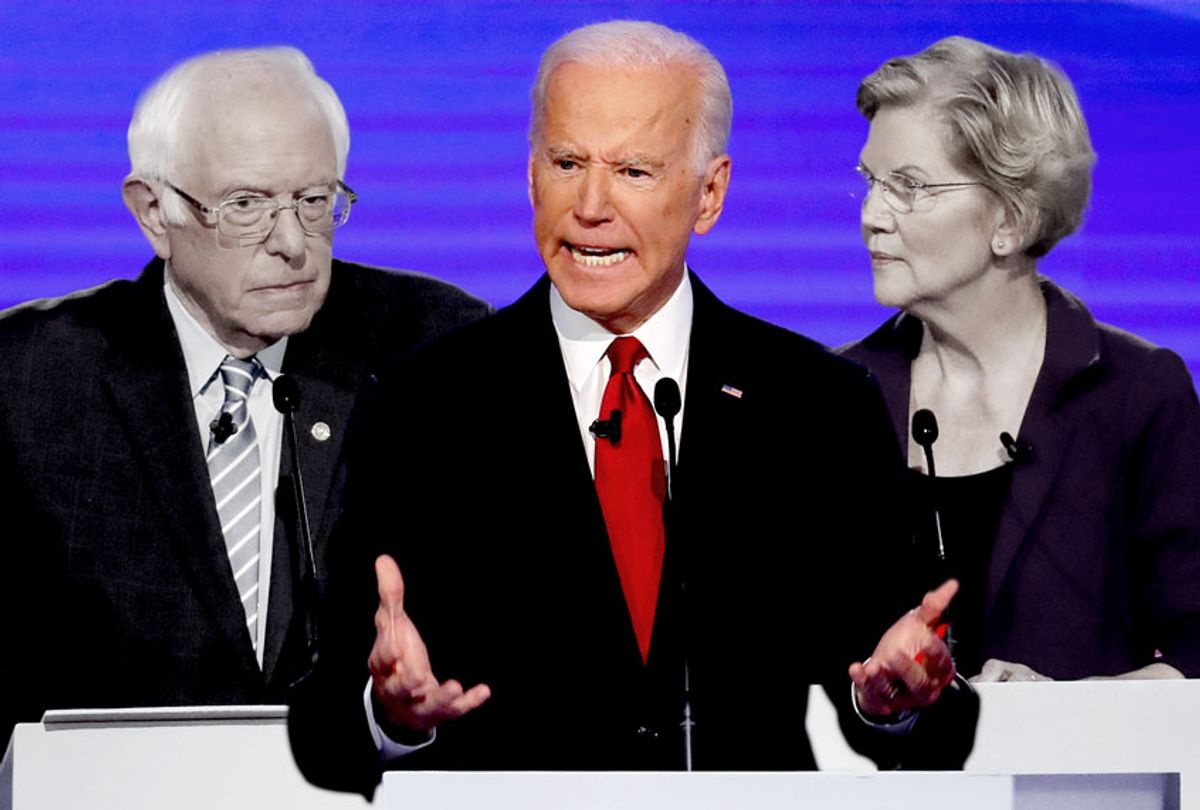 This article originally appeared at FAIR.org as part of the Election Focus 2020 series. Used by permission.

The New York Times' Thomas Edsall has an axe to grind, and the paper loves to let him grind it. Edsall is convinced that the Democrats need to move to the center, in ways that will offend much of the party, in order to appeal to the moderate white “swing” voters he believes are the key to a Democratic victory in 2020.

“Democrats will have to tackle issues that may alienate — and even give offense to — progressives, women, Latinos and African-Americans,” Edsall preaches in his latest column (11/1/19). (Edsall repeatedly makes arguments like this, in which only cisgender, straight white men are never to be betrayed. See, for example, “What’s a Non-Racist Way to Appeal to Working-Class Whites?  NYT’s Edsall Can’t Think of Any,” FAIR.org, 3/30/18, and “NYT Steers Dems Away From the Obvious Formula for Defeating Trump,” FAIR.org, 8/29/19.) 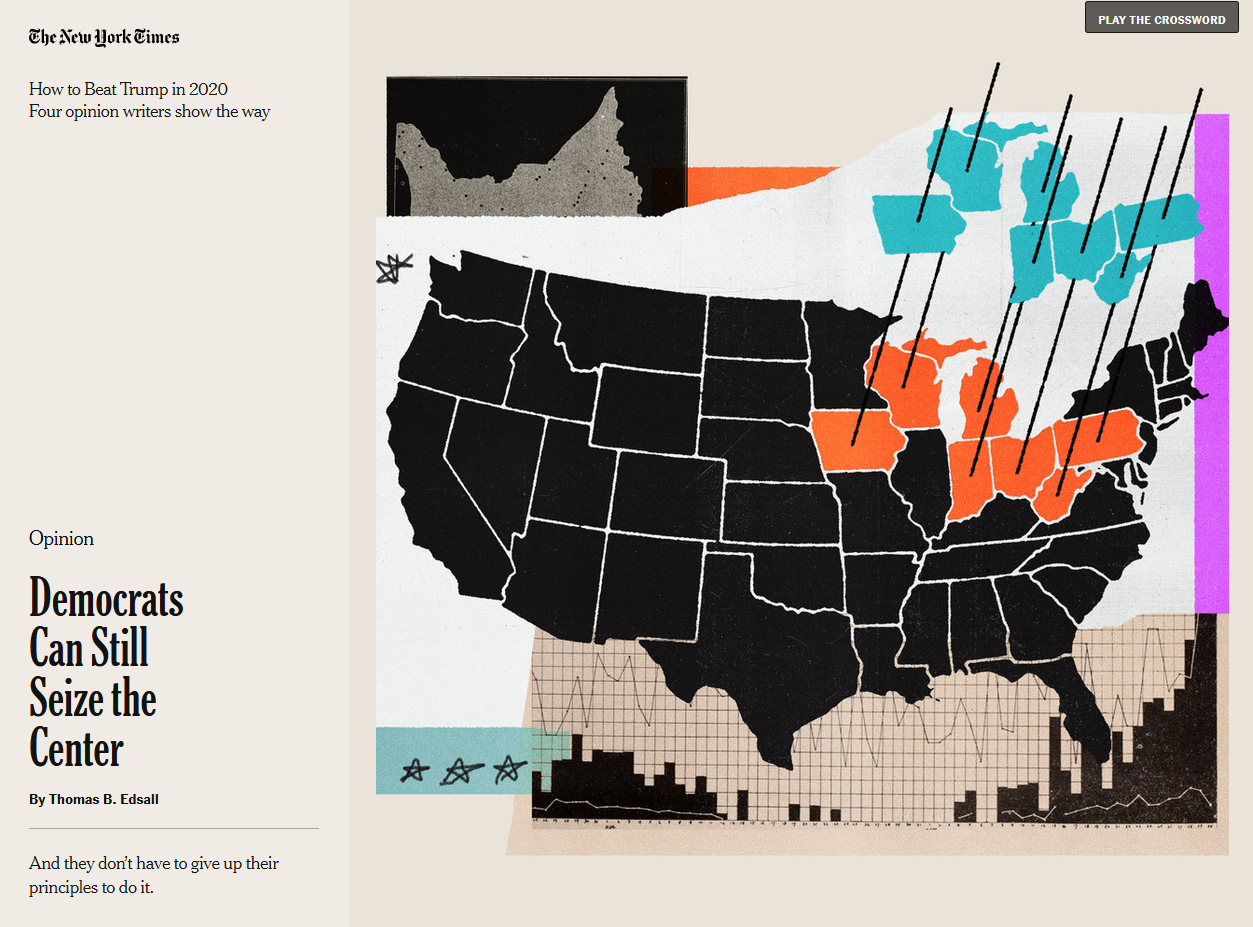 To “seize the center,” says the New York Times' Thomas Edsall (11/1/19), Democrats have to be willing to “alienate — and even give offense to — progressives, women, Latinos and African-Americans.” (Note that this leaves a “center” that includes fewer than 30% of voters.)

Why is Edsall so convinced of this strategy? Well, in this column, he looks at evidence that Trump won because of his “aversion to political correctness,” and concludes that jumping on that train is how Democrats will win back the “swing electorate.”

At least as problematic, though, are the questions Edsall is asking. He plies these right-wing “experts” with questions about “why immigration, identity politics and political correctness remain problematic for Democrats.” 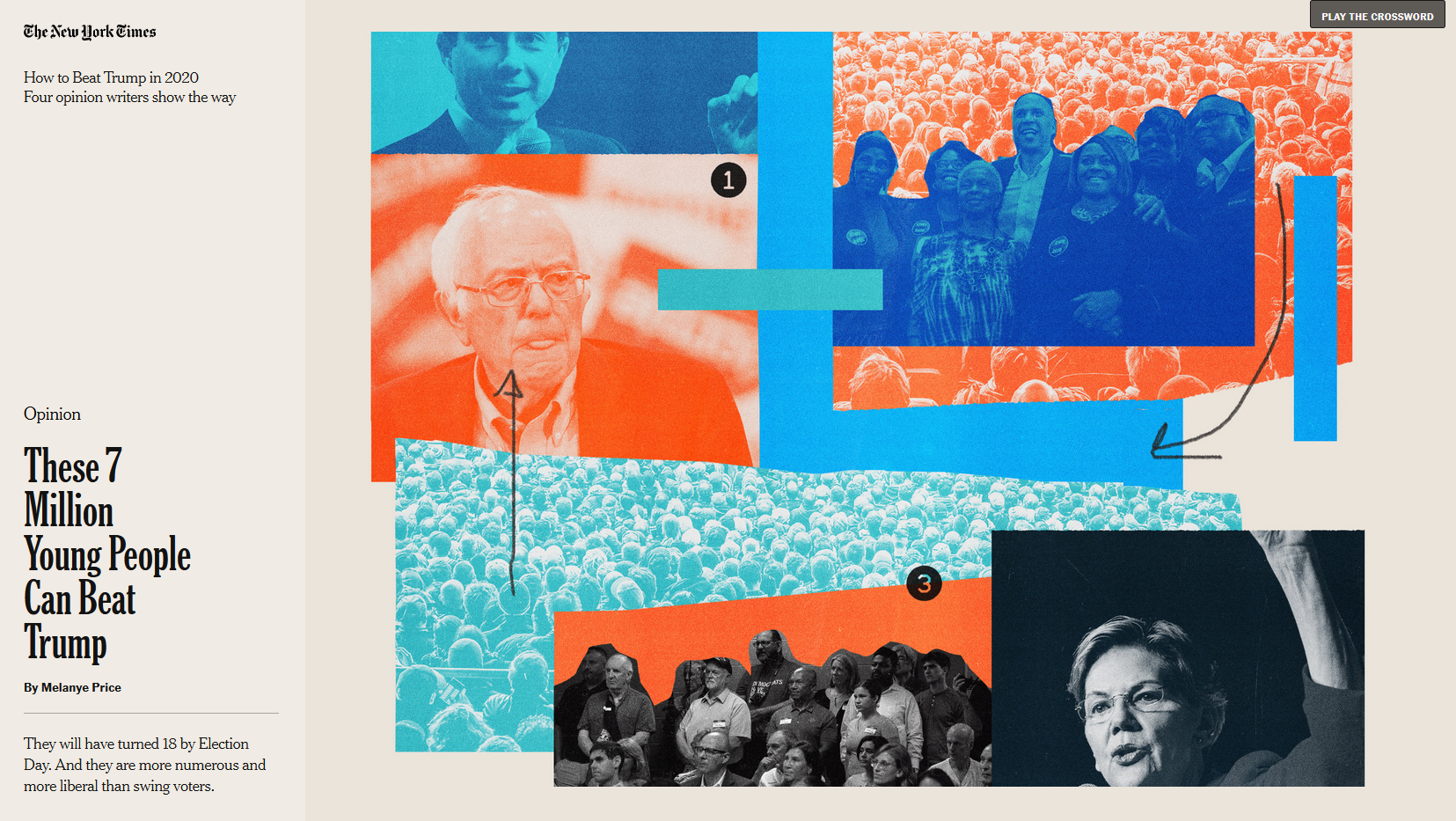 Melanye Price (New York Times, 11/1/19) argues that Elizabeth Warren (and Julián Castro) “seem most capable” of building a multiethnic coalition of young people, whereas Bernie Sanders “has made limited inroads in minority communities”—even though Warren’s supporters are considerably older and much whiter than Sanders’ (Pew, 8/16/19).

The problem here is twofold. First, persuading the “swing electorate” is not the only — or clearly best — way for Democrats to win, as the left always points out. The Times is not unaware of this, and in this instance they present Edsall’s argument as part of a package; it’s  accompanied in part by a column by Melanye Price (11/1/19), who makes the case for focusing on turning out the youth vote, which is increasingly not white, and increasingly leans heavily Democrat. (It’s worth noting that while Price claims Elizabeth Warren and Julián Castro “seem most capable” of appealing to young people, Bernie Sanders has a much higher percentage of under-30 supporters — and supporters of color — than the other leading candidates.)

The demographic future of this country does not bode well for a party built on white supremacy, which is why the Republican Party is so intent on vote suppression — and why a massive get-out-the-vote strategy would virtually ensure Democratic victory. (Whether that’s what the Democratic Party establishment wants is another question.) Edsall himself actually acknowledges the turn-out-the-base option, but dismisses it with a quote from his anonymous Republican pollster: “Democrats should focus on persuasion, because Trump will take care of mobilizing his opponents.” If only it were so simple; ask Hillary Clinton about that one.

But second — and not countered by an accompanying column: The “swing electorate” that cares only about immigration and identity politics is a myth. People’s political opinions vary on a range of issues, so broad-brush labels like “liberal,” “moderate” and “conservative” are only so helpful in predicting what positions they hold or which issues are most important to them. The politics of a person who could vote in one election for Barack Obama and the next for Donald Trump obviously can’t be captured with such a label.

It’s true that Trump, more than any politician in recent U.S. history, turns out voters based on “conservative” identity politics. But he courted those same white working-class voters by bucking GOP orthodoxy with “liberal” economic positions — most notably trade protectionism, but also disingenuously attacking Wall Street and falsely promising to defend Social Security, Medicare and Medicaid. Meanwhile, the Democratic Party, which since the New Deal has been the party of labor, has long been shifting to the right on economic policy, abandoning one of its core constituencies.

Never mind that a wealth tax, proposed by both Sanders and Warren, is wildly popular among general election voters. Never mind that Medicare for All is also very popular — although recent polls (including one cited by Edsall) indicate that support may be weakening under the massive coordinated attacks on the plan from the deep-pocketed health industry and their lackeys from both parties and the corporate media (FAIR.org, 4/29/19, 10/2/19).

Edsall wants Democratic candidates to appeal to those white working-class voters, not by offering them real economic succor, but by throwing the rest of the party under the bus. Of course that’s what all the Inexplicable Republican Best Friends consulted by Edsall advise (many of whom are explicitly anti-Trump) — because doing so would essentially turn those candidates into models of the pre-Trump Republican Party.

And by “balancing” Edsall’s column with three other columns that make no mention of economics, class, wealth, poverty or inequality, the Times seems to be happily going along with the centrist smoke and mirrors.