Nikki Haley: Kelly and Tillerson tried to recruit me to undermine Trump to “save the country” 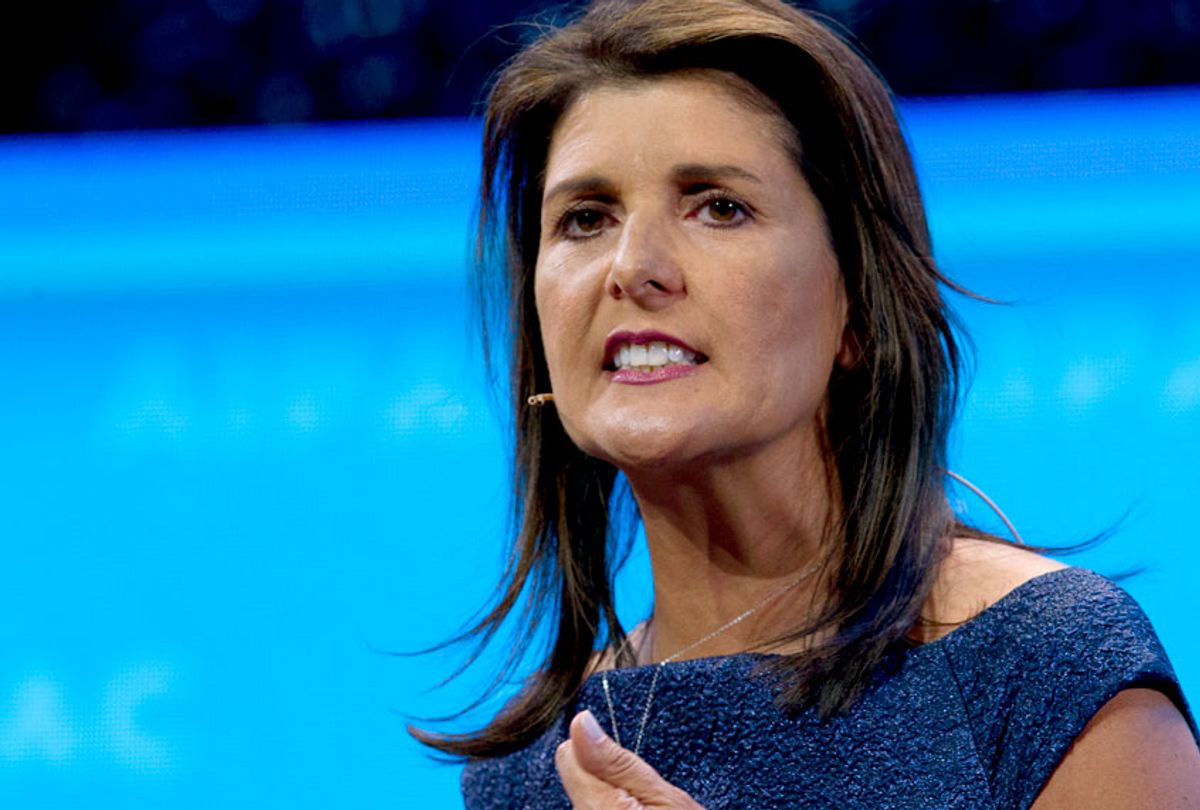 Two former top Trump advisers hatched a secret plot to undermine the president in an effort to “save the country,” according to former United Nations ambassador Nikki Haley’s new book.

Former Secretary of State Rex Tillerson and former White House chief of staff John Kelly tried to recruit Haley into an effort to subvert Trump but she refused, Haley wrote in her upcoming memoir “With All Due Respect,” according to The Washington Post.

“Kelly and Tillerson confided in me that when they resisted the president, they weren’t being insubordinate, they were trying to save the country,” Haley wrote. “It was their decisions, not the president’s, that were in the best interests of America, they said. The president didn’t know what he was doing.”

Haley wrote that Tillerson warned her that people would “die” if Trump were left unchecked. The two men argued that Trump’s decision to withhold aid to a United Nations agency that aids the Palestinians would lead to increased violence and widen rifts in the region.

“I was so shocked I didn’t say anything going home because I just couldn’t get my arms around the fact that here you have two key people in an administration undermining the president,” Haley told The Post.

Haley said in an interview with CBS News that she thought Tillerson’s assertion that people would “die” was “offensive.”

“It absolutely happened,” she said. “And instead of saying that to me, they should’ve been saying that to the President, not asking me to join them on their sidebar plan.”

Haley said that the two advisers should have quit if they didn’t support the president’s policies.

Tillerson has not commented on Haley’s claims but Kelly did not deny the substance of her allegations in a statement to CBS News.

“If by resistance and stalling she means putting a staff process in place…to ensure the [President] knew all the pros and cons of what policy decision he might be contemplating so he could make an informed decision, then guilty as charged,” he said.

Though Haley criticized Trump before his election and has offered occasional criticism since, describing Trump’s tweet telling four congresswomen of color to “go back” to the countries they came from as “not appropriate,” she has largely defended the president. The Washington Post’s Sean Sullivan suggested that Haley is widely seen as a potential 2024 presidential candidate and may be positioning herself as an ally of Trump ahead of a possible primary run.

Haley did not dissuade those predictions when she defended the president from the impeachment inquiry in her CBS interview on Sunday.

Asked if she thought Trump will be impeached, Haley replied, “No, on what?”

“You're gonna impeach a president for asking for a favor that didn't happen and giving money and it wasn't withheld? I don't know what you would impeach him on,” she said. “The death penalty for a public official. When you look at the transcript, there's nothing in that transcript that warrants the death penalty for the president."

Haley was referring to a partial transcript of Trump’s July 25 phone call to the Ukrainian president, on which he pressed the leader to investigate the Bidens while withholding military aid. A top National Security Council official who listened to the call later testified that specific references to Biden were “omitted” from the partial transcript. Multiple Trump administration officials have testified that the president tried to extort Ukraine into launching a Biden investigation and a separate Clinton probe in exchange for the military aid, which Congress had already allocated.

"The Ukrainians never did the investigation. And the president released the funds. I mean, when you look at those, there's just nothing impeachable there,” Haley told CBS. “The American people should decide this. Why do we have a bunch of people in Congress making that decision?"

MSNBC host Joe Scarborough suggested that Haley’s book and press tour were aimed at “an audience of one,” the president.

“Nikki Haley is not dumb. In fact, we know her, she’s quite intelligent. But she certainly is playing a game here,” Scarborough said Monday. “She’s putting herself in position to be Mike Pence’s replacement, if the president decides he needs to replace Mike Pence, and this was an audition… That’s exactly what this book is all about.”

Haley has long been rumored as a possible replacement for Pence on the 2020 ticket. If Haley’s goal was to reach Trump, it appears to have worked. The president praised the book on Twitter Sunday night.

But beyond trying to ingratiate herself with the president, Haley is also betting that the Republican Party will remain solidly pro-Trump well after he leaves office.

“Haley, the bright hope of Trump-skeptical Republicans, has placed a big bet that the Republican future will be almost as Trump-y as the recent Republican past,” former George W. Bush speechwriter David Frum wrote at The Atlantic. “Tillerson and Kelly tried to raise the alarm, but they are not running for office. Haley is, and she first rejected them and then outed them. In terms of amoral calculation, the odds seem with her… We’ll all soon see how far that half-heartedness will elevate her.”