Supreme Court appears poised to side with Trump and end DACA

All eyes are on Chief Justice John Roberts as the court weighs the fate of nearly 700,000 young immigrants 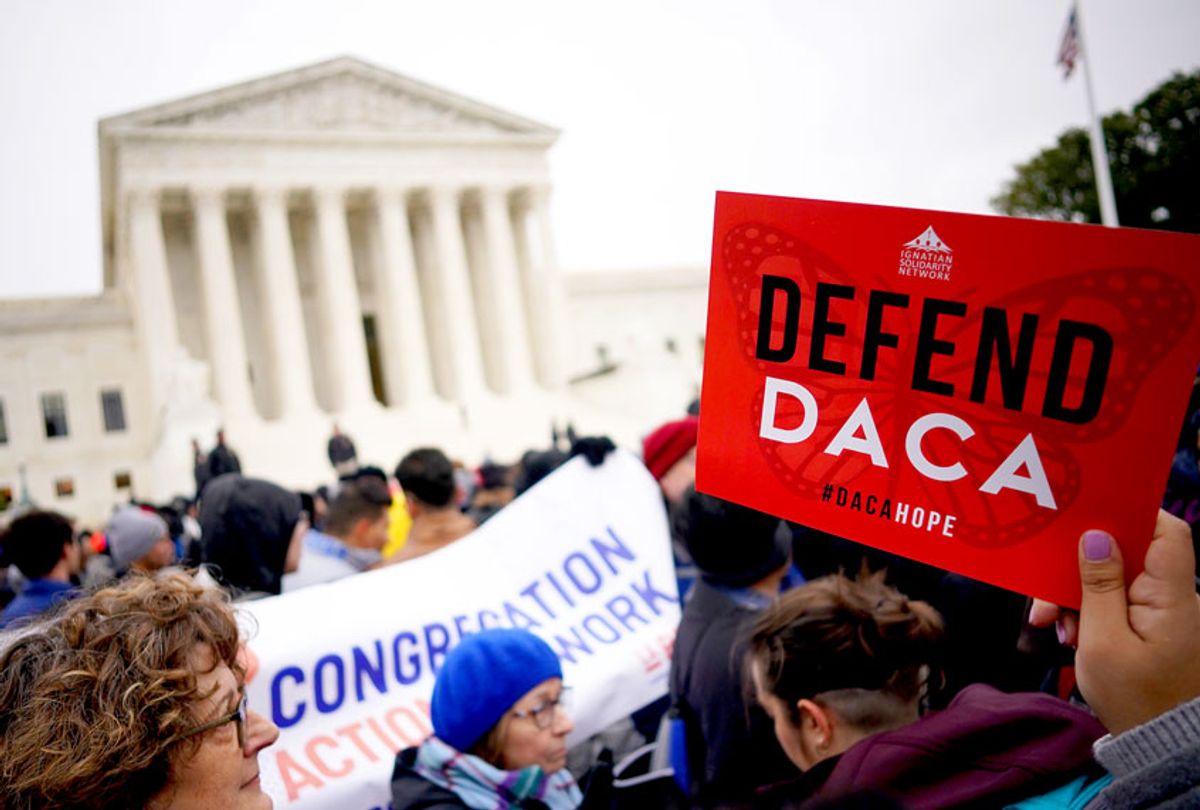 Immigration rights activists take part in a rally in front of the US Supreme Court in Washington, DC on November 12, 2019. - The US Supreme Court hears arguments on November 12, 2019 on the fate of the "Dreamers," an estimated 700,000 people brought to the country illegally as children but allowed to stay and work under a program created by former president Barack Obama. (MANDEL NGAN/AFP via Getty Images)
--

The Supreme Court on Tuesday appeared likely to side with the Trump administration in its effort to end the program that protects from deportation young undocumented immigrants brought to the United States as children.

"We own this," Solicitor General Noel Francisco reportedly told the justices over the Deferred Action for Childhood Arrivals (DACA) program, put in place by President Barack Obama by executive action in 2012.

Nearly 700,000 people are enrolled in the program, which provides work permits and protection from deportation to qualified young immigrants, known informally as "Dreamers," who were unlawfully brought to the U.S. as children.

Justices Clarence Thomas, Samuel Alito, Neil Gorsuch and Brett Kavanaugh appeared likely to agree that the Department of Homeland Security had acted properly when it ended DACA in 2017, while Chief Justice John Roberts did not seem to be as strongly convinced, NBC News reported.

Roberts may be the deciding vote, just as he was last term when the court blocked the administration from adding a citizenship question to the 2020 U.S. Census. He concluded in that case that the government did not provide an appropriate explanation for adding such a question.

Lower court rulings have argued that President Donald Trump's reasoning for ending the program in 2017 didn't hold up; the administration at the time simply pointed to a one-page letter from then-Attorney General Jeff Sessions stating the program was illegal and unconstitutional, but did not explain the thinking behind its decision.

Arguing on behalf of a coalition of businesses, civil rights groups, universities and individuals, lawyer Ted Olson said federal law requires the government to provide a detailed explanation before making policy decisions that affect hundreds of thousands of individuals and entities.

Olson, a former solicitor general under President George W. Bush, noted that DACA differs from other programs because the government "invited them into the program."

It would be one thing, he said, "if they provided a rational explanation and took responsibility for their decision," NBC News reported. But instead, the Justice Department has simply declared the program was illegal and therefore must be shut down.

"We don't know what the administration would do if it had to own its decision and take responsibility for throwing these young people out of work," Olsen reportedly said.

The court's four liberal justices seemed to agree. When the government attempted to end the program, "they said it was illegal and said nothing about the policy," Justice Ruth Bader Ginsburg reportedly said.

Justice Sonia Sotomayor said the government had more of a responsibility to say why it was ending the program.

"This is about a choice to destroy lives," she said. But the court's conservatives suggested that the Trump administration's decision to stop enforcing DACA is beyond the power of the courts to review.

In the meantime, lower courts have kept DACA alive, allowing young people in the program to reapply every two years to remain under its protection. Children of undocumented immigrants can remain in the U.S. if they entered the country before their 16th birthday and if they arrived by 2007.

Figures show that over 90% of DACA recipients are employed or in school. Many don't speak the language or know the culture of their home countries.

Trump's decision to rescind DACA has been opposed by more than 100 businesses and trade groups, including the U.S. Chamber of Commerce. Microsoft is one of the program's defenders whose lawsuits led to court orders that kept the program going.

Microsoft has said that it employs more than 60 DACA recipients.

"These young people contribute to our company and serve our customers. They help create our products, secure our services and manage our finances," the company said.

Apple CEO Tim Cook and senior vice president Deirdre O'Brien filed a separate "friend of the court" brief in support of the program. The tech giant said it employs 443 Dreamers in 36 states, coming from 25 countries.

"Our interest in this case is simple: We are distressed at the prospect of ripping our DACA colleagues from the fabric of our company," Cook and O'Brien wrote in their brief, which was filed on behalf of Apple. "This issue is a moral one: Our country made a deal with a highly vulnerable population interested in a bright future, and we should keep that deal."

Ahead of Tuesday's Supreme Court argument, Trump rejected the sympathetic narrative of the young immigrants at the center of the case.

"Many of the people in DACA, no longer very young, are far from 'angels.' Some are very tough, hardened criminals," he wrote. (In fact, DACA recipients by definition can't be criminals — they must "not have been convicted of a felony, significant misdemeanor or three or more other misdemeanors" in order to renew their immigration status, according to U.S. Citizenship and Immigration Services.)

Though he likened DACA recipients to "criminals," Trump noted that, should the Supreme Court allow his administration end the program, Democrats and Republicans in Congress would have to put their differences aside and strike a deal to allow the immigrants to stay legally in the U.S.

A decision in today's contentious case is not likely until the end of the Supreme Court's term in June, meaning the divisive debate over the program will be inserted into the height of the presidential campaign season.