Grifters gonna Trump: Mina Chang lied about her Harvard MBA and her nonprofit work — and even faked a Time cover 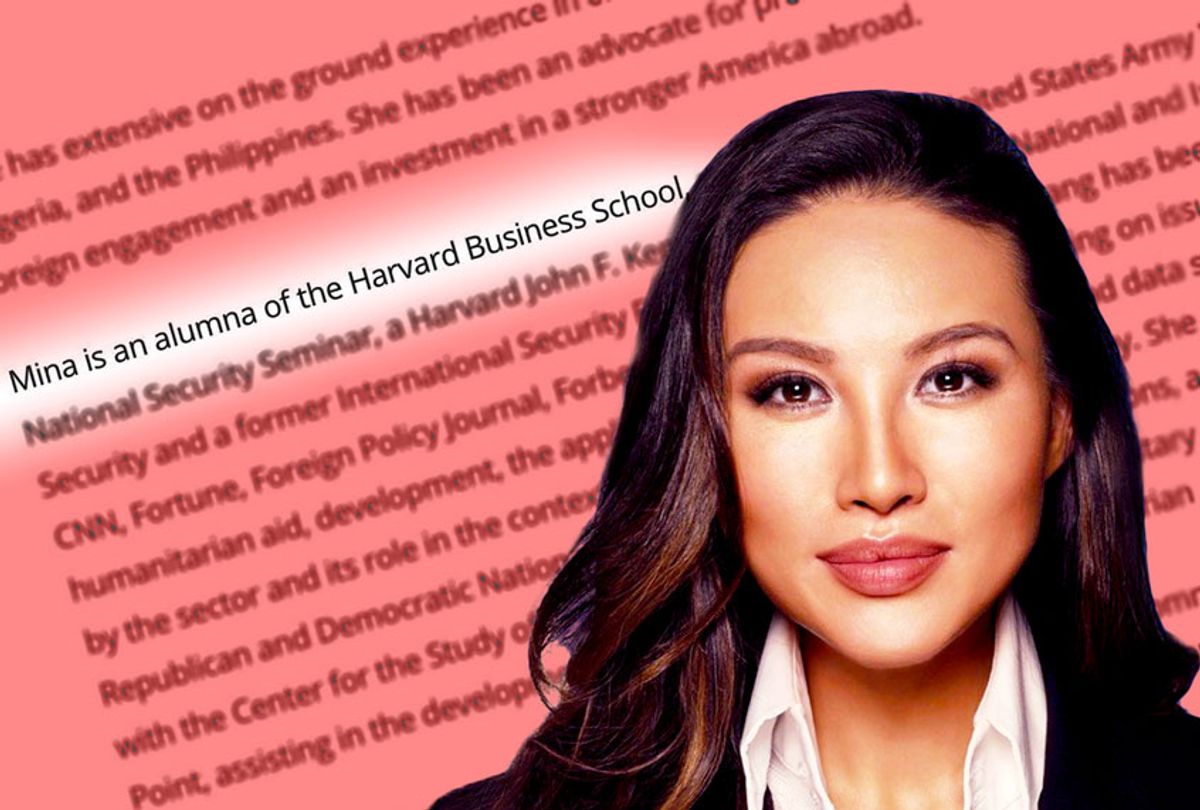 A senior Trump administration official was under consideration for a promotion — and then the Senate started digging into dubious entries on her résumé, NBC News reports.

An NBC investigation discovered that Mina Chang, the State Department’s deputy assistant secretary for the Bureau of Conflict and Stability Operations, repeatedly lied on her résumé and even created a fake Time magazine cover with her face on it that she brought to interviews.

Chang falsely claimed she was a Harvard Business School graduate and greatly inflated her nonprofit and speaking experience, according to the report. Chang, who got the State Department job in April, made up a position on a United Nations panel, claimed that she had spoken at both the Democratic and Republican national conventions, and implied that she had testified to Congress.

Chang also exaggerated a job she actually did hold. She is the former CEO of the nonprofit Linking the World, and claimed that her charity was building schools and “impacting” thousands of people in dozens of countries around the world. NBC found that the organization’s tax filings showed no evidence of a vast worldwide network. Instead, it showed a budget of less than $300,000 and a “handful of staff,” according to the report. The charity lost its tax-exempt status earlier this year after failing to submit its filings to the IRS for three consecutive years.

A 2017 video on the Linking the World website shows an interview in which Chang discussed appearing on the cover of Time magazine, which she has not.

"Here you are on Time magazine, congratulations!” the interviewer declares after showing a Time cover bearing Chang’s face. “Tell me about this cover and how it came to be?"

The interviewer told NBC News that Chang brought the Time cover to the interview.

The fake Time magazine cover is a classic Trump move, as it happens. The Washington Post reported in 2017 that a framed copy of a fake Time magazine cover hangs in at least five of President Trump’s golf clubs. “Donald Trump: The ‘Apprentice’ is a television smash!” the fake cover says, with another headline adding, “TRUMP IS HITTING ON ALL FRONTS ... EVEN TV!”

The extent of Chang’s falsehoods appears to be immense. She has claimed to be an “alumna” of Harvard Business School, although she actually only attended a seven-week course there in 2016. Her State Department bio also lists her as a “graduate” of the Army War College, even though she only attended a four-day seminar there. Her LinkedIn account, on the other hand, says she attended the University of the Nations, an unaccredited Christian school staffed by volunteer instructors.

The highly dubious résumé apparently passed the smell test as the Trump administration, which appointed her to oversee efforts to prevent conflicts in politically unstable areas. Chang earns a six-figure salary and works at an agency with a $6 billion budget. A deputy assistant secretary typically has top-secret security clearance, but NBC reported that it was unclear if Chang had such clearance.

Chang was appointed to the position on an interim basis while the administration intended to promote her to oversee the U.S. Agency for International Development's (USAID) work in Asia, where she would have operated a budget of more than $1 billion per year. The administration announced her nomination in 2018, but it was withdrawn without explanation earlier this year after the Senate Foreign Relations Committee began digging into her nonprofit organization and her experience.

Chang appears to have landed in the position thanks to her connection to Brian Bulatao, a State Department official and longtime friend of Secretary of State Mike Pompeo. Bulatao attended one of Chang’s fundraisers and donated $5,500 to her nonprofit, NBC reported.

The report raised questions about the failings of the Trump administration to vet appointees.

"It does seem that this administration has not been doing the same depth of vetting as previous administrations," James Pfiffner, a former official at the Office of Personnel Management, told NBC.

Taylor Weyeneth, a 24-year-old Trump campaign volunteer, was fired last year after the Washington Post reported he was appointed to a top job at the White House drug policy office despite a lack of any relevant experience.

Earlier this year, Trump nominated Rep. John Ratcliffe, R-Texas, to replace Dan Coats as director of national intelligence, but withdrew the nomination a few days later amid mounting suggestions that Ratcliffe had exaggerated his experience in legal and intelligence matters. Trump's former acting attorney general, Matt Whitaker, stepped down shortly after it was revealed he had lied on his résumé about his college football career.

"The White House goes into very great detail — 'Have you ever been divorced, have you ever been arrested?' Most administrations are very thorough about that,” Pfiffner told NBC. "I would expect that they would check all of the claims made in the bio, most of which would be relatively easy to check."

Pfiffner added that the turmoil within the administration has not helped the situation.

"With the way Trump has fired high-level people by tweet, it's not an encouraging thing to work for the government. But if you are not very qualified then it's a great chance to get in there,” he said.

Trump insisted after Ratcliffe’s failed nomination that the “vetting process for the White House is very good.”

Menendez, the ranking member of the Senate Foreign Relations Committee, told NBC that committee staff "has been forced to dedicate a significant amount of time and resources on vetting this administration's nominees because of the White House's negligence or incompetence.”

"These jobs aren't a joke,” he added. “There are billions of U.S. taxpayer dollars and the lives of U.S. citizens on the line here."