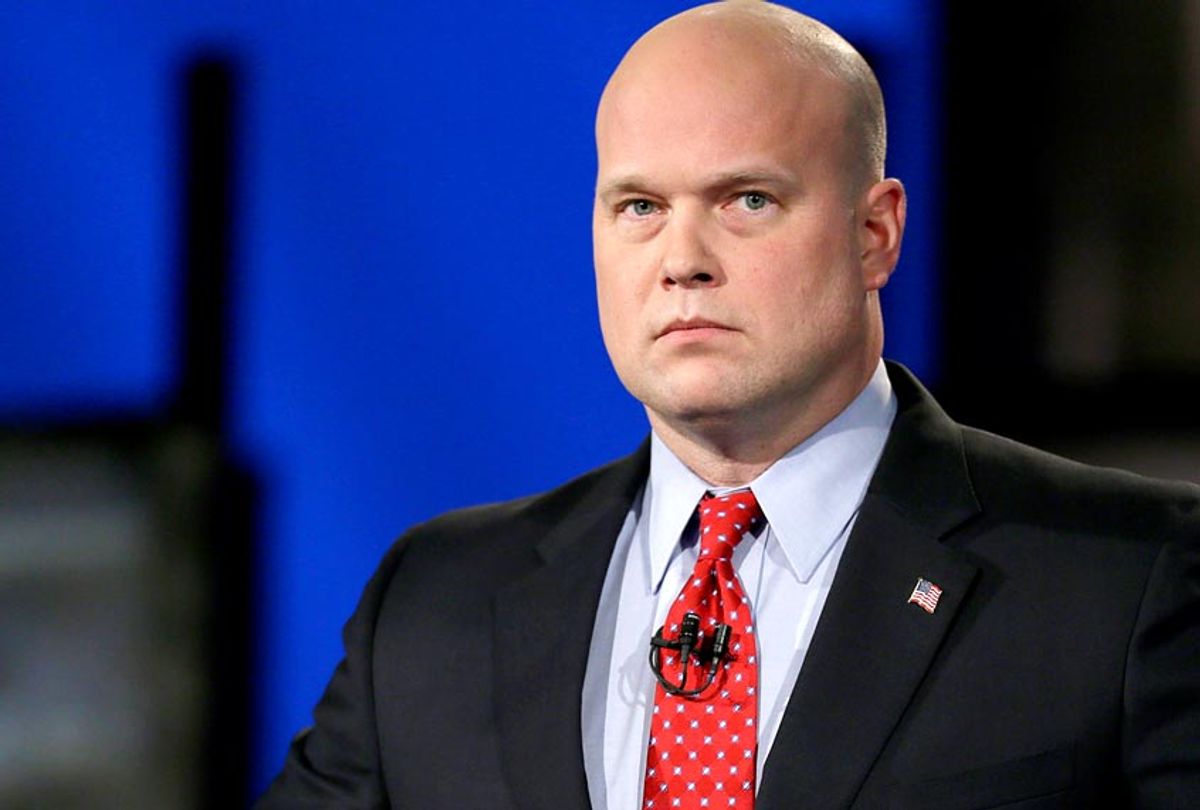 Matthew Whitaker, the acting attorney general, falsely claimed on his resume and on government documents that he was named an Academic All-American while he played football at the University of Iowa, the Wall Street Journal reported Wednesday.

Whitaker, whom President Donald Trump named acting attorney general last month, claimed to have been an Academic All-American in his biography on his former law firm's website, as well as on a resume he sent in 2014 to a now-closed patent-marketing firm for which he sat on the advisory board, according to the newspaper. The Journal reported that the resume was also included in documents released last month by the Federal Trade Commission released and that the claim was included in a 2009 press release from the Department of Justice. Whitaker also made the claim when he applied to be a judge in Iowa in 2010, according to the newspaper.

A spokeswoman for the College Sports Information Directors of America told the Journal that the organization doesn't have a record of Whitaker as an Academic All-American. The spokeswoman, Barb Kowal, said Whitaker appeared to have been awarded a lower-level honor, an All-District honor. In addition, Whitaker's name does not appear on the list of past Academic All-Americans on the organization's website.

Student athletes must have at least a 3.3 cumulative grade point average and be a starter or an important reserve on his or her team to be considered for Academic All-American status. Whitaker was a tight end for the University of Iowa's football team from 1990 to 1992.

Kowal told the newspaper that Whitaker was actually a "1992 GTE District VII Academic All-District selection." She added that the organization was less formally organized in the 1990s and that "people over time use terms interchangeably and innocently.”

Justice Department spokeswoman Kerri Kupec told the Journal that Whitaker relied on a 1993 University of Iowa football media guide that named him as a "GTE District VII academic All-American" when he listed the honor on his resume.

This is the latest scandal surrounding Whitaker since he was named the nation's top law enforcement official after former Attorney General Jeff Sessions was forced out of the Justice Department by Trump. Whitaker's appointment came just one day after the midterm elections, in which Democrats seized control of the House of Representatives and Republicans expanded their slim majority in the Senate, which will ease the path for Trump to confirm a successor.

In particular, questions of the legality of his appointment have weighed Whitaker down since he was named to the post. Since his appointment, Democrats and conservative legal scholars — including George Conway, the husband of presidential adviser Kellyanne Conway — have argued that Trump may have circumvented the Constitution in naming Whitaker to the post because he was not confirmed by the Senate. Other critics have expressed concern that Trump's decision to place Whitaker in the interim role instead of Deputy Attorney General Rod Rosenstein may be a sign that the president is attempting to assume control of special counsel Mueller's investigation.

Trump responded to the criticism by arguing that Whitaker was "confirmed at the highest level" in 2004 when he was a federal prosecutor in Iowa and by questioning why special counsel Robert Mueller, who is leading the federal investigation into allegations of collusion between the president's 2016 campaign and the Russian government, was not also confirmed by Congress' upper chamber.

Trump has denied taking Whitaker's pulse on the Mueller investigation, but he did not have to do so. Throughout his time as Sessions' chief of staff, Whitaker has railed against the ongoing investigation, penning an op-ed titled "Mueller's investigation of Trump is going too far." Democrats in the House and Senate have already called on Whitaker to recuse himself from the probe — something Sessions had done, but which Trump viewed as betrayal. Whitaker is a Trump loyalist — and the president has made it clear that he favors loyalty over nearly all else.

Trump announced his intention to nominate William Barr as attorney general on a permanent basis earlier this month. Barr, who supported Trump during his presidential campaign, previously served as attorney general under late President George H.W. Bush, a Republican, from 1991 to 1993. If confirmed, Barr would succeed Whitaker as the nation's top law enforcement official, though it was recently revealed that he criticized Mueller's investigation in an "unsolicited memo" to the Justice Department earlier this year, which has raised concerns among some lawmakers. Barr also told The Hill last year that "leaks" from the special counsel's office "raise questions as to whether there is an agenda" and suggested that Mueller's team was not politically "balanced," because some members had made political contributions to Democratic candidates. Notably, Mueller, who is leading the probe, is a member of the Republican Party.