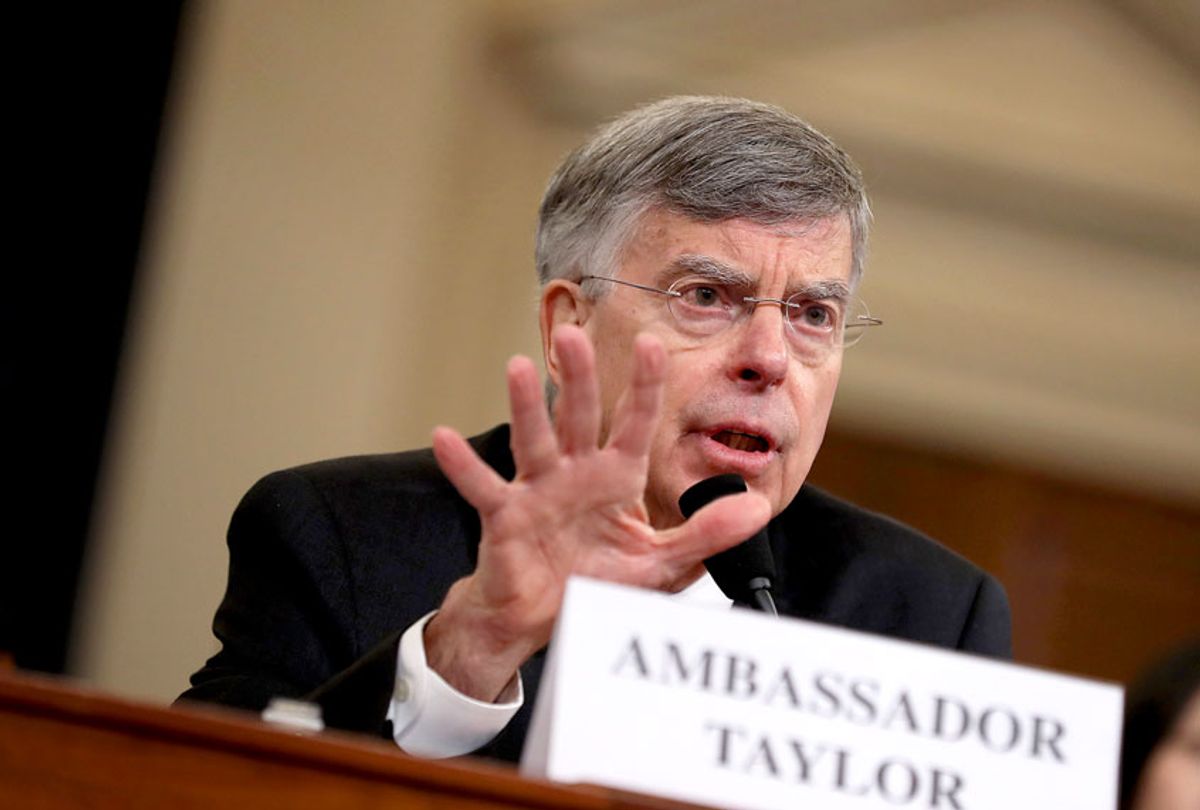 Top U.S. diplomat to Ukraine, William B. Taylor Jr. testifies before the House Intelligence Committee in the Longworth House Office Building on Capitol Hill November 13, 2019 in Washington, DC. In the first public impeachment hearings in more than two decades, House Democrats are making a case that President Donald Trump committed extortion, bribery or coercion by trying to enlist Ukraine to investigate political rivals in exchange for military aid and a White House meeting that Ukraine President Volodymyr Zelensky sought with Trump. (Photo by (Chip Somodevilla/Getty Images)
--

Taylor, who provided “damning” testimony at his closed-door deposition in October, discussed a previously unreported phone call between Trump and Gordon Sondland, the U.S. ambassador to the European Union. Taylor said on Wednesday that he had not been aware of this phone call at the time of his earlier deposition.

Taylor said he had recently learned that one of his aides overheard a phone call between Trump and Sondland a day after Trump’s July 25 phone call with Ukrainian President Volodymyr Zelensky, when Trump pressed Zelensky for an investigation into Joe and Hunter Biden and a nonexistent Democratic server.

Taylor testified that his aide was at a meeting with Sondland and Andrey Yermak, an aide to Zelensky, on July 26 when Sondland called Trump. The aide told Taylor that the president asked Sondland about the status of “the investigations.”

Taylor said that he understood the “investigations” to refer to Trump’s demand that Ukraine investigate the DNC server and the Bidens.

Taylor said that he had not heard the aide’s account before and was “including it here for completeness.”

Taylor said that his aide asked Sondland what Trump thought about Ukraine. Sondland replied that Trump “cares more about the investigations of Biden, which [Rudy] Giuliani was pressing for,” Taylor testified.

“I take it the import of that is he cares more about that than he does about Ukraine?” asked House Intelligence Committee Chairman Adam Schiff, D-Calif.

"In mid-August, it became clear to me that Giuliani's efforts to gin up politically-motivated investigations were now infecting U.S.. engagement with Ukraine, leveraging President Zelensky's desire for a White House meeting,"

During Taylor and Kent’s testimony, House Democrats scheduled a new closed-door deposition for next week. On Friday, House investigators will interview David Holmes, the Taylor aide who overheard Sondland’s phone call with Trump.