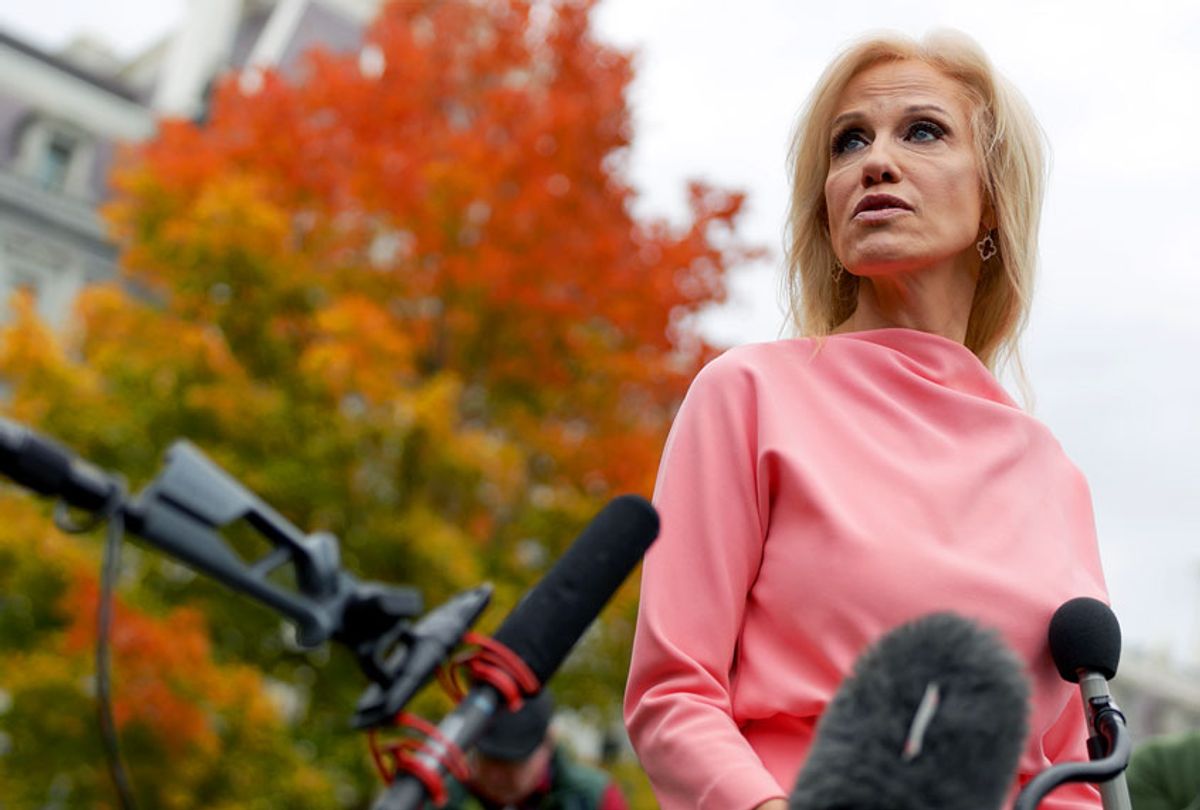 White House senior counselor Kellyanne Conway speaks to members of the media outside the West Wing of the White House. (Alex Wong/Getty Images)
--

White House counselor Kellyanne Conway tussled with CNN's Wolf Blitzer during a live interview Thursday morning as the network host tried to get her reaction to a clip of her husband denigrating President Donald Trump amid impeachment proceedings.

Conway, one of the most aggressive defenders of the president and his agenda in the media, appeared on CNN to discuss the opening of the public impeachment hearings on Wednesday.

The tense on-air exchange devolved as the two began interrupting and speaking over each other. The conversation hit an apex when Blitzer brought up Conway's husband, George Conway, a prominent conservative lawyer who has emerged as one of the president's most outspoken critics.

"I just have a final question, a sensitive question, and it's a political question, it's a substantive question. I don't want to talk about your marriage," Blitzer noted, prompting a laugh from Conway. "I know that there are issues there. Your husband, George Conway —"

"Why would you say that?" Conway scoffed.

"I don't want to talk about your marriage. I want to talk about a substantive point that your husband, George Conway, made," Blitzer continued, noting how the Trump critic was married to one of the president's most loyal defenders.

"And the relevance is — and come on," she laughed. "Wait for it. Drum roll. And he's married to me?"

"Well, you know, he happens to be married to you. What's wrong with that?" Blitzer replied.

"He happens to be married to you?" she scoffed. "That's bizarre."

George and Kellyanne Conway’s conflicting views on the president have attracted significant and widespread media coverage. George, who supported Trump in the 2016 election and who the president once considered nominating to be solicitor general, most recently appeared as panel guest on MSNBC on Wednesday as the impeachment hearings got underway.

"I'm horrified. I'm appalled. . . . I don't think I could have imagined a president, any president, engaging in this sort of conduct," he said on MSNBC.

Over the past year, George Conway has steadily increased his criticisms of the president, eventually revealing that he no longer feels comfortable identifying as a Republican.

"There is cancer in the presidency," George wrote in April. In June, he called Trump "racist," as well as "boorish, dim-witted, inarticulate, incoherent, narcissistic and insensitive." He once said he "wishes he had never introduced his wife to Trump in the first place," and noted that he spends so much time tweeting about his wife's boss "so I don't end up screaming at her about it."

Last week, George Conway penned a lengthy essay in The Atlantic, in which he raised questions about the president's mental state by drawing on the articles of the Constitution into the Diagnostic and Statistical Manual of Mental Disorders. The article's scathing contents can be summarized with its title: "Unfit for Office."

Trump, for his part, has described George Conway as a "stone cold loser," "a whack job" and a "husband from hell." The president also claimed that he was “just trying to get publicity from himself."

Kellyanne Conway has once spoken out about her husband's habit of writing and bashing her boss, calling his public anti-Trump rants against the commander-in-chief both "disrespectful" and a "violation of basic decency." She has even suggested thather husband’s tweets against Trump could have possibly violated their "marital vows."

George Conway, meanwhile, has hinted that he is ready for his wife to leave her post at 1600 Pennsylvania Avenue.

"If my wife were the counselor to the CEO of Pepsi, and I had a problem with her boss, I would simply drink my Coke and keep my mouth shut," he said. "If the president were simply mediocre or even bad, I'd have nothing to say. This is much different . . . If there's an issue, it's because she's in that job for that man."