As Amazon's Nazi-triumphant alternate history ends, we don't need a reminder of how far gone America could be 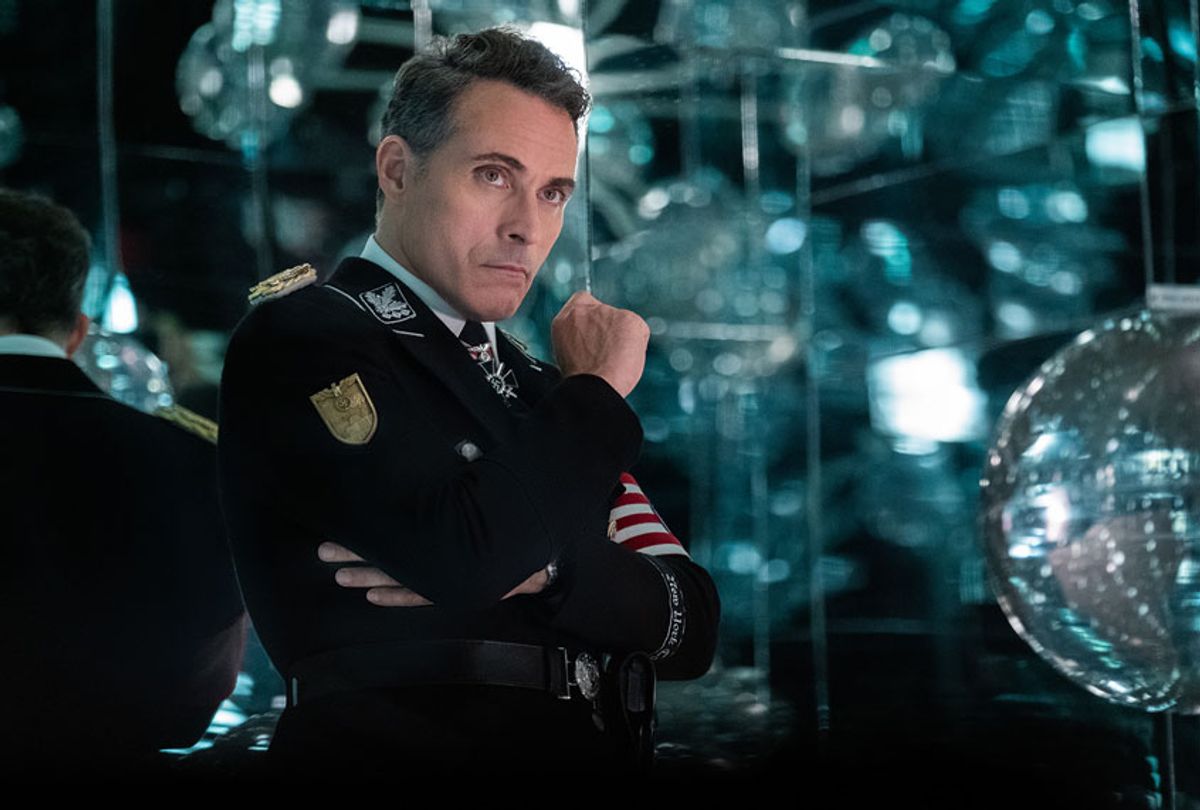 A show within Amazon’s “The Man in the High Castle” resembles “The Twilight Zone,” a speculative tale that appears to take place in a timeline closer to the one we know. It could even be our own. In the scene shown, a contented office working merrily hums along in his duties as the Rod Serling-style narrator speaks in ominous tones about the comfortable way that the world works: If he works hard at his job, the disembodied voice says, he will be rewarded.

Sure enough, he’s called into his boss’ office . . . only to be met by a black man. This sight more than shocks him – he’s horrified. But his nightmare doesn’t end there, because in walks his replacement – a younger man, also black. Cue the trumpeting thriller music.

Shows within shows can be clever spoofs, or they may operate as deft winks acknowledging some broader point that can’t cannot be adequately finessed within the main narrative. This small narrative aside does a bit of both.

The “Twilight Zone” doppelganger is part of the American Reich’s effort to discredit the rebellion-sparking films created by Hawthorne Abendsen, the titular Man in the High Castle (Stephen Root). At the same time, it references a familiar dog-whistle in our own America: They are coming to take your job. They are going to displace you. They will not replace us.

The fourth and final season of “The Man in the High Castle” arrives at a time when Philip K. Dick’s grim alternate history, in which the Nazis won World War II and American fell to fascist rule, feels far too close than one might have imagined when the series first premiered.

To remind you of our state of mind in that long ago time I’m obligated to quote the previous TV critic at Salon, who makes the following observation in her Season 1 review:

"The Man in the High Castle” comes to us at a very strange time in American politics. The same nation that would lead the world on tolerance, action against climate change, and economic sustainability is also digging its heels in, fueled by a hatred and paranoia that is frightening when confronted in all of its glory.

That first season premiered in November 2015 – five months after reality TV host and birther conspiracist Donald Trump declared his candidacy and at a time when a number of Americans could not conceive of a world in which such an ignorant buffoon could be elected president.

As of this week we know that at that time in 2015, White House senior policy adviser Stephen Miller, who brought us the Muslim travel ban and our draconian policy toward migrants detained at our southern border, was already hard at work constructing the racist architecture that drives current immigration policy under the Trump administration.

But as far as most people knew in 2015 and 2016, “The Man in the High Castle,” though a sobering statement about how thin the line is between what we call freedom and a world ruled by lethal hatred and oppression, was too far-fetched to fully come to pass.

Here we are in 2019, and in the very same week that the Amazon drama’s endgame drops, emails providing hard evidence of Miller’s s dangerous strain of white nationalism have been exposed to the public by way of the Southern Poverty Law Center.

The SPLC released these articles to provide concrete evidence – not merely speculation – of Miller’s alignment with far-right racist extremism. It obtained and reviewed more than 900 emails Miller sent to Breitbart editors between March 4, 2015 and June 27, 2016, provided to them by one of the right-wing media outlet’s former editors Katie McHugh, with whom Miller corresponded while he served as an aide to Jeff Sessions.

In these emails he links to articles on neo-Nazi websites, recommends racist literature and forwards conspiracy theories that cast non-whites and immigrants as violent criminals, and much worse. Yet where are the furious calls from members of President Trump’s party, the Republicans, to fire him? There aren’t any.

Meanwhile Sessions, whom Trump fired from his administration’s position as Attorney General, has announced his intention to run for Senate.

Trump bulldozed 2015’s touted leadership on “action against climate change,” recently notifying the United Nations that the United States is beginning the process of withdrawing from the Paris Agreement, which committed the US and 187 other countries to act in preventing global temperatures from rising. Economic sustainability? Our federal budget deficit has increased by 68 percent since he took office, the highest it’s been in seven years.

And the current must-watch TV – for some people, anyway – is the public testimony portion of the impeachment inquiry current underway in Congress and airing on multiple TV networks.

He then launches into a vicious attack of the Democrats and, “their Russia hoax,” lashing out against committee chairman and fellow California representative Adam Schiff. But he leaves his lowest blow for last. By way of bitterly greeting William Taylor, acting U.S. Ambassador to Ukraine, and Deputy Assistant Secretary of State George Kent, the committee’s first witnesses, Nunes mumbles this terrible piece of TV dialogue.

“I’d like to welcome you here, and congratulate you for passing the Democrats’ Star Chamber auditions held for the last six weeks in the basement of the Capitol. It seems you agreed, wittingly or unwittingly, to participate in a drama. But the main performance — the Russia hoax — has ended, and you’ve been cast in the low-rent Ukrainian sequel.”

The American Reich depicted in “The Man in the High Castle” understands the power of disinformation and historical rewrite. Those very ideas have made tyrannical Aryan rule a fait accompli, and Aryan children willing participants in reporting their parents and limiting their own capacity for critical thought. In one scene a child chastises a teacher for featuring William Shakespeare’s “The Merchant of Venice” and its famous speech by its Jewish character Shylock that includes the sentence, “If you prick us, do we not bleed?” because it suggests that Jewish people are human.

Back in our reality, around 13.8 million viewers tuned in to watch the impeachment proceedings across cable news channels, broadcast networks and PBS.

But millions more tuned out, declaring it “too boring.” Either that, or they simply won’t believe testimony provided by multiple credible witnesses linking Trump to a campaign to pressure the Ukraine to dig up political dirt on one of his top rivals in the 2020 presidential race, former Vice President Joe Biden. And there are those despondent souls who don’t show up in the polls or on social media who aren’t watching because they’d rather not add to the hopelessness they’re feeling.

Those viewers won’t be excited to watch this final stretch of road in “The Man In the High Castle,” even if it does make for a chilling companion piece to the ongoing political concerns of our time.

Honestly, as I have previously written, I get it. Watching Amazon’s alt-reality fascist America would be a demoralizing experience even if our timeline more closely mirrored the illusory progress of 2015. Completists, and devoted fans of the series will naturally dive in and see it through to the very end which, one hopes, will be optimistic.

And there are hints of such a turn in the episodes provided for review, in which Rufus Sewell’s Reichsmarshall John Smith sees a vision of a different America, the one where the Allies won and there is peace and prosperity – for white people, anyway – and the Aryan youth son who sacrifices himself in his rotten world is alive, healthy, and thriving.

Then again, he can envision that possibility because the Nazis have figured out how to jump into alternate timelines where they lost, and are concocting plans to invade with the hope of spreading fascism in every possible existence. Hooray!

The central theory (really, it’s a dream) in “The Man in the High Castle“ revolves around the power of visualizing better worlds. Some characters can meditate themselves into these different timelines and planes, such as Juliana Crain (Alexa Davalos), who emerges in the series as its savior figure by circulating Hawthorne Abendsen’s reels depicting the timeline where America won and its heroes, including Franklin D. Roosevelt, are alive. Juliana is a fugitive, but her insistence on spreading that hope at any cost is the main plot engine.

One cannot simply jump in to “The Man in the High Castle” at this point in the story though, because not only is it a highly serialized drama, it also attempts to balance multiple concurrent plots, doing so with varying degrees of clarity and success. Juliana’s story intertwines with that of other resistance members. The Reich government intrigue heightens this season and exacerbates Smith’s family drama. Flashpoints and internecine fighting creates instability within the government that controls the Japanese West Coast, which finds itself at odd with the desires of its imperial ruler.

Oh, and the final season includes a closer look at the Black Communist Rebellion, a militant group patterned after the Black Panther Party that for whatever reason hasn’t been included in the main action until right before this four-season series is coming to an end. Non-Asian characters of color have barely been featured until now, save for Rick Worthy’s diner owner and Resistance member Lem Washington.

So while on the one hand I commend showrunner Eric Overmyer and the producers for acknowledging the role African Americans play in every freedom fight this nation has been embroiled in – even ones in fictional, “what if” histories – thanks but no thanks.

“The Man in the High Castle” has enough issues with adequate character development and organizing its plot threads as it is – not to mention its habit of offing characters by death squad and decapitation, among other lurid methods. That’s part of depicting a violent fascist and genocidal regime; then again, people of color in the real world are getting plenty of reminders that their bodies are targets all day long, and from the highest political office in the land.

There may come a day down the road when we’re at ease enough to re-evaluate “The Man in the High Castle” from a more even-keeled emotional space, when we’re not gritting our teeth at every moment and we can appreciate complicated dark dramas again. But today in November 2019 is not that day.

"The Man in the High Castle" Season 4 is currently available to stream on Amazon.