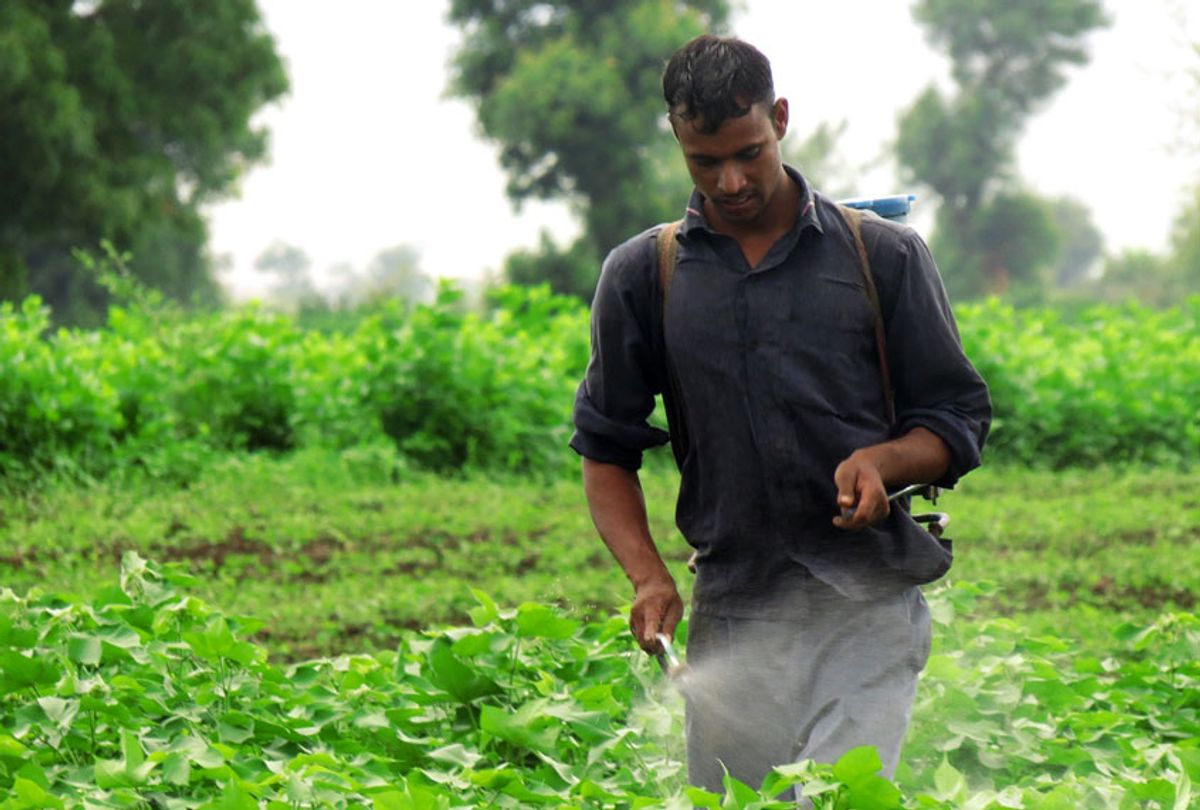 A version of this article originally appeared in Forage!, the blog of the Society of Ethnobiology.

A seed is a choice that cannot be taken back. As seeds grow, farmers care for them, making choices that they hope might lead to yields, profits, and a good life. In Telangana, India, the seemingly simple decision about which seed to plant has taken center stage in a larger debate over two mutually exclusive visions for the future of agriculture: genetically modified organisms (GMOs) or certified organic farming. Here, the slow dangers of pesticides, the hopes and dreams of hundreds of millions of growers, the fate of traditional knowledge, and even the complex threat of suicide all begin with a seed.

A few years ago, a Telangana cotton farmer named Shiva travelled with me to the city to buy name-brand cottonseeds from a shop with a reputation for selling high-quality agricultural inputs, including seeds and pesticides. The seeds Shiva sowed in June brought forth a terrific harvest that year, withstanding pest attacks, and redoubling investments in pesticide sprays, fertilizers, labor, and plowing. Ripe bolls, having withstood the vagaries of an increasingly unpredictable monsoon and new insect pest cycles, bring the promise of fireworks, new clothes, presents, and parties when sold in time for the late autumn festivities. Farmers like Shiva can breathe sighs of relief, content that, this year, their gambles have paid off.

Farmwork does not always proceed so smoothly. That same year, Shiva’s neighbor Dharwesh found his cotton stems and the undersides of his leaves covered in whiteflies, immune to genetically modified cotton’s genetically modified (GM) pesticidal genes. Panicking, Dharwesh borrowed a motorized pesticide sprayer to treat his fields. A few rows into his field, Dharwesh’s machine overloaded, engulfing him in a cloud of smoke and insecticide. He collapsed, awakened minutes later by a neighbor who rushed him to a nearby clinic. Dharwesh recovered, but some of the insecticide was lodged in his left eye for too long. He is now blind in that eye, a fate better, he explains, than it might have been.

Their neighbor, Bhadra, across the road was even less lucky. A cotton farmer who has had several unlucky seasons, lost money to laborers, and borrowed to afford fertilizers and pesticides, grows increasingly anxious. As a young man, Bhadra’s marriage prospects — and thus his standing among his peers and his place in the village — were in jeopardy with every insect attack and lost rupee. He heard a rumor that the woman to whom he was arranged to be married was now pursuing other husbands. Overwhelmed, he drank several gulps of the concentrated insecticide that is present in every Telangana cotton farmer’s home. Bhadra vomited twice, and died later that day, joining 11,771 farmers who committed suicide in that year.

200 kilometers southwest, Mahesh does not decide between different cottonseed brands at a shop. Because his village has decided to sell organic cotton, he is legally prohibited from planting GM seeds. Instead, he receives them at a discount from an NGO that helps the farmers in his village comply with organic standards and then sells their cotton to interested buyers in Europe, Japan, and North America. Mahesh has reaped lower overall yields than the farmers around him, but he has found greater stability in this uncertain market and a new celebrity as a leader in a village that is bucking the trend of an agrarian crisis defined by suicide, stagnant yields, and pesticide overuse.

Farmers, lucky and unlucky, bring this cotton to shelves around the world. Much of my research since 2012 has asked how GM seeds and organic certification might help resource-poor farmers. As an anthropologist, I worked in India for 16 months between 2012 and 2018 to ask how farmers used these technologies – not as new fixes dropped into a social vacuum, but as elements of a larger set of relationships between people, markets, and the landscape.

Because the stakes are high and the implications far reaching, the future of agriculture is especially contentious in India. India has nearly 600 million small farmers, and the cotton sector has been particularly hard hit by issues of production and pesticide overuse. In the mid-1990s, cotton pesticide sprays accounted for nearly half of all pesticides used even though cotton was planted on just five percent of arable land. Some blame genetically modified seeds or insects for this agrarian distress; others celebrate new technologies and programs as means to empower rural economies.

These are important perspectives, but I think that this technological focus draws attention away from the daily, social ways that people make decisions. Instead, after speaking with hundreds of farmers, rural professionals, NGOs, government officials, and plant scientists working on GM cotton and certified organic supply chains, I’d argue that the biggest impact of these technologies is in the ways that they transform farmer knowledge and thus reshape agrarian life.

In 2002, the Indian government approved three GM seeds for commercial sale. Today, farmers now choose between 1,500 different seeds. Each one is a potential windfall in a context where agriculture is always a gamble. In the GM cotton sector, farmers leverage ambiguous input and labor costs against uncertain benefits of profit, often mimicking the decisions of their neighbors or seeking the advice of seed dealers before planting. This is a vision of agriculture that lives or dies by good yields from a cash crop.

The problem is that in this speculative environment, wanting good yields can be very far from taking steps to get them. Through a wide range of data collected since 2012, I’ve seen that farmers don’t see clear yield differentials that would help them choose particular seeds, farmers gamble by switching seeds frequently, farmers themselves don't know very much about the seeds they are planting, and the market is increasingly confusing. Seed choice is paradoxically crucial yet uncertain. Without good information to inform their choices, farmers make them amid a deluge of marketing, competition, consumption, and the persistent erosion of experiential knowledge.

This new normal of the farm masks a deep ambivalence about what it means to farm and to live well in rural India. Today, more than 95% of all farmers sowing cotton use GM seeds. This system is very effective at selling seeds and associated inputs. And yet, because it erodes farmer knowledge in favor of commercial expertise, it fails to address the underlying instabilities driving rural distress.

Much like GM technology, organic agriculture may help some farmers, under certain conditions, through alternative marketing. However, this story is complicated. Organic agriculture is not a panacea, and it rarely works according to the same agricultural logic of investments and yields that many farmers are used to following. Most organic cotton farmers in practice reap far lower yields than their GM-growing neighbors, and so organic certification programs incentivize low yields and strict regulatory protocols with material rewards like seeds, jobs, and financing, as well as new forms of celebrity and media attention.

Still, I think that it is a fallacy to say that these practices are performative and thus illegitimate. Quite the opposite: the ways that organic programs underwrite vulnerability, create social capital, and create new reward structures for farmer success determine their lasting success. That is, farmers experience the promise of organic cotton agriculture as a strategic choice to follow didactic instructions and a performance on a new kind of agricultural stage. These projects tend to succeed or fail on how well they understand these social needs. Leaning into this production can build not just stability, but help make farms more biodiverse.

Most discussions of these technologies boil down to suicides, yields, and pesticides. GM seeds and organic agriculture are unrelated to India’s farmer suicides; no data supports that conclusion. When India loosened market regulations and slashed social services in the mid-1990s, farmer suicides climbed in tandem with these neoliberal policies, a phenomenon echoed in rural communities with the rise of neoliberal policies around the world. National cotton yields rose in the early years of GM seeds, when fewer than 10% of farmers were planting them, but plateaued by 2008, when about 75% of farmers were planting them.

Initially GM cotton, which confers resistance to bollworm pests, helped farmers decrease pesticide sprays. Yet by 2008, the bollworm sized hole in the ecosystem opened a new niche for non-target pests like aphids and whiteflies. Today, more pesticides are sprayed on cotton genetically modified to be pest resistant than were applied before that cotton was released to the public. This terrible irony has nothing to do with the fact that the cotton is a GMO – it is the reality of farmers trying to chase ever higher yields within the confines of the rural capitalism where they live.

Anthropologists who study complex systems like agriculture often reach these muddied results – it’s complicated, we explain with exasperation. And yet I do see signs of hope in the data. Ultimately, the key underlying issue cotton farmers face is the unstable nature of seed choice, investments, and returns. Seeds, GM or not, sold and managed in a more collective system help to alleviate the symptoms of South India’s agrarian distress. By filtering the seed market, storing cotton, securing financing, and connecting farmers with buyers, cooperatives across South India help farmers learn about their seeds and apply local management knowledge. Suicides and pesticide use drop off thanks to these outposts of stability (although only organic programs ban pesticides outright). Through collaborative meetings and grassroots consultations to troubleshoot the local complications of farmwork, cooperatives are restoring trust and iterative learning to a labor sector in dire need of stability. Cooperatives that sell GM seeds and that support organic growers are taking the time to work with farmers and incentivize a different set of ways to be successful in an agricultural sector where cotton farmers internalize their failures and commit suicide. In doing so, they address fundamental causes of agrarian distress where GM seeds or mandatory organic regulations only scratch the surface.

There is a persistent danger in seeking technological fixes for problems rooted in complex political, social, and historical issues. In part, this is because the practice of sustainable agriculture on the farm, let alone the global challenge of feeding or clothing the world, is a social, and not technological, question. Ultimately, the allure and danger of technological fixes is that they ignore the daily, messy, important, social realities of agriculture.

We have an imperfect choice in an imperfect market. As consumers we can, in some ways, vote with our dollars to support social institutions that benefit farmers. We do not always have the information, means, or options available to exercise that choice when we buy clothes. And yet, our choices can have measurable impacts on others – not because our consumption or lack thereof will lead to structural change, but because we support larger institutions that incentivize local knowledge, management, and technology that allows rural communities to live well, on their own terms, as farmers.

Dr. Andrew Flachs researches food and agriculture systems, exploring genetically modified crops, heirloom seeds, and our own microbiomes. An assistant professor of anthropology at Purdue University, his work among farmers in North America, the Balkans, and South India investigates ecological knowledge and technological change in agricultural systems spanning Cleveland urban gardens and Indian GM cotton fields.  His book, "Cultivating Knowledge: Biotechnology, Sustainability, and the Human Cost of Cotton Capitalism in India," was released in November 2019 with the University of Arizona Press. Follow him on Twitter or Instagram @DrFlachsophone.