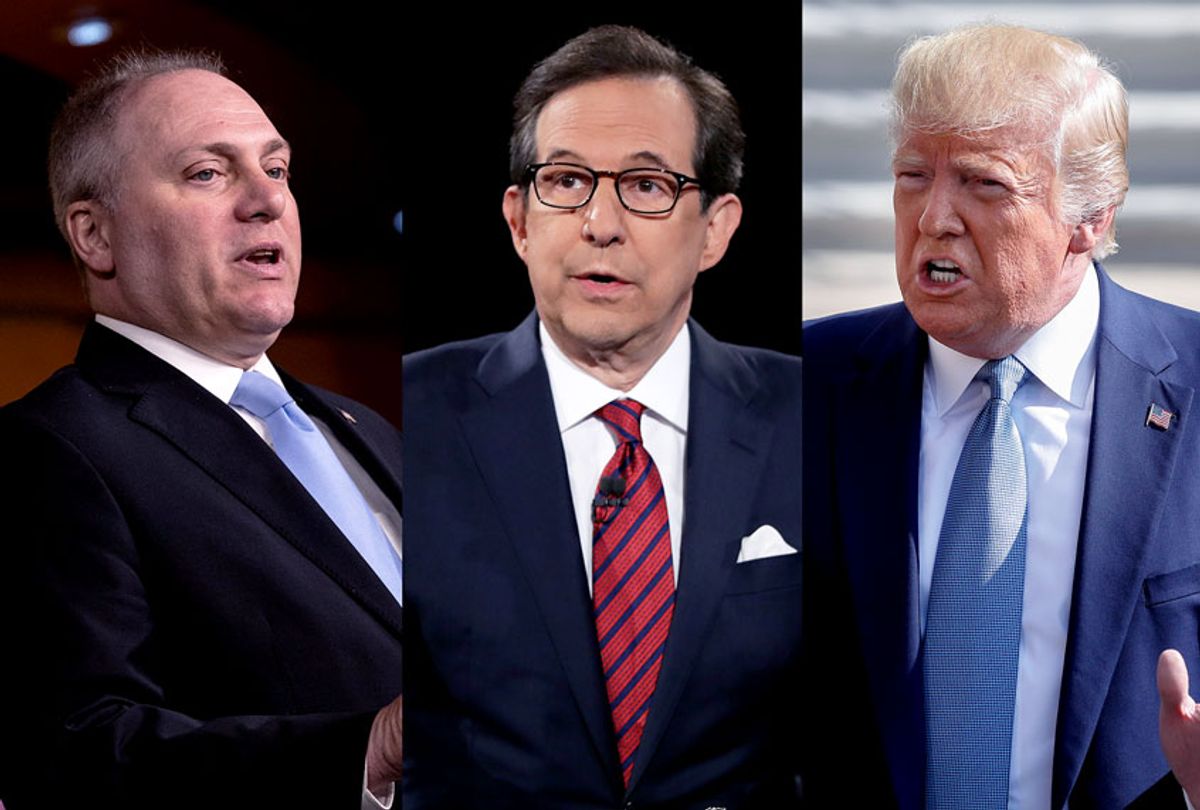 “@SteveScalise blew the nasty & obnoxious Chris Wallace (will never be his father, Mike!) away on Chris’s lowest rated (unless I’m on) morning show,” Trump tweeted Sunday. “This kind of dumb and unfair interview would never have happened in the @FoxNews past. Great job Steve!”

Trump also re-tweeted a clip from Wallace’s interview with Scalise, which cast the president in a more favorable light.

“This is an important point, Chris,” Scalise said in the segment, which Trump re-tweeted from the Louisiana congressman’s account. “There are a lot of people who worked in the Trump administration who have very countering views to that, and they have not been allowed to come forward. So it’s nice that some people can say one thing about a third-hand information phone call. There’s something else that other people can counter that with, and they haven’t been allowed to come forward.”

He added, “But ultimately, President Trump and [Ukrainian] President [Volodymyr] Zelensky were the ones on the call. Both of them said there was nothing wrong. The foreign minister of Ukraine just came out a few days ago to clear this up.”

A recently-released transcript of the deposition of Jennifer Williams, an aide to Vice President Mike Pence who listened to the call as it occurred, revealed that she "found the specific references to be more specific to the president in nature, to his personal political agenda" than the broader "foreign policy objective of the United States."

She later added, "I would say that it struck me as unusual and inappropriate.”

Scalise appeared on Wallace’s program to discuss the re-election of Louisiana Gov. John Bel Edwards, a Democrat, over the Republican candidate endorsed by Trump. The congressman argued that Rispone’s defeat did not reflect poorly on the president.

Trump and Wallace have exchanged harsh words in the past. In July, after Wallace interviewed South Bend Mayor Pete Buttigieg in a manner which he considered to be too friendly, Trump tweeted that “Fox is moving more and more to the losing (wrong) side in covering the Dems.” He also added that Wallace “never speaks well of me - I like Mike Wallace better...and Alfred E. Newman will never be President!”

Trump also tweeted angrily at Wallace last month after the Fox News host reported on the president’s Ukraine scandal, saying: “Somebody please explain to Chris Wallace of Fox, who will never be his father (and my friend), Mike Wallace, that the Phone Conversation I had with the President of Ukraine was a congenial & good one. It was only [Adam] Schiff’s made up version of that conversation that was bad!”

Trump got into a heated exchange with Wallace last year after the Fox News host pointed out that “leaders in authoritarian countries like Russia, China, Venezuela now repress the media using your word.”

After the president replied that he “can't talk for other people, I can only talk for me," Wallace said that “you're seen around the world as a beacon for repression."