Trump's decision to withdraw U.S. forces from Syria is the latest sign Trump has a soft spot for Putin, Power says 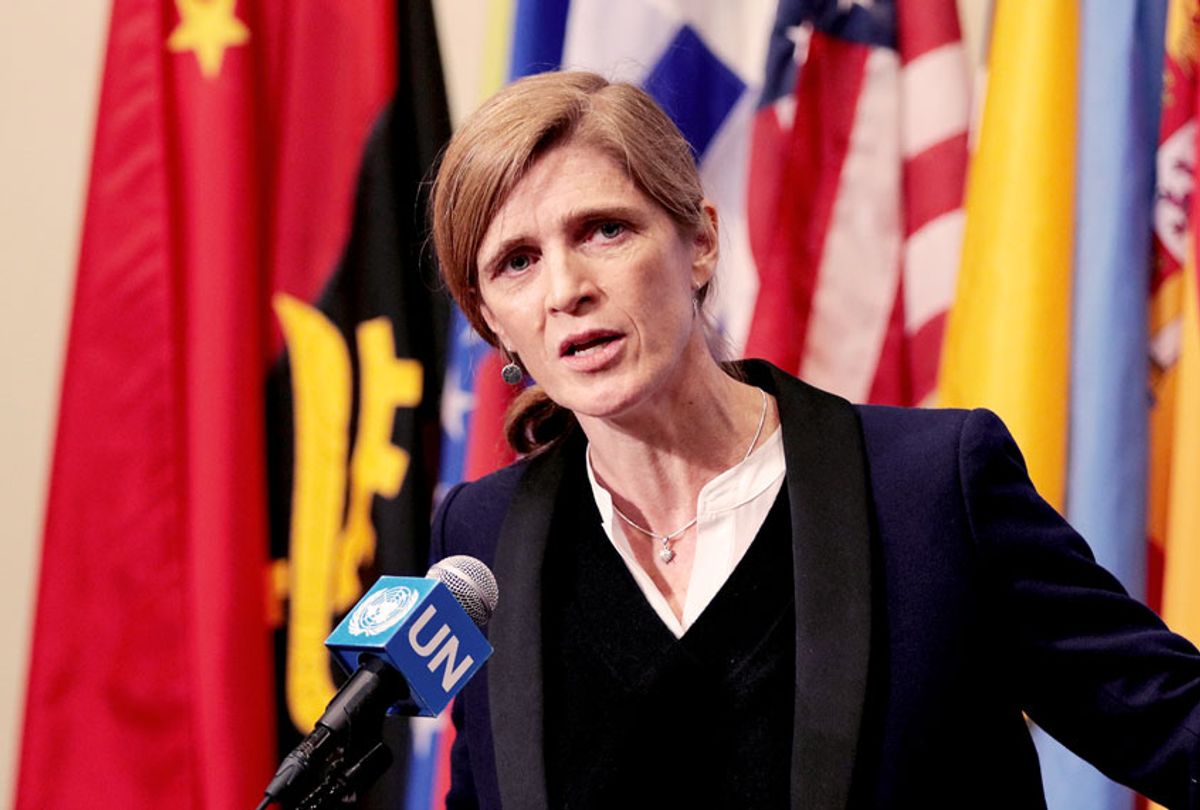 US ambassador to the UN Samantha Power (EuropaNewswire/Gado/Getty Images)
--

Former U.S. Ambassador to the United Nations Samantha Power on Monday sharply criticized President Donald Trump's decision to withdraw U.S. troops from northern Syria, suggesting that the decision is the latest sign that Trump has a soft spot for Russia and its authoritarian leader, Vladimir Putin.

"Every day @realDonaldTrump finds new ways to compensate Vladimir Putin for his election interference," Power tweeted alongside a link to a CBS News article about Russian troops taking command of a U.S. airbase in northern Syria.

"And every day Putin gains additional incentive to interfere again on Trump’s behalf in 2020," she added.

Power, who served as U.N. ambassador under former President Barack Obama, is a frequent critic of Trump’s foreign policy decisions. She said in October that Trump "had endorsed ethnic cleansing" when he heaped praise on Turkish President Recep Tayyip Erdoğan after the Turkish leader launched an offensive into northern Syria.

Power has suggested she might run for Sen. Elizabeth Warren's seat should the Massachusetts Democrat clinch the presidency. She is one of many bipartisan voices who have condemned Trump's abrupt decision to withdraw U.S. troops from northern Syria, which was followed by Turkey's incursion into the region.

Following a deal which forced the withdrawal of Kurdish forces in the region and ended the Turkish military offensive there, Turkish and Russian troops began joint military patrols in northeastern Syria, with the starting patrol covering a 54-mile area assisted by drones. Russia's defense ministry said nine military vehicles, including a Russian armored personnel carrier, were used.

Turkey launched a military offensive into a Kurdish-run area of northern Syria after the White House announced it was withdrawing all of its remaining troops from the region. The Turkish operation left dozens of civilians dead and displaced at least 200,000 people from their homes in the region.

Trump's decision to pull out of the region was met with rare bipartisan criticism at home from both Democrats and Republicans, who accused the president of abandoning its Kurdish allies who were instrumental in fighting the terrorist group ISIS in the region. Trump has defended his decision to pull U.S. troops from Syria, arguing that he "did not want to fight these endless, senseless wars — especially those that don't benefit the United States."

A telephone call between Trump and Erdoğan, which took place before the offensive, was widely seen as a "green light" for Turkey's move. Shortly after the call, the White House announced that it was withdrawing from the area, effectively removing any deterrence against Turkish forces. The Trump administration, denying it had approved the operations, threatened economic sanctions.

Last month, the House of Representatives overwhelmingly approved a resolution condemning the withdrawal, with nearly two-thirds of the chamber's Republicans supporting the resolution.