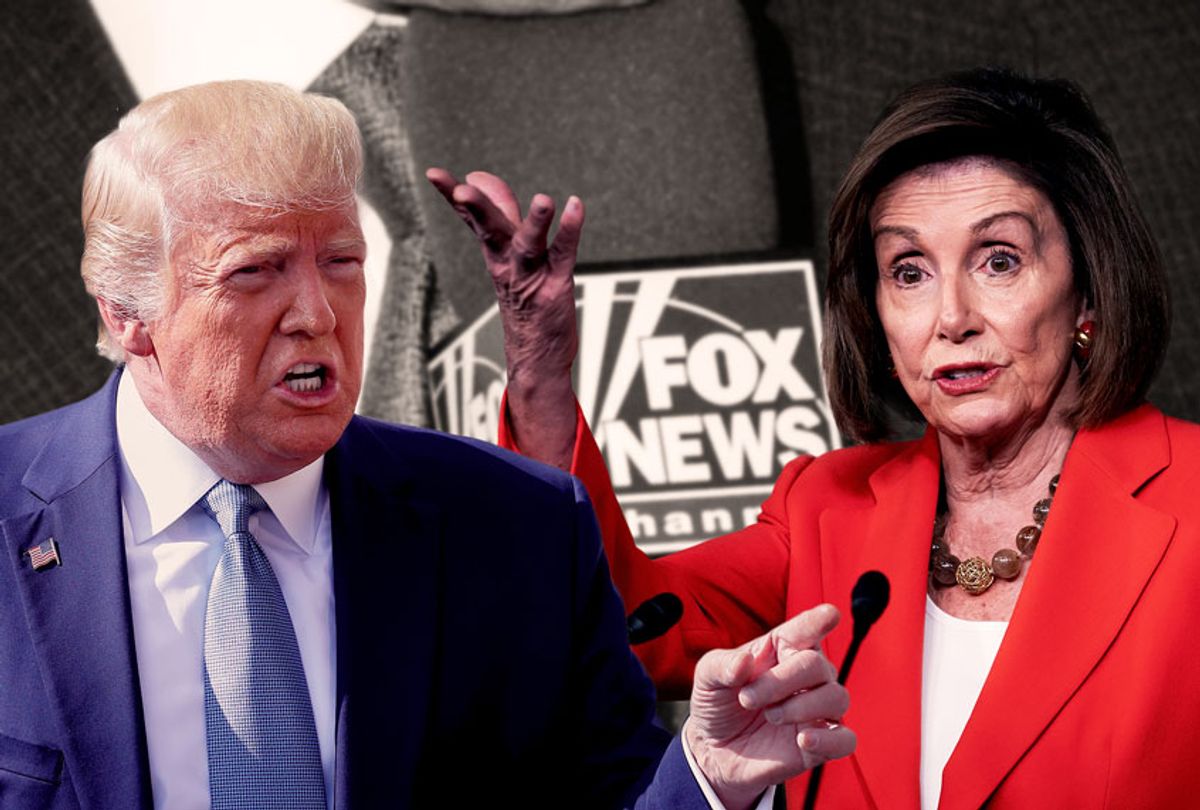 President Donald Trump attacked House Speaker Nancy Pelosi, D-Calif., in an early morning tweet, misquoting her while characterizing the ongoing impeachment inquiry as a scheme to let Congress determine his political fate rather than allow voters to pass judgment at the ballot box in November 2020.

"Nancy Pelosi just stated that 'it is dangerous to let the voters decide Trump's fate.' @FoxNews In other words, she thinks I'm going to win and doesn't want to take a chance on letting the voters decide," Trump tweeted after midnight Tuesday. "Like Al Green, she wants to change our voting system. Wow, she's CRAZY!"

Trump was referring to Rep. Al Green, D-Tex., one of the first Democrats to express support for impeaching Trump.

In his tweet, Trump suggested the quote about the 2020 election was made by Pelosi, but it appears the president actually lifted the misquote from Fox News chief congressional correspondent Mike Emanuel.

Late Monday, Emanuel said: "House Speaker Nancy Pelosi circulated a memo to Democrats tonight telling them it would be dangerous to let voters decide President Trump's fate when it comes to the Ukraine investigation."

Green also took a jab at Trump in response to his accusations.

"Mr. President, @SpeakerPelosi isn’t crazy. We are not trying to change the voting system. We are defending the democracy from your corruption and coverups, bigotry and bribery," he wrote. "You are unfit and you will be impeached."

House impeachment investigators are probing allegations that Trump leveraged a potential White House meeting and millions in military aid approved by Congress in an effort to pressure the president of Ukraine to commit publicly to investigations that would benefit him politically.

Trump is accused of pressuring Ukrainian President Volodymyr Zelensky to launch an investigation into former Vice President Joe Biden, one of the leading contenders in the Democratic presidential primary, and his son, Hunter. He is also accused of asking Zelensky to investigate a debunked conspiracy theory about Ukrainian interference in the 2016 presidential election. (There is no evidence of wrongdoing by either Biden in Ukraine.)

In a "Dear Colleague" letter to her caucus on Monday, Pelosi criticized the Republican argument that Trump's future should be determined by the 2020 election rather than impeachment. She argued members of Congress are filling their constitutional duty by conducting an impeachment inquiry after evidence of a possible wrongdoing by the president surfaced.

"The weak response to these hearings has been, 'Let the election decide.' That dangerous position only adds to the urgency of our action, because the president is jeopardizing the integrity of the 2020 elections," Pelosi wrote.

Public hearings resumed Tuesday with testimony from Lt. Col. Alexander Vindman, the lead expert on Ukraine on the National Security Council, and Jennifer Williams, a Russia adviser for Vice President Pence who listened in on the July 25 phone call between Trump and Zelensky, during which Trump pressed his Ukrainian counterpart about the investigations.

Later in the afternoon, testimony is expected from Kurt Volker, the former U.S. special envoy for Ukraine, and Tim Morrison, the former top Russia staffer on the National Security Council who also listened in on the July 25 phone call. Morrison resigned on the eve of his private testimony last month.

In a Sunday interview on "Face the Nation" on CBS News, Pelosi extended an invitation to Trump to testify either in writing or before the House Intelligence Committee to "speak all the truth that he wants."

Trump tweeted that he would "strongly consider" the offer on Monday morning.

"Our Crazy, Do Nothing (where's USMCA, infrastructure, lower drug pricing & much more?) Speaker of the House, Nervous Nancy Pelosi, who is petrified by her Radical Left knowing she will soon be gone (they & Fake News Media are her BOSS), suggested on Sunday's DEFACE THE NATION . . . that I testify about the phony Impeachment Witch Hunt," he wrote. "She also said I could do it in writing. Even though I did nothing wrong, and don't like giving credibility to this No Due Process Hoax, I like the idea & will, in order to get Congress focused again, strongly consider it!"