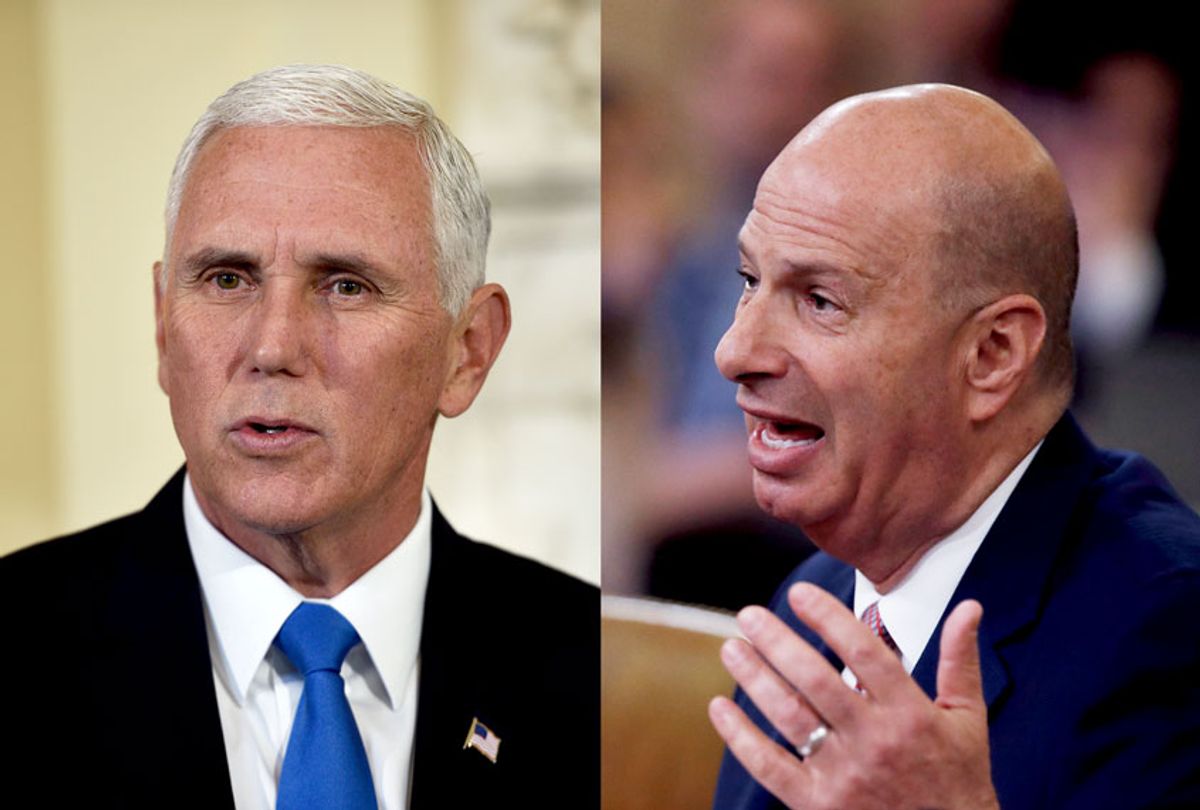 Sondland, having already implicated President Trump, various Cabinet and White House officials, and Trump attorney Rudy Giuliani and admitted a “quid pro quo” on Ukraine, told the House Intelligence Committee that he informed Pence of his “concerns” that military aid to Ukraine was conditioned on a public announcement of investigations into Joe and Hunter Biden and the 2016 election.

Sondland told the committee that he spoke to Pence on Sept. 1 before Pence met with Ukrainian President Volodymyr Zelensky in Warsaw after Trump held up nearly $400 million in military aid to Ukraine.

"I mentioned to Vice President Pence before the meetings with the Ukrainians that I had concerns that the delay in aid had become tied to the issue of investigations. I recall mentioning that before the Zelensky meeting," Sondland testified under oath.

“I just spoke up and I said, ‘It appears that everything is stalled until this statement gets made,’ something, words to that effect,” Sondland explained. “And that’s what I believed to be the case, based on, you know, the work that the three of us had been doing: [Ambassador Kurt] Volker, [Energy Secretary Rick] Perry and myself. And the vice president nodded like, you know, he heard what I said and that was pretty much it as I recall.”

Sondland later reiterated his comment and said that Pence did not ask Sondland anything in response to his comment.

After the testimony, Fox News anchor Chris Wallace pointed out that Sondland "took out the bus and ran it over President Trump, Vice President Pence, Mike Pompeo, John Bolton, Rudy Giuliani, Mick Mulvaney. He implicates all of them."

Pence’s office issued a statement in response to the testimony but did not actually contradict Sondland’s comments.

“The Vice President never had a conversation with Gordon Sondland about investigating the Bidens, Burisma, or the conditional release of financial aid to Ukraine based upon potential investigations,” Pence chief of staff Marc Short said. “Ambassador Gordon Sondland was never alone with Vice President Pence on the September 1 trip to Poland. This alleged discussion recalled by Ambassador Sondland never happened.”

Short added that Pence never raised the Bidens or investigations before the meeting.

CNN anchor Jake Tapper pointed out that Sondland “never characterized this as a ‘discussion’ or ‘conversation’ or claims such specificity” and noted that the statement did not actually refute the ambassador’s testimony.

"It became very clear to all three of us that if we wanted to move the relationship forward, President Trump was not really interested in engaging. He wanted Rudy to handle it,” Sondland testified. “Secretary Perry took the lead and made the initial contact with Rudy."

The Energy Department issued a statement denying what Sondland stated under oath.

"Ambassador Sondland's testimony today misrepresented both Secretary Perry's interaction with Rudy Giuliani and direction the Secretary received from President Trump. As previously stated, Secretary Perry spoke to Rudy Giuliani only once at the President's request," the statement said. "At no point before, during or after that phone call did the words 'Biden' or 'Burisma' ever come up in the presence of Secretary Perry."

Perry, who plans to step down later this year, had previously been implicated in the Ukraine scandal after he led the U.S. delegation to Zelensky’s inauguration in May as a last-minute replacement for Pence, who had originally been scheduled to attend. Sondland testified that Perry, Volker, and himself were the “three amigos” responsible for pursuing Giuliani’s demands in Ukraine.

Pence’s decision to pull out of the Zelensky inauguration also raised questions.

Lev Parnas, an associate of Giuliani who has since been indicted for campaign finance violations, is prepared to testify that he told a Zelensky aide in May that Pence would not attend his inauguration unless Zelensky publicly announced a probe into the Bidens, Parnas' lawyer said earlier this month.

CNN reported that Pence attempted to “distance himself from the impeachment inquiry” by leaving Washington minutes after Sondland’s testimony began.

“If Marc Short or any other Trump official wants to say something, they can say it under oath,” he wrote. “Otherwise, it's only so much sound and fury signifying nothing.”