Accusing Jews of being disloyal to the countries where they reside is anti-Semitic. There is a long history of it 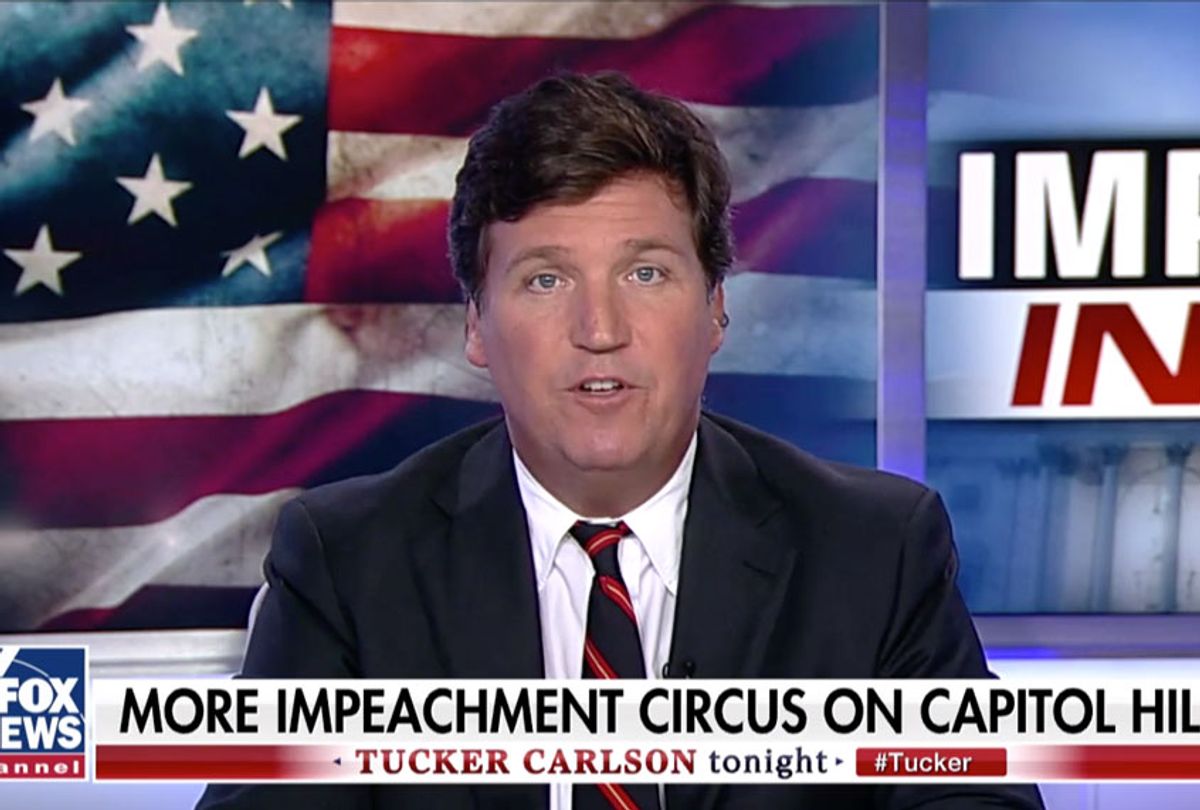 Carlson opened his monologue by claiming that “the circus train of impeachment remains stalled on the tracks.” He described Vindman as “a low-level U.S. army officer” and showed a clip in which Steve Castor, a Republican staff attorney, asked Vindman whether Oleksandr Danylyuk, a former Ukrainian national security adviser, had offered him the position of Ukrainian defense minister. While Carlson included the part of the exchange in which Vindman confirmed that he had been approached for the job, he edited out crucial context from the lieutenant colonel’s response.

Vindman said that although he had been offered the post three times, “every single time, I dismissed it. Upon returning, I notified my chain of command and the appropriate counterintelligence folks about the offer.”

He later added, “I’m an American. I came here when I was a toddler, and I immediately dismissed these offers — did not entertain them. The whole notion is rather comical that I was being asked to consider whether I would want to be the minister of defense. I did not leave the door open at all. But it is pretty funny for a lieutenant colonel in the United States Army, which really is not that senior, to be offered that illustrious a position.”

Carlson alleged that Vindman was someone who holds “strongly-held views on Ukrainian politics — views that may or may not align with U.S. policy on the subject.”

There is a long history of accusing Jews of being disloyal to the countries where they reside, which is a form of anti-Semitism. In the 1890s, a French captain named Alfred Dreyfus was accused of being a German spy and publicly disgraced despite exculpatory evidence. The dual loyalty slur appeared more recently when Trump claimed that American Jews who vote for Democrats, whom he in turn claimed were anti-Israel, were “disloyal.”

In response to a Salon request for comments, Fox News sent a statement attributed to Carlson.

“Our segment noted that Lt. Col. Vindman was offered a high-ranking position in the Ukrainian government — a fact that emerged during his congressional testimony,” Carlson said. “Lt. Col. Vindman’s religious faith was never mentioned, because it is entirely irrelevant. Any suggestion to the contrary is outrageous and dishonest.”

Carlson is not the only Fox News host to call Vindman’s loyalty of country into question. Last month, fellow primetime colleague Laura Ingraham commented that Vindman “immigrated from Ukraine along with his family when he was a child and is fluent in Ukrainian and Russian. Ukrainian officials sought advice from him about how to deal with Mr. Giuliani, though they typically communicated in English.”

She added, “We have a U.S. national security official who is advising Ukraine while working inside the White House, apparently against the president's interest. And, usually, they spoke in English. Isn't that kind of an interesting angle on this story?”

During his opening statement to the House Intelligence Committee on Tuesday, Vindman addressed the various right-wingers who have attacked him and others who have come forward to attest to inappropriate behavior by Trump under oath during the impeachment inquiry.

“I want to take a moment to recognize the courage of my colleagues who have appeared and are scheduled to appear before this committee,” Vindman said. “I want to state that the vile character attacks on these distinguished and honorable public servants is reprehensible. It is natural to disagree and engage in spirited debate — this has been our custom since the time of our Founding Fathers — but we are better than callow and cowardly attacks.”

Vindman, who personally listened to Trump’s July 25 phone call with Zelensky, told Congress on Tuesday that he was “concerned” by the call, because he thought it was “improper.”

“It is improper for the president of the United States to demand a foreign government investigate a U.S. citizen and political opponent,” Vindman said. “It was also clear that if Ukraine pursued an investigation into the 2016 election, the Bidens and Burisma, it would be interpreted as a partisan play. This would undoubtedly result in Ukraine losing bipartisan support, undermine U.S. national security and advance Russia’s strategic objectives in the region.”

You can watch the full Carlson segment below: