"Bikram: Yogi, Guru, Predator" separates the man from the myth, revealing a monster 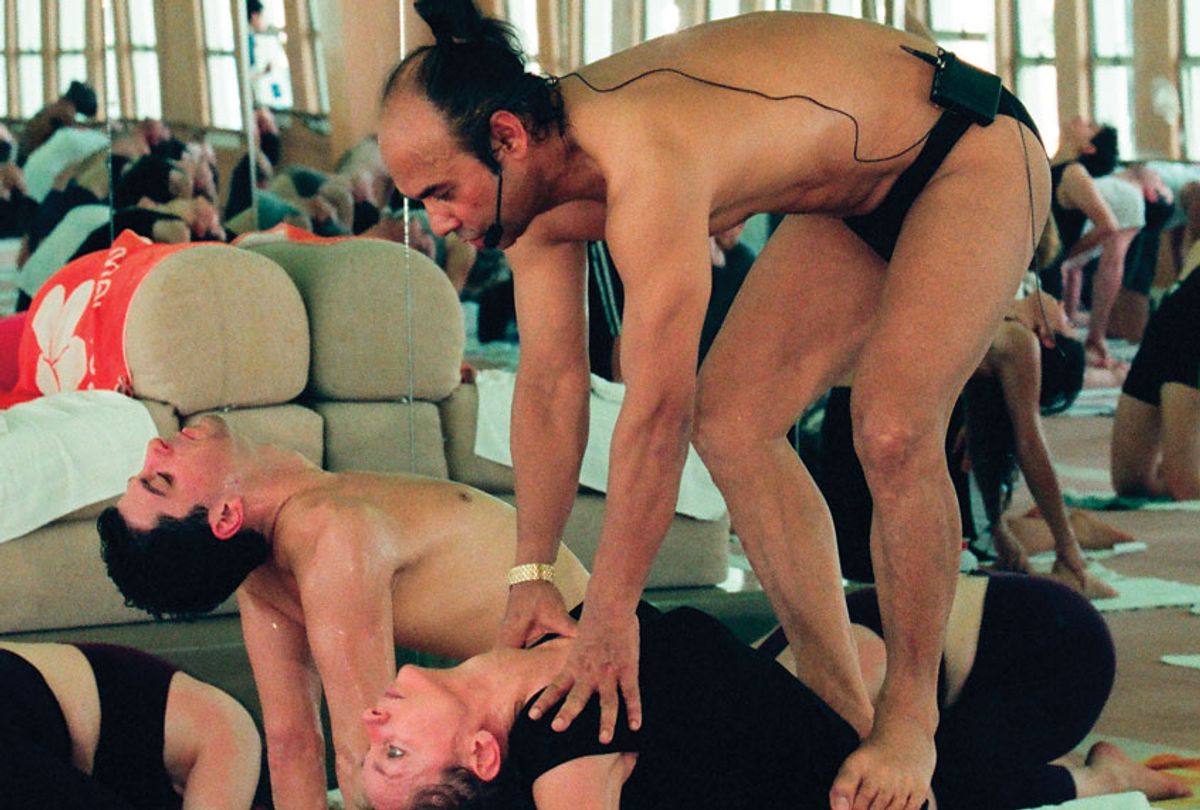 Midway through teacher training with the revered — and self-proclaimed — hot yoga guru Bikram Choudhury, student Sarah Baughn was pulled into Choudhury’s office where he asked her what they were going to do about their relationship. The two weren’t emotionally or sexually involved, but Choudhury kept pressing Baughn about what he perceived to be their connection; later that day in class, in front of an entire room of students, he placed her in standing bow pose. Choudhury pulled on her leg, which was extended above her head, and pushed her heart towards the floor.

Then, while Baughn was in this incredibly vulnerable position, Choudhury pushed his hips into her, continuing to whisper into her ear about how they would navigate their relationship.

Baughn recalls that she was sickened and later confided in a male teacher-in-training, who responded: “If you decide to stay, I recommend you do what I do. Separate the man from the teacher.”

Filmmaker Eva Orner’s new Netflix documentary “Bikram: Yogi, Guru, Predator” spends a lot of time doing just that — parsing through the mythology Choudhury wove about himself, what happened at his $10,000 teacher trainings and how he treated the women in his sphere.

Soon after arriving in the United States in the early 1970s, Choudhury — with his bad boy image and his particularly punishing brand of hot yoga — began racking up a list of celebrity clients that included Elvis Presley, Richard Nixon, Shirley Maclaine, and George Harrison. Once he opened his studio and teacher trainings to the masses, he started cultivating a near-cultish devotion from his students.

The first portion of the documentary focuses on how exactly this happened. Part of this was through extensive media exposure; Choudhury — who often only taught in a black Speedo and a Rolex — was a charismatic figure who fed lines in interviews about nonexistent yoga championships and purported health benefits of hot yoga that went totally unchecked by reporters.

But another part of Bikram yoga’s mass appeal was in the actual results participants reported. In a series of interviews, practitioners detail how the practice helped them with arthritis pain, joint stiffness, and weight loss.

Through it all, Choudhury elevated himself as something of a god of his own realm, and his students could only advance if they recognized him as such, from tolerating his vicious in-class verbal attacks to acquiescing to his late-night massage requests, that often turned into unwanted physical advances. His students would put up with it, until they just wouldn’t anymore.

“Bikram: Yogi, Guru, Predator” builds this tension adeptly and also explores some of the nuances of the Bikram community that allowed Choudhury’s behavior to go unchecked for so long. For many participants, Bikram yoga wasn’t just a grueling physical experience — there was a certain element of inherent spirituality as well. This set Choudhury up as almost a drill sergeant-meets-priest, someone in charge of his students’ physical and spiritual wellbeing.

It’s a position of inherent industry power and privilege, one that offered similar access to his victims as Dr. Larry Nassar, whose own crimes were explored in the recent documentary, "At the Heart of Gold: Inside the USA Gymnastics Scandal.” In the wake of #MeToo, these stories of abusers who operate in plain sight seem particularly important to tell, especially of people who have ardent defenders and fans.

As the documentary lays out, those who spoke out against Choudhury — including Sarah Baughn who filed suit against him in 2013 for allegedly trapping her in his hotel room and forcibly trying to initiate sex — were initially ostracized in the hot yoga community. But after she went public with her story, others began to emerge. A student named Larissa Anderson details how she was raped by Choudhury in his home; his former employee Micki Jafa-Bodden sued him for unlawful termination after she began investigating his predatory behavior. Because of that, Choudhury is now essentially a fugitive from the law, having fled the United States in 2016 after losing a $7.5 million civil lawsuit to Jafa-Bodden that he’s yet to pay.

Though that doesn’t mean his story is over; there are some clear signs that point to Choudhury’s desire to mount a comeback, and there are still many followers who would welcome him with open arms. But over the course of 90 minutes, “Bikram: Yogi, Guru, Predator” successfully separates the man from the myth and reveals a monster.