Radio host Thom Hartmann: If Trump's re-elected, "we may slide into straight fascism" 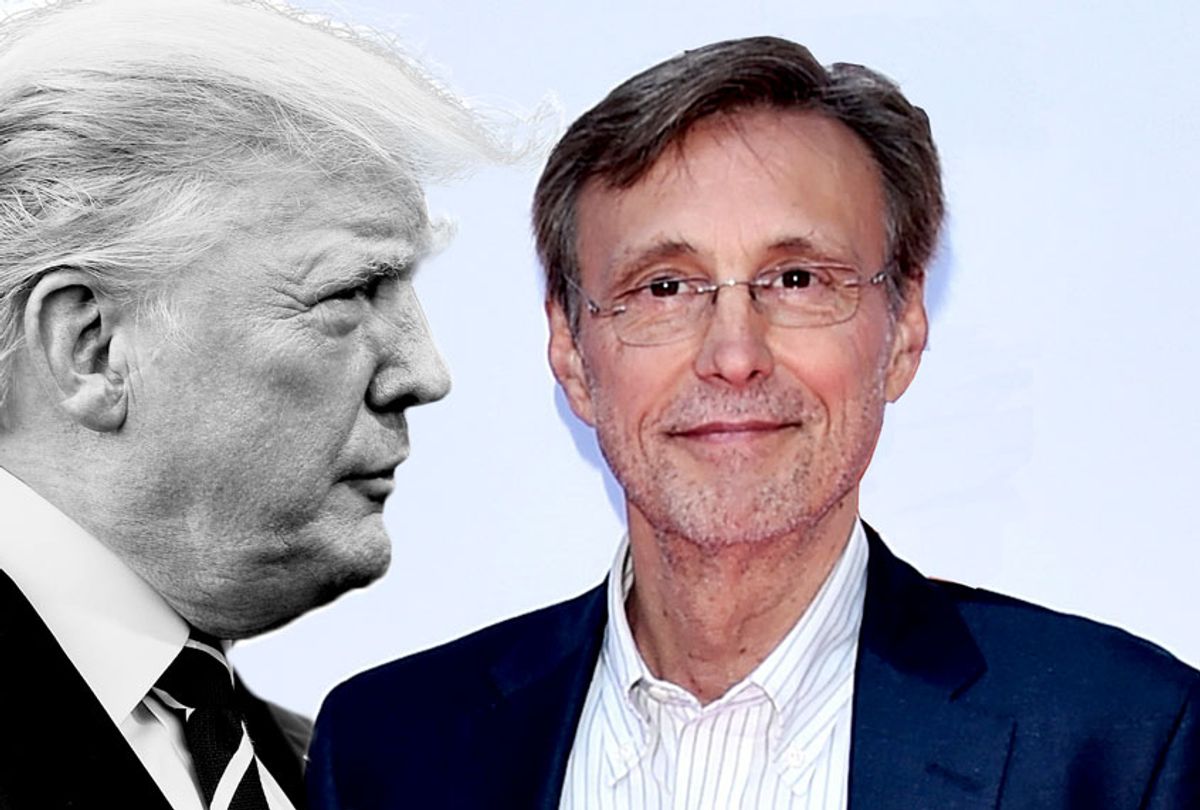 Om Wednesday night the Democrats held their fifth presidential primary debate. It was a largely uninteresting affair, presenting an opportunity for Democratic candidates to position themselves as being the most "electable" among their peers and best able to defeat Donald Trump.

A far more exciting backdrop was provided by the public impeachment hearings being held in the House of Representatives. After a week or so of public hearings it is increasingly obvious that Donald Trump and his minions engaged in a Mafia-style bribery, extortion, and shakedown operation against Ukraine, with the goal of forcing that nation's leaders to aid Trump in the 2020 presidential election. This is a gross abuse of power and violation of the rule of law and the Constitution. It is one example among many of Donald Trump, his minions, the Republican Party, their disinformation news media and their army of cultists putting loyalty to Trump over the good of the United States.

Public opinion and other research suggests that the Democratic Party's nominee should defeat Donald Trump in 2020. But which of the Democrats now running has the best chance? Will Joe Biden, Elizabeth Warren, Bernie Sanders or some other candidate be the champion of American democracy against the tyrant in waiting who now occupies the Oval Office?

I recently spoke with Thom Hartmann about the Democratic Party, the 2020 presidential election, and the Age of Trump. He is the host of the most popular progressive radio show in the country, a New York Times bestselling author, and one of the country's leading progressive voices. Hartmann's new book is "The Hidden History of the Supreme Court and the Betrayal of America."

Hartmann's program can be heard from 12 to 3 p.m., Eastern time, via the nonprofit Pacifica Network and on commercial radio stations all across the United States.

In this conversation, Hartmann argues that concerns about "electability" are misplaced and that a progressive candidate such as Warren or Sanders actually has a much better chance of defeating Donald Trump than Joe Biden does. Hartmann also sounds the alarm about the deep desperation which moved so many Americans to support such a dangerous and unqualified person in the first place. Hartmann also expressed his deep concern that if Trump wins re-election it will be the end of American democracy, and that Trump and the Republican Party's right-wing paramilitaries and political terrorists will be fully unleashed against the American people.

As usual, this conversation has been edited for clarity and length.

What advice do you have for Americans who feel lost and devastated by Trump’s presidency and are increasingly stuck in a state of learned helplessness?

The one thing that causes me to think that we might not — and which is the subject of my new book "The Hidden History of the Supreme Court and the Betrayal of America" — is how the United States Supreme Court has basically betrayed our country. The definition of a democracy is where the people vote for what they want and then they get that through the government. That has not been the case since 1981.

Whether it's the social safety net, protecting the environment, decreasing our military activity abroad, making policing more humane, recognizing civil rights, encouraging voter rights, strengthening the middle class and protecting Social Security and Medicare, none of those things have happened. In fact, the opposite has happened.

How is Trumpism a symptom and not the cause of much bigger social, political, economic and other cultural problems in America? Renewing the country's democracy to prevent another fascist president is going to require deep systemic change, not just voting Donald Trump out of office.

The thing that concerns me the most is that in the United States we now have corporations and billionaires who have taken over our political system completely. Social scientists have shown that what the bottom 90% of income earners want in America is literally random noise for America’s policymakers. By comparison, what the top 10% want is consistently enacted through legislation. This means no more democracy. And then on top of that power dynamic the courts have swung to the far right and are hard corporatist.

I'm worried that if we as a country do not get money in politics under control quickly, we are going to slide into straight fascism, what is a type of authoritarian fascism. The United States is heading in that direction. The 2020 election might interrupt that tide. But then the other big danger is, say for example there is a Democratic president after Trump and perhaps even the Democrats get control of the House and Senate and then everyone says, "Well, we've got to be careful that a future president does not have as much power as Trump does."

Then we start dialing back the powers of the presidency at the exact same time that a President Sanders or a President Warren might be trying to use the powers of the presidency to get corporate money out of our political system, to rebuild the social safety net, and to reject Reaganomics by creating a return to a better and more equitable type of New Deal economics. Those efforts may be sabotaged before they even begin. Such an outcome would be something that both Republicans and corporate Democrats would be quite enthusiastic about.

The Ukraine scandal is another example of Trump’s many abuses of power. There are also the emoluments clause violations and other corruption by Trump and his inner circle. But what needs to be spoken about much more by the American mainstream news media is that the Trump regime has exposed an entire criminal class of American elites. This is state capture and rent-seeking behavior that one usually sees in banana republics and failed democracies, not “advanced democracies.”

The common denominator among many countries is where democracies — even if only for a relatively short period of time — fall into a more authoritarian form of government. And in every case, they're being run by a person who has the strong backing of a criminal class of billionaires or other very rich people.

There is a criminal wealthy class in the United States. We just don't call them criminals. But they engage in massive tax fraud and generally get to do whatever they want without fear of punishment or being thrown in jail.

What is your assessment of the health of the rule of law in America under the Trump regime?

My main concern is the institutions of the law.

When the institutions of law become the law breakers — for example, when the Justice Department prosecutes itself as Trump is directing Bill Barr to do right now in service of these conspiracy theories about Ukraine and Russia and whistleblowers — the legal institutions are being politicized. This represents an institutional breakdown that then leads to the dissolution of a functioning system of law.

Where is the mass public resistance to the Trump regime? There should be a national strike. Have the American people wholly surrendered?

I think people have been beaten down. America is being governed by surprise. That consistent shock, instability and insecurity is a strategy used by autocrats. Right now, Donald Trump is using the presidency to fuel his ego and put money in his own pockets. My concern is that when Trump leaves and he gets replaced by an even more corrupt Republican president — which will happen — that Trump successor will have studied the playbook and will be much more dangerous.

When a Trump Republican successor gets in the White House and he believes that it is his destiny to alter the fate of the world or it is his job to bring peace for a thousand years or they have a God complex where they believe that it is their destiny to crush all opposition in the name of what's good and holy, then I am not sure how brutal things will become in this country.

What would a Walter Cronkite-like figure have done with someone like Donald Trump?

I do not believe that Donald Trump would have become president if there were a Walter Cronkite and that type of serious news programming. If real news people were in control, they would have looked at what Trump was doing and said, “This is attention seeking behavior and we're not going to treat it as 'breaking news’.”  Real news people would not have given Donald Trump billions of dollars in free time.

How do you assess the Democratic candidates and the presidential primary debates?

I am hopeful that we will get one of the two progressives in the race at the top of the Democratic Party presidential ticket for 2020. Then there will be enough progressives in the House and Senate that we can revisit the New Deal or the 1960s Great Society and much-needed social programs can be moved forward and implemented appropriately.

But instead of progressive candidates, what we're getting is the safety valve. Issues such as guaranteed minimum income are being spoken about during the Democratic presidential primary debates because elites know none of those issues have a chance of ever becoming law in the United States right now.

I believe that Donald Trump is likely going to win another term in 2020, and do so by a comfortable margin. What is your prediction?

My concern is that if Donald Trump wins a second term, that is the end of the United States of America. Donald Trump has no understanding of constitutional governance. He and his Republican Party and other supporters do not care about such things.

If Trump wins again there will be right-wing paramilitaries, enforcers, and brownshirts in the streets. But I do think we are too far out from Election Day 2020 to know if Trump will win. It will largely by determined by who the Democrats choose to be their nominee. My biggest fear is that if a milquetoast Democrat is chosen then we basically repeat the Clinton presidency. With that outcome, America continues to slide in the direction of full-on corporatism.

And what about these discussions about “electability” and the field of Democratic presidential nominees? How do you respond to those people who tell you on your radio show that they really like Bernie Sanders or Elizabeth Warren but they are voting for Joe Biden because he has the best chance to win over “Middle America”?

It's nonsense. How does anyone know that? What makes someone think that Biden has the best chance of winning? Just look at the primaries. Consider how Bernie did in the Midwest, for example.

Bernie or Warren have the potential to walk away with it all. The American people are so desperate for change. They know that they've been screwed by Reaganomics, which was a destructive assault on the American middle class. There are people so desperate in America that they are willing to vote for an orange-faced buffoon or mobbed-up New York real estate guy. That is an act of desperation.