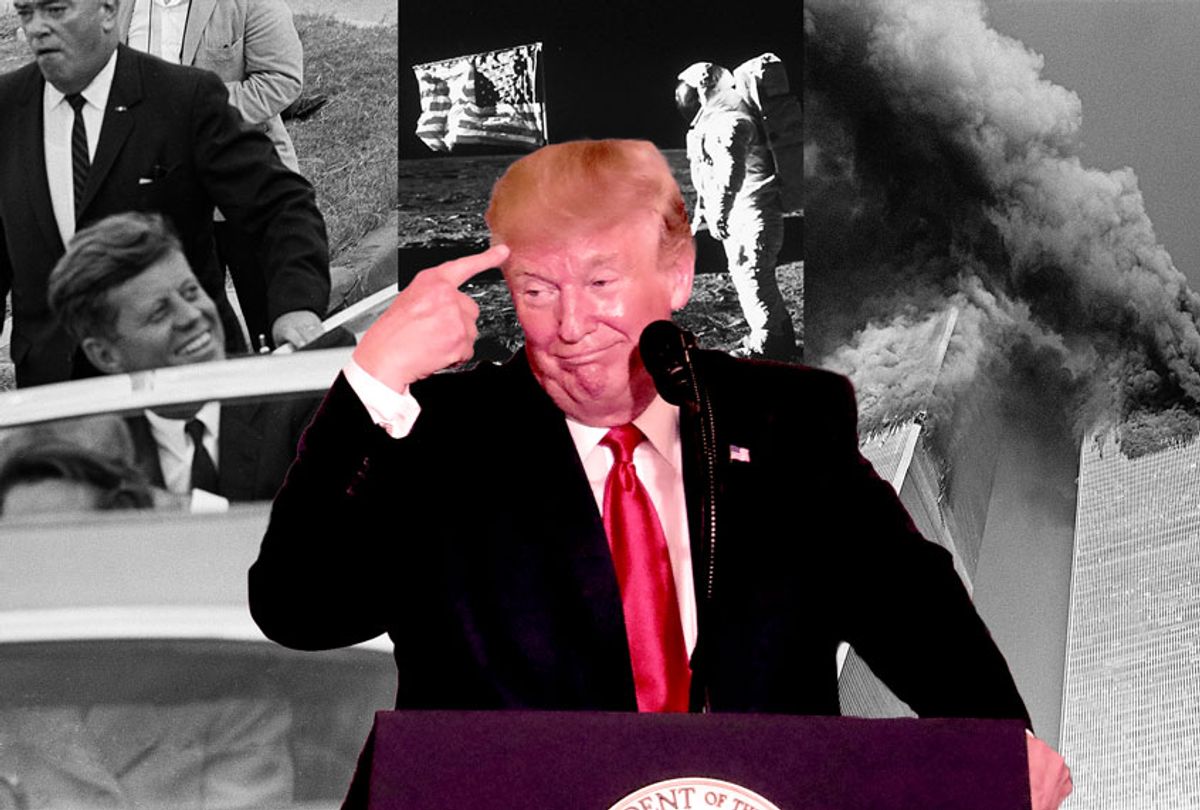 After two weeks of testimony in the impeachment hearings, we have the broad outlines of Donald Trump's conspiracy to extort Ukraine into helping him cheat in the 2020 election. We know much about it, even though most of it — except, most notably, for the testimony of EU ambassador Gordon Sondland — came not from people who were running the conspiracy, but from people ancillary to it. That includes people who got roped into going along with it, like diplomat Kurt Volker, people who just witnessed weird stuff going on, like diplomat David Holmes, and people who actively resisted it, like diplomat Bill Taylor and Army Lt. Col. Alexander Vindman.

The reason we have so much information, despite the tight lips of most of the principal figures who have declined to testify — Secretary of State Mike Pompeo, acting White House chief of staff Mick Mulvaney, Energy Secretary Rick Perry, Vice President Mike Pence, presidential lawyer Rudy Giuliani and, of course, Trump himself — is due to the half-cocked and bumbling way Trump and his buddies implemented the conspiracy. Looking over the whistleblower complaint and the testimony, one wonders if Trump wanted to be caught, which would explain why he extorted Ukrainian President Volodymyr Zelensky in front of multiple witnesses, shouted into an unsecured phone when the person on the other side in a public place, and took many other actions bound to cause alarm among the dozens of people directly engaged with Ukrainian diplomacy.

Part of the issue that is that Trump really is an incompetent fool. But really, the implosion of this conspiracy also tells us something about the difference between real-life conspiracies and the ones that haunt our imaginations, either through many popular conspiracy theories or in movies and TV shows like "The X-Files" or "Chinatown."

In the world of conspiracy theory, all the conspirators have the same agenda and are all working tirelessly towards the same goal. The conspirators communicate clearly with each other but simultaneously shield their true intentions from the rest of the world. The conspiracies begin for rational, if nefarious reasons. The mechanics of the conspiracy, in this view, may be complex, but the plans are meticulously planned out and executed. In this imaginary world, conspiracies are self-contained, sophisticated and well-organized.

Instead, real-life conspiracies are often more like Frankenstein monsters built out of groups of people who have different, if aligning motivations. (Until they don't.) They often involve a lot of confusing communications between conspirators, especially if they are trying to evade detection. And they're often half-baked  and reactive, leading to lots of improvisation — especially in the face of unanticipated circumstances — and therefore often sprawl far beyond their original boundaries.

Trump's Ukraine conspiracy is a perfect example of the rat's-nest nature of real-life conspiracies. Instead of being hatching a meticulous scheme, it seems like Trump and Giuliani had a mishmash of goals, some hazier than others:  Rat-f**cking former Vice President Joe Biden, fueling conspiracy theories about the 2016 election, undoing Barack Obama's anti-corruption efforts in Ukraine, sticking it to a country for which Trump had developed an irrational hatred for, quite possibly pleasing Russian President Vladimir Putin and, as always, grifting.

It seems, from the timeline, that it didn't even start out as an extortion scheme, but more like a scheme to work with corrupt Ukrainian officials who were angry about losing power. Somewhere along the way, that turned into this plot to blackmail Zelensky.

As often happens with real life conspiracies, the number of people involved kept ballooning. Some, like Mulvaney and Pompeo, were in it because they want power. Some, like Perry and Giuliani, had dollar signs in their eyes. Some, like Sondland, seemed to be in it because it seemed fun and exciting. And as the circle ballooned, some people — many of whom have now testified — didn't want to be involved at all, but went along with it to different degrees because it seemed like giving in was the only way to get out of it.

Now that the extortion conspiracy is morphing, yet again, into a cover-up, the circle of conspirators has widened to involve pretty much every Republican holding office in Capitol Hill. And far from being conducted in the shadows, this conspiracy is happening right in front of our faces.

These differing motives are why real-life conspiracies tend to get exposed. Once people involved realize it's not working for them — which happened to a lot of people who got caught up in this — they often turn against the conspiracy.

This groping, confusing nature of real-life conspiracies can be seen in such previous examples as Watergate and the lead-up to the Iraq war, when the George W. Bush administration tried to deceive the world by lying about Saddam Hussein's imaginary WMDs.

Watergate was notoriously described as a "third-rate burglary attempt" by Richard Nixon's press secretary at the time, and that was a fair enough assessment — the burglars didn't even get the dirt they were trying to score when they bugged phones at the Democratic Party's headquarters. The conspiracy to cover it up was sprawling and confusing, for the same reasons Trump's conspiracy is sprawling and confusing, because it was of different people with different motives and often poor communication, which eventually unraveled.

The WMD conspiracy "worked," insofar as it provided justification for the U.S. to launch a disastrous war. But it's safe to say that wasn't because Bush and his allies were a bunch of secretive geniuses who effectively bamboozled the public. Anyone with common sense could see they were lying at the time, and soon enough the evidence to prove it started pouring in from every corner. Despite the conspirators' assurance that they would get into Iraq, solve that country's problems and get out, the entire war turned, as many people predicted it would, into a disaster.

Both of these examples prove the larger, more important point about how real-life conspiracies differ from conspiracy theories: Whether or not people get away with it has nothing to do with how good they are at keeping secrets. Secrets come out, especially when the number of people who know them keeps growing.

The reason that the Bush administration's WMD lies "worked" was not so much that people actually believed them, but that it was to their benefit to act like they believed them. The 9/11 attacks, which Bush — in a manner typical of real-life conspiracies — shamelessly exploited, created a situation where it was easy to browbeat Democrats into complicity with accusations that they weren't patriotic. Republicans, both voters and politicians, pretended to believe the lies out of tribal loyalty.

Nixon's conspiracy blew up in his face in the end because, for similarly complex political reasons, the powers that be ultimately felt it was easier to let him go.

We're seeing a similar thing unfold with Trump's conspiracy. There's little reason to believe Republicans actually believe their claims that there is reasonable doubt about Trump's guilt. Everyone, I suspect, knows he's guilty. But right now, they've got lots of political reasons to pretend otherwise, which is why Trump is headed toward a likely non-conviction in the Senate, despite the overwhelming evidence against him.

But in fact the opposite happens. Watergate led to a major uptick in belief that JFK had been assassinated by a conspiracy and that the moon landing was faked. The realization that Bush was lying to us about WMDs spurred the 9/11 "truther" movement arguing that he, not al-Qaida, had brought down the World Trade Center. The Reagan administration had plenty of real conspiracies — Iran-Contra, the distribution of crack by the CIA — but it led to the conspiracy theory that AIDS was invented to kill off "undesirable" populations.

With all the real-life evidence that yes, the powers that be are out to get us, it's odd that people feel such a powerful need to make weird stuff up. But the chaotic nature of real conspiracies is unsatisfying. It's more gratifying to imagine that our lives are being controlled by clever people who are competent both at manipulation and keeping secrets, and that mere exposure is enough to lead to justice for the bad guys.

The reality — that our supposed genius overlords are a bunch of bumbleheads who only get away with it because they have power they don't deserve — is too frustrating to bear. It makes us feel hopeless and helpless. So we tell ourselves the other story, the one in which our leaders are wicked, but at least they know what they're doing. If only we learn the truth, we'll be free of their hold on us.