"We cannot continue to live like this": Mass protests in Colombia latest in Latin American uprising

"What happened in Chile sent a forceful message." 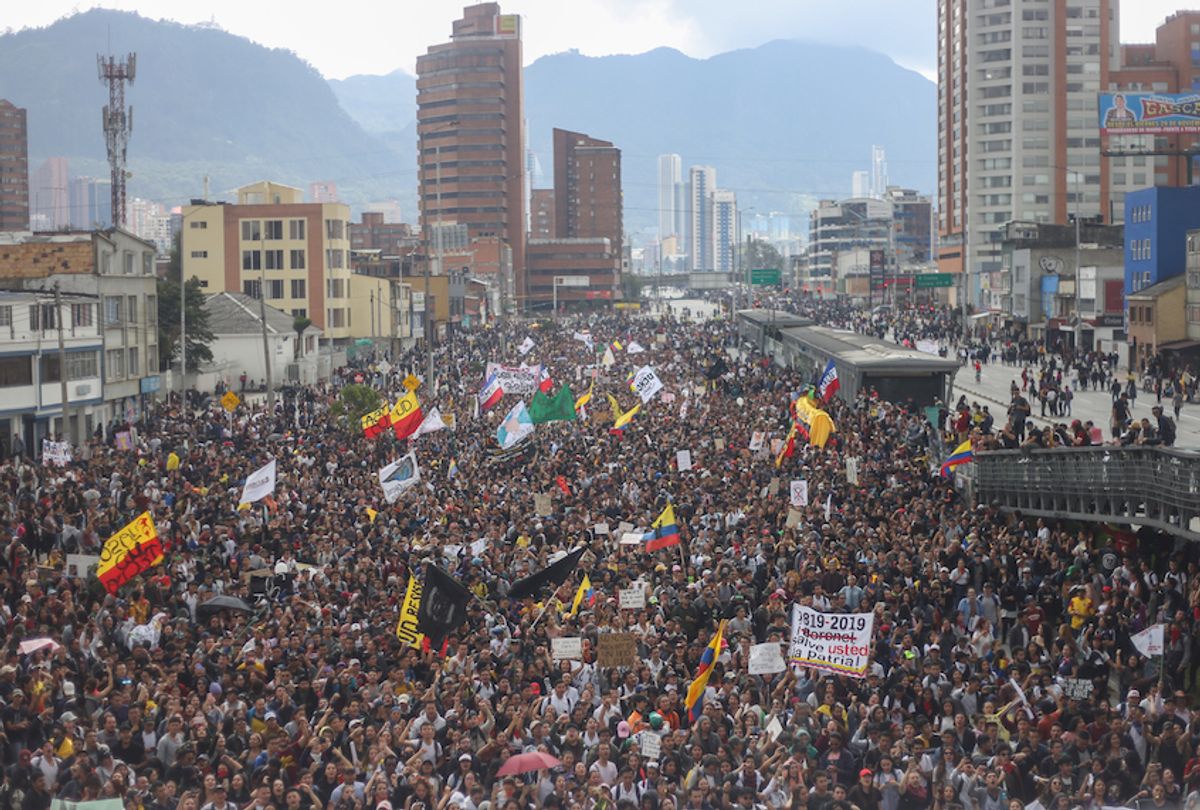 A panoramic view of the people who went to the protest of the national strike in the city of Bogota, Colombia, on 21 November 2019. (Daniel Garzon Herazo/Nurphoto via Getty Images)
--

An estimated over 207,000 protesters across Colombia upset at decades of right-wing rule took to the streets Thursday in the latest progressive people's movement in Latin America to explode into the streets, following movements in Chile, post-coup Bolivia, and Ecuador.

Demonstrators clashed with security forces in the capital, Bogotá, and elsewhere across the country.

"We are standing up to protest and tell all humanity that we need to demand change," protester and actress Aida Prado told The Associated Press.

The demonstrations, which had been planned, began with a general strike against the policies of President Iván Duque. Protesters, many carrying the Indigenous wiphala flag in solidarity with the people of Bolivia, expressed their anger over Duque's plan to cut pensions in the country and the lack of real forward movement in peace talks with the rebel group Revolutionary Armed Forces of Colombia, or FARC.

"We live in a country that kills children, that kills social leaders, with a government that is against peace," businesswoman Alexandra Guzmán said. "That is why we have to change something. We cannot continue to live like this."

According to The Guardian, the protests led to clashes with police forces:

The marches began in Bogotá largely without incident, although a few clashes broke out near Bogotá airport between protesters and riot police around midday. As the rain cleared, more confrontations broke out across the city in the early evening. Explosions could be heard across the city. Teargas was fired in the Plaza de Simón Bolívar and at the campus of the National University, where protesters battled with security forces.

The economic and social pressures on Colombian society that led to the demonstrations likely won't lead to the kind of sustained movement that's been seen in other parts of Latin America, Bogotá Rosario University professor Yann Basset toldDW.

"We're not in a pre-insurrectional climate," said Basset. "I'm not sure there's a general rejection of the political system."

Bolivian demonstrators opposed to the right-wing regime that seized power in the country after a coup on November 10 that resulted in the forced resignation of democratically elected President Evo Morales have protested in cities and across the central South American nation for weeks. A Chilean protest movement that began in October has resulted in the country's neoliberal leadership promising to rewrite the constitution; also in October, protests against austerity erupted across Ecuador.

Student leader José Cárdenas told AP that the marches in Colombia were inspired by the other movements on the continent.

"What happened in Chile sent a forceful message," he said.