How can we expect Republicans to judge Donald Trump fairly? At this point, nearly all of them are in on the crime 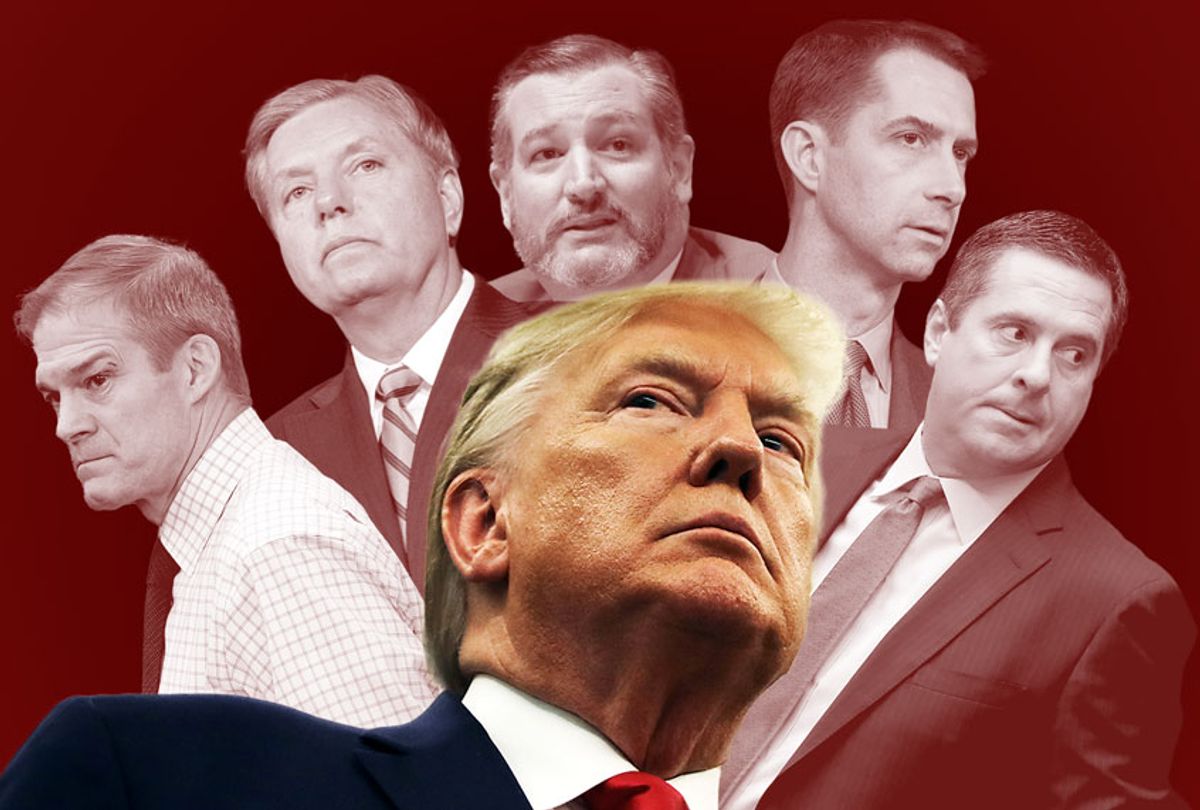 As Republicans love reminding us, in tones that often suggest they feel this outcome is tragic, Donald Trump never fully consummated his extortion plot against Ukrainian President Volodymyr Zelensky. This was because Trump, much like convicted rapist Brock Turner, was caught mid-act and therefore unable to bring his entire scheme to completion. And as with Turner's father grousing that his son only got "20 minutes of action," Trump's Republican defenders like House Minority Whip Steve Scalise, R-La., argue that because the conspiracy was unearthed before Zelensky gave in to Trump's blackmail, it doesn't really count as a crime to have blackmailed Zelensky in the first place.

Republicans sometimes seem to believe that Trump got cheated out of the very thing this criminal conspiracy set out to get, which was juicing up a bunch of lies about former Vice President Joe Biden, who leads the polls for the 2020 Democratic nomination. And so, in an especially disgusting twist, the Republican strategy for defending Trump appears to center on giving him the very thing he was trying to extract from Zelensky: Extensive media coverage of false allegations of corruption against Biden.

In fact, that's just one element of what appears to be the overall defense strategy of Trump, which is to get as many Republicans in Congress directly involved in the actual conspiracy that led to Trump's impeachment in the first place. Rather than trying to create any illusion of distance from Trump's behavior, Republicans are, en masse, becoming co-conspirators.

On Thursday, Sen. Lindsey Graham, R.-S.C., one of Trump's most audacious bootlickers in the Senate, sent a letter to Secretary of State Mike Pompeo demanding documentation of  Biden's communications with Ukrainian leaders during his time as Barack Obama's vice president. This move is clearly about giving Trump exactly what he hoped to get from Zelensky, using military aid and the promise of a White House visit as leverage: a show of support for Trump's conspiracy theory alleging that Biden got a Ukrainian prosecutor fired to prevent that prosecutor from investigating Burisma, a company that employed Hunter Biden, the veep's son, as a board member.

Graham's document request is almost certain to result in nothing scandalous. It's been well documented that Biden, working at the behest of a coalition of Western nations, was calling for the dismissal of that prosecutor for an entirely opposite reason — because he was failing to investigate corporate corruption. If anything, Biden's actions were meant to increase the likelihood that companies like Burisma came under scrutiny.

But as Graham knows, it doesn't actually matter what the documents show. The only thing that matters is getting the words "Burisma" and "Biden" into headlines. That comports with what impeachment testimony showed Trump wanted from Zelensky, which wasn't so much an actual investigation into Biden (which would have turned up nothing), but the announcement of such an investigation. The purpose was, and is to give low-information voters some buzzy headlines that help create the illusion that there is something to these Biden-Burisma conspiracy theories.

This is part of a larger tactic of Republicans to defend Trump by giving him exactly what the Ukrainian leadership narrowly evaded giving him. As anyone who watched last week's impeachment hearings knows, House Intelligence ranking member Devin Nunes, R-Calif., along with other Republicans on the committee, have spent most of their time asking nonsense questions — questions that often confuse the witnesses, because they have nothing to do with the matters at hand, but are loaded with buzzwords that reference the very conspiracy theories Trump was trying to force Zelensky to support.

None of this makes sense in real time, but, as Ryan Broderick at BuzzFeed News reports, clips of Republicans asking these nonsense questions are edited together after the fact into videos and "flipped into Fox News segments, shared as bite-size Facebook posts, or dropped into 4chan threads." The underlying premise is that Trump's conspiracy theories falsely accusing Biden of corruption, or falsely claiming that Ukraine interfered with the 2016 election on Hillary Clinton's behalf, can be used to motivate Trump's base and depress turnout among likely Democratic voters.

This deviousness, it appears, may only be the tip of the iceberg. In fact, congressional Republicans are now directly implicated in the very conspiracy that has led to the impeachment inquiry of Trump.

Over the weekend, it was reported that Lev Parnas,  one of the shady characters who worked with Trump's lawyer, Rudy Giuliani, in Ukraine, is now claiming that Nunes was in on it. Parnas, who has been indicted for charges related to campaign finance fraud, says that Nunes had a meeting with former Ukrainian prosecutor Viktor Shokin — the same guy Joe Biden got fired — who, for obvious reasons, is pushing false claims that he was targeted for corrupt reasons, when the evidence strongly suggests otherwise.

Nunes has more or less denied this, although not all that clearly or specifically. Anyway, he has no credibility on this question. During the impeachment hearings, Nunes has eagerly and actively bolstered Trump's asinine conspiracy theories, which is exactly why he might have wanted to meet Shokin.

Of course, a huge part of any criminal conspiracy is the cover-up, which Trump slid right into the second that there was a hint that his efforts to extort Ukrainian leadership were about to be exposed. Luckily for him, it appears that huge numbers of Republicans are willing to go way past just trying to defend him and into a straight-up conspiracy aiming to rig the impeachment process in the president's favor.

Over the weekend, it was reported that the White House hosted a meeting with Republican senators — including Graham, Mike Lee of Utah, Ron Johnson of Wisconsin, Ted Cruz of Texas, Tom Cotton of Arkansas and John Kennedy of Louisiana — literally so they could literally work with Trump on strategy for an impending impeachment trial.

Hilariously, many Republican senators, when asked about impeachment, have avoided comment by making claims that they need to remain impartial because they will serve as jurors for such a trial. But these models of impartiality think nothing of working with the defendant on a strategy to justify the predetermined outcome.

The favor-buying is right out in the open. As the Washington Post has put it, Trump is using Camp David, a taxpayer-funded presidential retreat, as what a "playground" for Republican congressmen to. Using your money and mine, Trump is treating these supposed representatives of the people to a luxury vacation, and then leaning on them to help him escape accountability for his criminal behavior.

This goes beyond Trump's previously reported antics of using fundraising support to manipulate Republicans into supporting him. This is the spectacle of numerous elected Republicans choosing, with no apparent concern for optics, to conspire with Trump to thwart justice.

Trump is often treated like an outlier, a man who is violating all the norms and laws and customs that supposedly defined Capitol Hill. That belief doesn't square with the fact that, at this point, pretty much every elected Republican in D.C., along with their entire staffs, isn't just tolerating Trump's Ukraine conspiracy but is actively participating in it. This is leading to a surreal situation where the very institutions that are supposed to work as a check on Trump's crime and corruption are, in fact, thick with co-conspirators. In the case of the Senate, it's fair to say that the institution is run by the president's co-conspirators.

In the face of that, it is impossible for anything resembling justice to happen. The only question now is whether the American public will see this and understand it, or whether the truth — that one of our two major political parties is in on the crimes — is too big and ugly to accept.