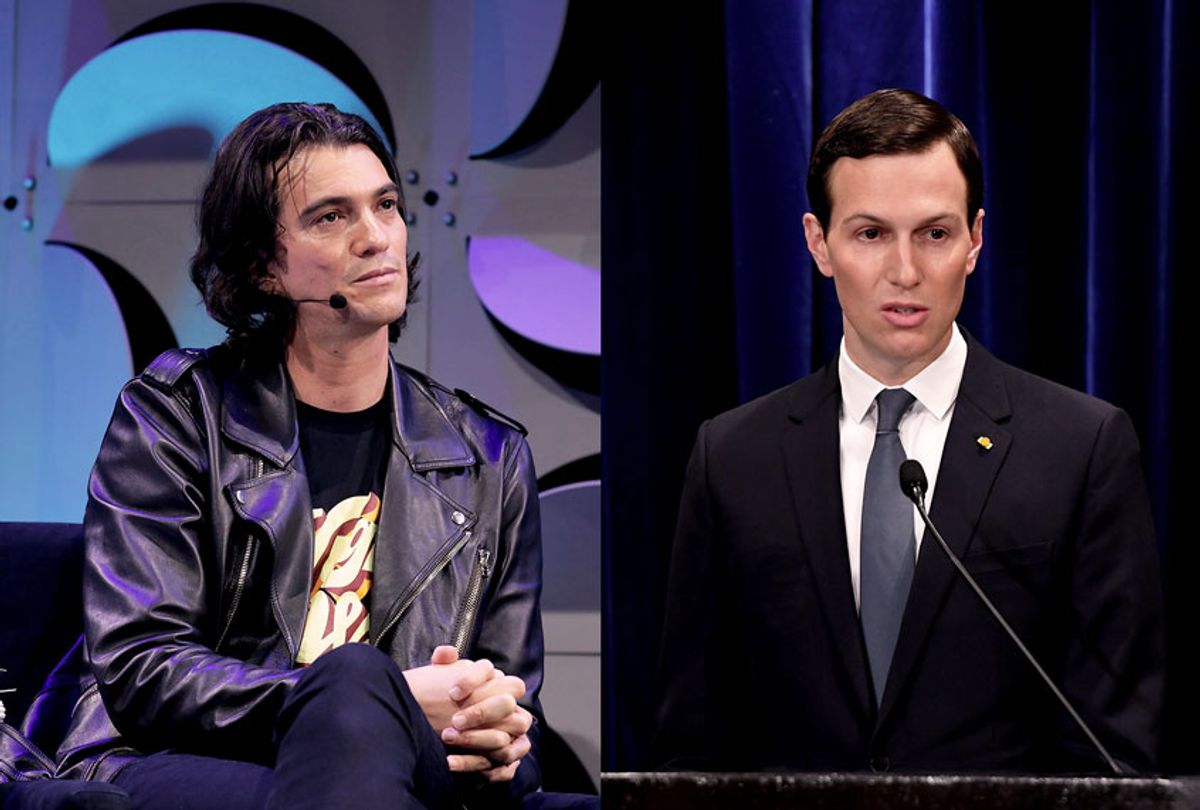 Neumann, a college dropout who built WeWork into a company valued by investors at $47 billion ($10 billion more than the auto giant Ford), was ousted earlier this year with a $1.7 billion golden parachute after the company faced bankruptcy when its valuation plummeted by $40 billion. (Neumann reportedly cast the deciding vote against himself.) In a report titled “The Fall of WeWork,” Sherman detailed Neumann’s habit of declaring that he wanted to be “elected president of the world” and become humanity’s first trillionaire while spending millions of the company’s money on “vanity projects” like a wave-pool company. Sources told Sherman that Neumann’s “egomaniacal glamour and millennial mysticism” led Neumann to believe that he could solve “the world’s thorniest problems,” like Middle East peace.

WeWork executives were “shocked” to learn that Neumann, who was born and raised on an Israeli settlement near the Gaza Strip, was working on Kushner’s Middle East peace plan last summer, two sources told Sherman. Neumann tasked Roni Bahar, WeWork’s director of development, with finding a company to produce a “slick video” for Kushner to show what the West Bank and Gaza would look like after the economic transformation that would purportedly be brought upon by the plan.

Kushner showed a version of the video during a speech at the White House’s peace conference in Bahrain last year.

Neumann bragged to associates that he, Kushner, and Saudi Crown Prince Mohammed bin Salman would “save the world,” sources told the outlet. After U.S. intelligence concluded that bin Salman likely ordered the murder and dismemberment of Washington Post journalist Jamal Khashoggi, Neumann told former George W. Bush national security adviser Stephen Hadley that “everything could be worked out if bin Salman had the right mentor,” Sherman reported.

When a confused Hadley asked Neumann who he had in mind, Neumann replied, “Me.”

“When Adam got in front of world leaders, it was like he started thinking he was one,” a former WeWork executive told Sherman, which led to him “discussing the Syrian refugee crisis with Canadian Prime Minister Justin Trudeau and urban planning with London Mayor Sadiq Khan.”

Since his time dabbling in foreign policy, Neumann has come under fire after WeWork announced that it would lay off 2,400 employees while allowing its founder, who brought the company to the brink of complete failure, walked away with nearly $2 billion. Sen. Elizabeth Warren, D-Mass., called Neumann’s golden parachute “another example of a rigged and corrupt system.”

Business Insider previously reported that Neumann has long maintained a “close relationship” with Kushner and his wife, Ivanka Trump. WeWork is a major tenant of Kushner’s real estate company and The New York Times reported that a negotiation over real estate between the two was once settled with a tequila-fueled arm wrestling match which Kushner lost.

Neumann praised Kushner as a mentor to Bloomberg Businessweek in 2016.

“Many times when I’m with Jared, I take cues from his behavior just to learn how to act,” Neumann said at the time.

Kushner’s own career, like Neumann’s, has been marked with failure as much as success. At Kushner’s direction, his family’s company bought a building at 666 Fifth Ave. in Manhattan for a record $1.8 billion before getting a bailout from a Canadian firm on their $1.4 billion mortgage after losing millions and to court international investors in China and the Middle East, which came under scrutiny from former special counsel Robert Mueller. In 2015, the company bought part of a Times Square building for nearly $300 million, which Bloomberg News described four years later as a “toxic brew of debt, conflict, and vacancies” that has “put their investment in jeopardy.” Kushner’s company also currently faces legal action over thousands of alleged violations at its rat-infested Baltimore housing units where residents have complained of strong-arm collection tactics and unlivable conditions.

Despite a long string of business failures, Kushner was tasked by the president, who similarly left a trail of bankruptcies and defaults in his real estate career, to oversee everything from solving the opioid epidemic to diplomacy with China and Mexico to reforming the justice system, the Department of Veterans Affairs, and the entire federal government, along with his mandate to deliver Middle East peace.

Kushner rolled out the economic component of his plan in June, which would create a $50 billion fund to be invested by the Palestinian Authority, though it remains unclear where the money would come from. The plan was immediately rejected by Palestinian leaders and widely panned by U.S. foreign policy experts. Michael Koplow, the policy director of the Israel Policy Forum, described Kushner’s plan as a “Monty Python sketch of Israel-Palestinian peace initiatives.” Daniel Kurtzer, George W. Bush’s ambassador to Israel, said he would give “this so-called plan a C- from an undergraduate student.”

“The authors of the plan clearly understand nothing,” he said.

Kushner’s previous partner on the Middle East peace plan was Jason Greenblatt, whose experience is limited to two decades as a lawyer for the Trump Organization. Axios reported in September that Greenblatt’s responsibilities would be taken over by Avi Berkowitz, a 29-year-old recent Harvard graduate and a personal friend of Kushner’s who former White House official Hope Hicks said had been mostly responsible for “assisting Kushner with daily logistics like getting coffee or coordinating meetings.”

“If Avi Berkowitz is [Greenblatt’s] replacement it’s a considerable downgrade in the position. He’s Kushner’s 29-year-old assistant,” Indyk wrote. “Nice guy but does not have the weight or experience of Trump’s former real estate lawyer.”