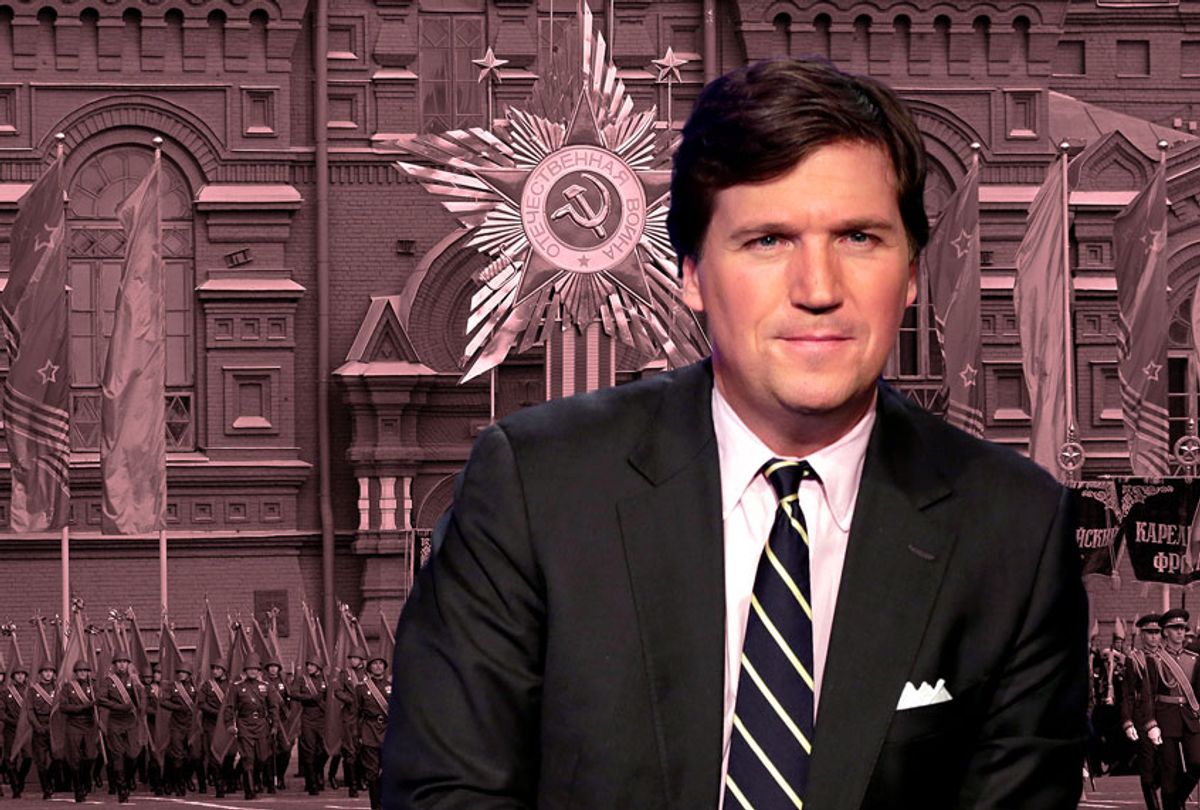 Tucker Carlson told viewers that he was rooting for Russia in its conflict with Ukraine during the Monday broadcast of his Fox News primetime program, a remark which he subsequently clarified by claiming that he was “joking.”

The segment in question began with Carlson talking with Richard Goodstein, a former adviser to the Democratic presidential candidate Hillary Clinton, about the impeachment inquiry hearings which were prompted by President Donald Trump’s move to solicit Ukraine to investigate one of the president’s political rivals, former Vice President Joe Biden.

“Isn’t it a little weird that here you have Joe Biden’s ne’er do well son using his father’s position to make a million dollars here in a business he knows nothing about? Trump is being impeached for asking about it. Do you think that’s a little bit weird?” Carlson asked Goodstein.

Goodstein replied by saying that the notes on Trump’s July 25 call to Ukrainian President Volodymyr Zelensky did not mention “corruption” and that Trump had only asked for an announcement rather than an investigation, because he did not care about the substance of the matter.

“We do care about the substance of it. And the substance of it is that Trump, for all of his sins — and I'll concede some of them — has never taken close to a million dollars a year from a Ukrainian energy company to do nothing because his dad is the vice president,” Carlson said. “So Hunter Biden did. Now I know Hunter Biden. I actually like Hunter Biden, but that's totally corrupt — and you know it. Why is it worse to ask about it than do it?”

After Goodstein responded by saying that “people are dying on the front lines” because of the Russia-Ukraine conflict, Carlson asked: “Why do I care? Why do I care what's going on in the conflict between Ukraine and Russia?”

The Fox News host later elaborated, “Why should I root for Ukraine against Russia? I’m totally — I’m sincerely confused. Why shouldn’t I root for Russia against Ukraine or Latvia against Moldova? Why should I care at all?”

At the close of his broadcast, Carlson addressed his earlier remarks by claiming that he was “joking,” was “only rooting for America” and was “mocking the obsession many on the left have. Ha!” He also told Fox News host Sean Hannity in the pair’s handover that “I rooted against Russia when it mattered, by the way.”

Meghan McCain, a co-host of the ABC talk show “The View,” was one of several conservatives who tweeted strong disagreement with Carlson’s remarks.

“‘Why shouldn’t I root for Russia?’ is truly and utterly some next level shit propaganda.... and a totally abhorrent thing to say,” McCain wrote. “Also I’ll make the answer idiot proof. Just google Oleg Sentsov.” (Sentsov is a Ukrainian filmmaker who was arrested by the Russian government after it annexed Crimea on charges which Amnesty International described as fabricated.)

“It’s comments like this from @TuckerCarlson that make me wonder who my friends are and who my enemies are – it makes me wonder whether the world has gone insane,” Frank Luntz tweeted. “I know who I support; Ukraine is an imperfect ally but Russia is a perfect enemy.”

This is not the first time that Carlson has questioned the idea that America should be concerned about Russia. He speculated earlier this month that the underlying reason for the impeachment inquiry was that Democrats and State Department officials had disagreed with the president’s desire for a closer relationship between the U.S. and Russia. During that segment, Carlson made the false claim that “Russia poses no threat to the United States at all,” even though former special counsel Robert Mueller concluded in his report that the Russian government had engaged in “multiple, systematic efforts to interfere in our election."

Ambassador Michael McFaul, who served as President Barack Obama’s representative to Russia from 2012 to 2014, told Salon earlier this year that Russian President Vladimir Putin wants to create an “illiberal international” analogous to the Communist International created by his predecessor Vladimir Lenin a century ago.

“Lenin and his comrades created the Communist International. I do think Putin is leading something akin to an Illiberal International, not only in our country, but trying to find like-minded individuals, and movements and parties first and foremost, in Europe, in the United States and he's investing in those relationships,” McFaul told Salon.

Carlson has also attacked many of the witnesses who have testified before Congress about Trump’s behavior toward Ukraine, which some of them felt was inappropriate. One of them, Lt. Col. Alexander Vindman, was accused by Carlson of having dual loyalties between the United States and Ukraine. (Vindman is Jewish, and the anti-Semitic canard of “dual loyalties” have plagued Jews since the days of the Dreyfus Affair.)

Carlson denied last week to Salon that he intended to play on anti-Semitism in his comments about Vindman. When asked on Tuesday about what Carlson meant when he said that he rooted against Russia "when it mattered," Fox News offered Salon no further comment.