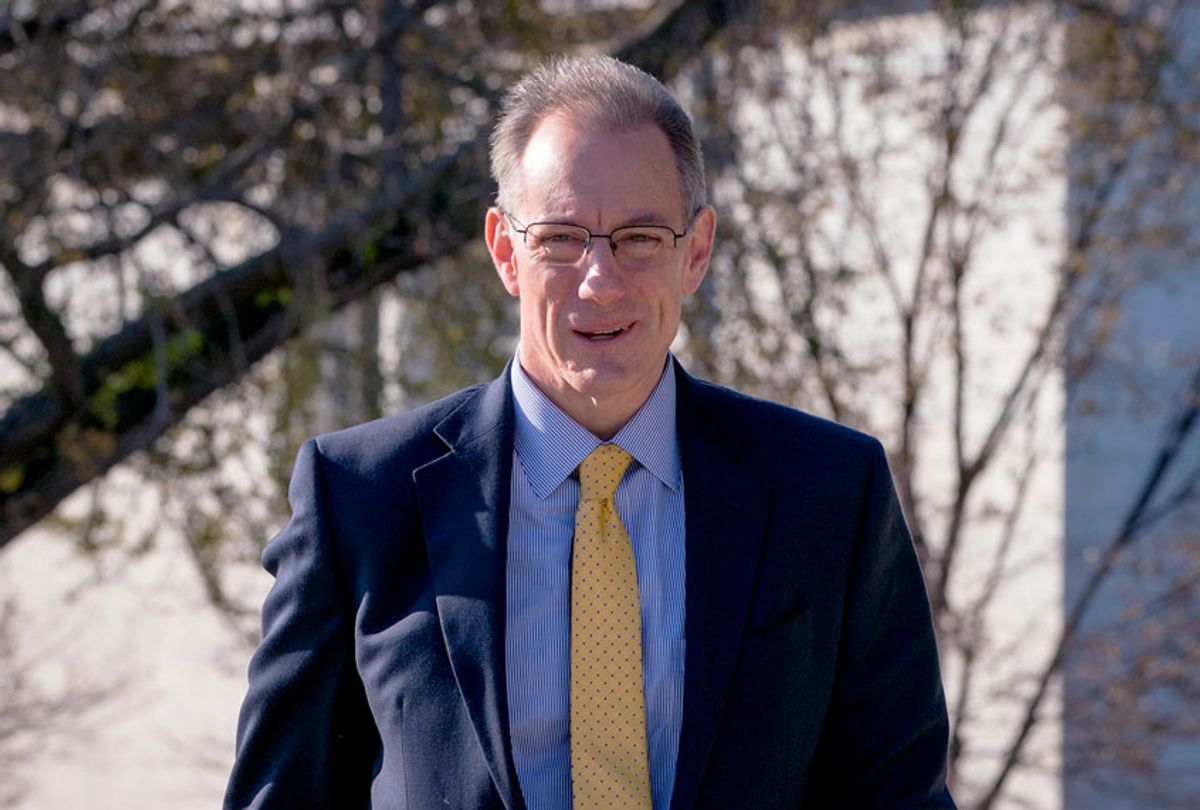 Mark Sandy, a senior career official at the Office of Management and Budget, arrives to the US Capitol for a closed door deposition with lawmakers regarding whether President Donald Trump ordered a hold on military assistance to Ukraine on November 16, 2019 in Washington, DC. (Sarah Silbiger/Getty Images)
--

Mark Sandy, a top career official in the White House Office of Management and Budget (OMB), told impeachment investigators that it was his understanding that President Donald Trump directed the relevant agencies to hold up military aid to Ukraine over the summer, according to a transcript of his testimony released Tuesday.

Sandy, the only OMB official to testify in the inquiry, said that he learned of the president's decision to freeze the aid through a July 12 email from Robert Blair, a top aide to acting White House chief of staff Mick Mulvaney. The email, Sandy added, was sent to Michael Duffey, a political appointee.

On July 17 or 18, Duffey asked Blair about the reasoning behind the hold but did not receive an explanation, according to Sandy's remarks.

"He didn't provide an explicit response on the question. He simply said, 'We need to let the hold take place' — and I'm paraphrasing here — 'and then revisit this issue with the president,'" Sandy said of Blair, adding that he immediately raised concerns about whether the hold was legal when he first learned of it. "On that day, I emphasized that that would raise a number of questions that we would need to address. And so I advised that we would want to consult with our general counsel on those questions first."

Duffey ultimately took over the process of signing off on the documents that held up the Ukraine aid. Sandy told impeachment investigators that until then, Duffey had not expressed interest in the process of approving apportionments.

Sandy said that his own staff was "curious" and "concerned" about the apportionment authority being removed from him and that he was not aware of such a step happening before. He told lawmakers that Duffey said he took over responsibilities because of "interest among the leadership in tracking the issues of moneys closely" and wanted to "learn about more specific accounts within his area." Sandy said he voiced concerns to Duffey about the move. He thought there were better ways to do this, but he ultimately "took him at his word."

Duffey defied a congressional subpoena to testify in the impeachment inquiry.

Sandy, the agency's deputy associate director for national security programs, testified on Nov. 16 behind closed doors before the House Intelligence Committee, one of the panels leading the investigation.

He told lawmakers that officials at the Pentagon were concerned about the aid freeze, as well. Early internal paperwork on the freeze included a footnote that stated, "OMB understands from the Department (of Defense) that this brief pause in obligations will not preclude DOD's timely execution of the final policy direction," but that footnote was removed in late August, Sandy testified.

"DOD stated it could no longer support that sentence," Sandy said. "They were concerned about execution risk associated with an ongoing hold," worried it could lead to a violation of the Impoundment Control Act, he added.

Sandy said he was not given any reason for the freeze until September — after news of the hold had become public, prompting bipartisan pushback from Congress. At the time, Sandy learned that Trump was concerned about "other countries not contributing more to Ukraine."

He also testified that two officials at the budget office stepped down this year because of their concerns about Trump's decision to hold up the aid to Ukraine.

Sandy did not name the employees in question. He said one worked in the OMB legal department and stepped down over concerns that withholding some $400 million in security assistance to Ukraine, which had already been approved by legislators, could violate the Impoundment Control Act of 1974, which curbs the executive branch's authority to change spending decisions made by Congress.

Sandy was asked specifically whether the official who worked in the OMB's legal office quit "at least in part because of their concerns or frustrations about the hold on Ukraine's security assistance." He answered, "Yes, in terms of that process, in part."

He added that the "best way to characterize" the legal office staffer's concern "would be a dissenting opinion vis-a-vis the Impoundment Control Act." Sandy said the official did not agree with the position of the OMB's general counsel that withholding the money was legal.

Sandy also testified that another staffer, whose name was also undisclosed but did not work in OMB's legal division, also left the agency in September after noting concerns over the aid freeze.

"Yes, this individual did express frustrations," Sandy told lawmakers, later adding: "He expressed some frustrations about not understanding the reason for the hold."

Current and former government officials have testified in the impeachment inquiry that they were alarmed about the administration's decision to withhold the funds, with some expressing concern that Trump was trying to coerce Ukraine for his own political benefit. Trump has repeatedly denied wrongdoing and dismissed the investigation as a "hoax."

Sandy's testimony is the first public confirmation that the clash at the OMB regarding the release of the Ukraine aid contributed to resignations from the agency.

House Democrats in September launched an impeachment inquiry into Trump's actions over the summer, alleging that he sought to leverage security funding and a potential White House meeting in an effort to pressure Ukraine's newly-elected leader, Volodymyr Zelensky, to launch investigations that would implicate Trump's domestic political rivals and boost his re-election efforts. They have argued that Trump's communications with his Ukrainian counterpart amount to a "quid pro quo."

House Democrats also in September announced that they were investigating alleged efforts by Trump and his personal lawyer, Rudy Giuliani, to pressure Zelensky to investigate former Vice President Joe Biden, one of the frontrunners for the Democratic presidential nomination, and his son, Hunter Biden.

Sandy's testimony was released as House Democrats on Tuesday moved forward in their impeachment inquiry into the president's actions, with the House Judiciary Committee scheduling its first hearing for Dec. 4 and the House Budget Committee releasing a report alleging that the White House broke the law when it withheld money from Ukraine.

Democrats have tried to outline a timeline of events related to the White House's decision to withhold the aid from Ukraine. The House Budget Committee on Tuesday alleged in a report that the OMB engaged in a "pattern of abuse" of its authority and the law in withholding the aid to Ukraine.

In findings based on documents turned over by the OMB, the Democratic-led House Budget Committee details the unusual steps the agency took over the summer as it moved to hold up millions in State Department and Pentagon funds for Ukraine which had already been approved by Congress, including several discussed by Sandy in his testimony to impeachment investigators.

These included putting Duffey in charge of signing off on withholding $250 million in funds for Ukraine on the evening of July 25, just hours after Trump spoke on the phone with Zelensky and requested he open investigations that could help him win a second term in 2020.

OMB issued several short-term withholdings of Ukraine aid in August and September. Some of funds were released on Sept. 11, after lawmakers were alerted to the existence of a whistleblower complaint detailing concerns over Trump's mid-July call with Zelensky. The remainder of the funds were reportedly released Sept. 27 and Sept. 30 — the last day of the fiscal year.

"After careful review of the materials provided to the committees, the chairs have become more concerned that the apportionment process has been abused to undermine Congress’ constitutional power of the purse," the committee said in its report.