"We don’t ban the rich from public schools, firefighters, or libraries [because] they are public goods," AOC says 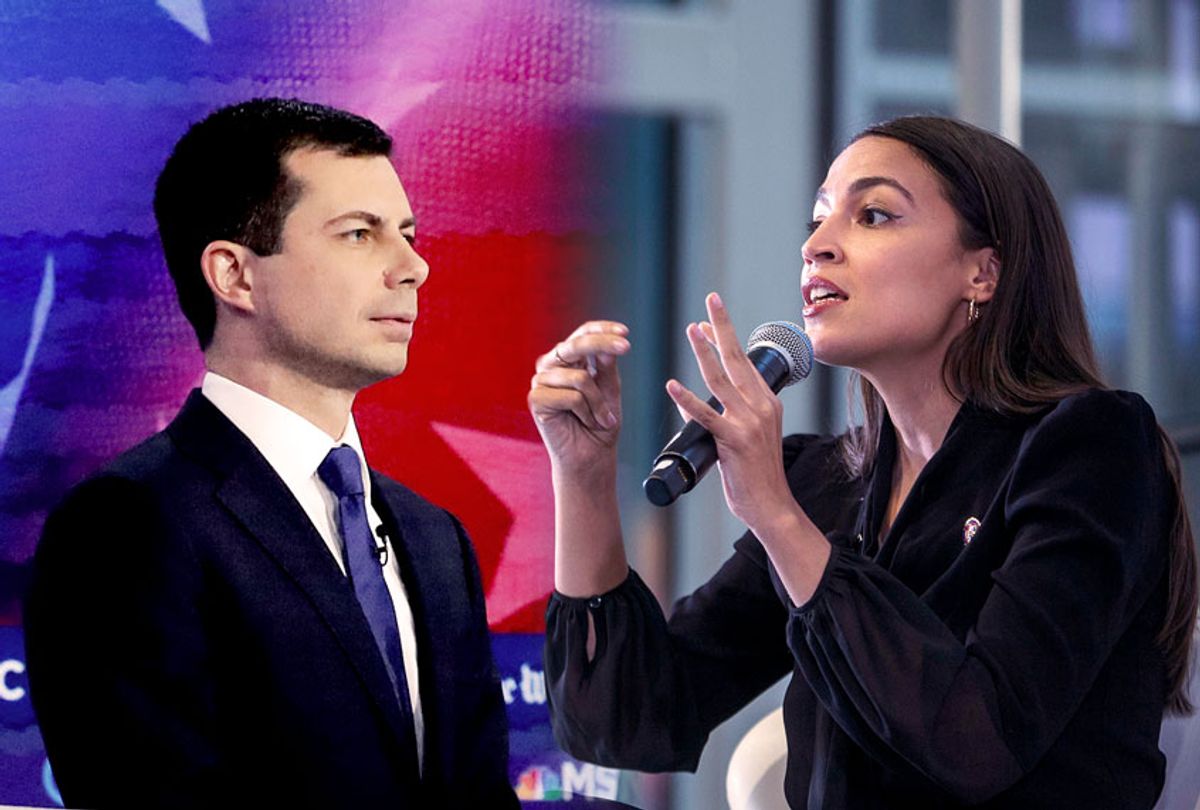 Buttigieg, who has positioned himself as a centrist alternative to progressive candidates on issues like health care and education, launched a new campaign ad in Iowa taking aim at the tuition-free college proposals.

“I believe we should move to make college affordable for everybody,” Buttigieg says in the ad. “There are some voices saying, ‘Well, that doesn’t count unless you go even further, unless it’s free even for the kids of millionaires.’”

“But I only want to make promises that we can keep,” he added. “Look, what I’m proposing is plenty bold. I mean, these are big ideas. We can gather the majority to drive those big ideas through without turning off half the country before we even get into office.”

Ocasio-Cortez, who has endorsed Sanders in the primary, slammed Buttigieg’s argument as a “GOP talking point," which she said she was “sad” to see a Democratic candidate adopt.

“Just like rich kids can attend public school, they should be able to attend tuition-free public college,” she wrote on Twitter. “Universal public systems are designed to benefit EVERYBODY! Everyone contributes & everyone enjoys. We don’t ban the rich from public schools, firefighters, or libraries bc they are public goods.”

The New York congresswoman argued that universal systems “benefit everyone,” because “everyone’s invested.” When you “start carving people out” and add "asterisks to who can benefit from goods that should be available to all," she wrote, “cracks in the system develop.”

“Many children of the elite want to go to private, Ivyesque schools anyway, which aren’t covered by tuition-free public college,” Ocasio-Cortez added. “Lastly, and I can’t believe we have to remind people of this, but it’s GOOD to have classrooms (from pre-k through college!) to be socioeconomically integrated. Having students from different incomes & backgrounds in the same classroom is good for society & economic mobility.”

“To have an advanced society that lifts the working class, you need universal benefits paid for through progressive taxation,” he tweeted. “Why does Pete dislike Social Security, Medicare, public parks, libraries, fire stations, etc.?”

Buttigieg’s position is the same one that former Secretary of State Hillary Clinton took during her 2016 primary run.

“I disagree with free college for everybody,” Clinton said during a debate with Sanders. "I don’t think taxpayers should be paying to send Donald Trump’s kids to college."

Buttigieg's campaign fired back at critics.

"If you think that a worker who didn’t go to college should pay for college for a CEO’s kid, then [Pete Buttigieg]
isn’t your candidate," wrote Lis Smith, a senior adviser to Buttigieg.

"Pete would make public college tuition-free for 80% of families. And he’d provide tuition assistance for the next 10% of families," added Sean Savett, a spokesman for the campaign. "But some say he’s not progressive because he won’t make college free for millionaires + billionaires who already have advantages?"

Buttigieg has long been criticized by progressives for pushing means testing for programs like public education, which the socialist magazine Jacobin described as a policy “cherished by moderates in the Democratic Party.”

“Democrats’ attraction to means testing is not rooted in a firm commitment to maximum equality,” wrote Jacobin’s Meagan Day. “Plainly put, they like means testing because targeted social programs cost less public money than universal social programs. Means testing allows them to limit taxes on their ruling-class donor base while still superficially appeasing their working-class voter base. Means testing is an expression of establishment Democrats’ timid middle-ground politics, and their opposition to free college is no different.”

Sparky Abraham, the editor of Current Affairs who wrote a response to the criticism of tuition-free college in the spring, slammed Buttigieg’s proposal by pointing out the “burdens land on poor people to prove they’re poor, and colleges don’t lose market share or profit to public competitors.”

“This is pure profit protection at your expense,” he wrote.