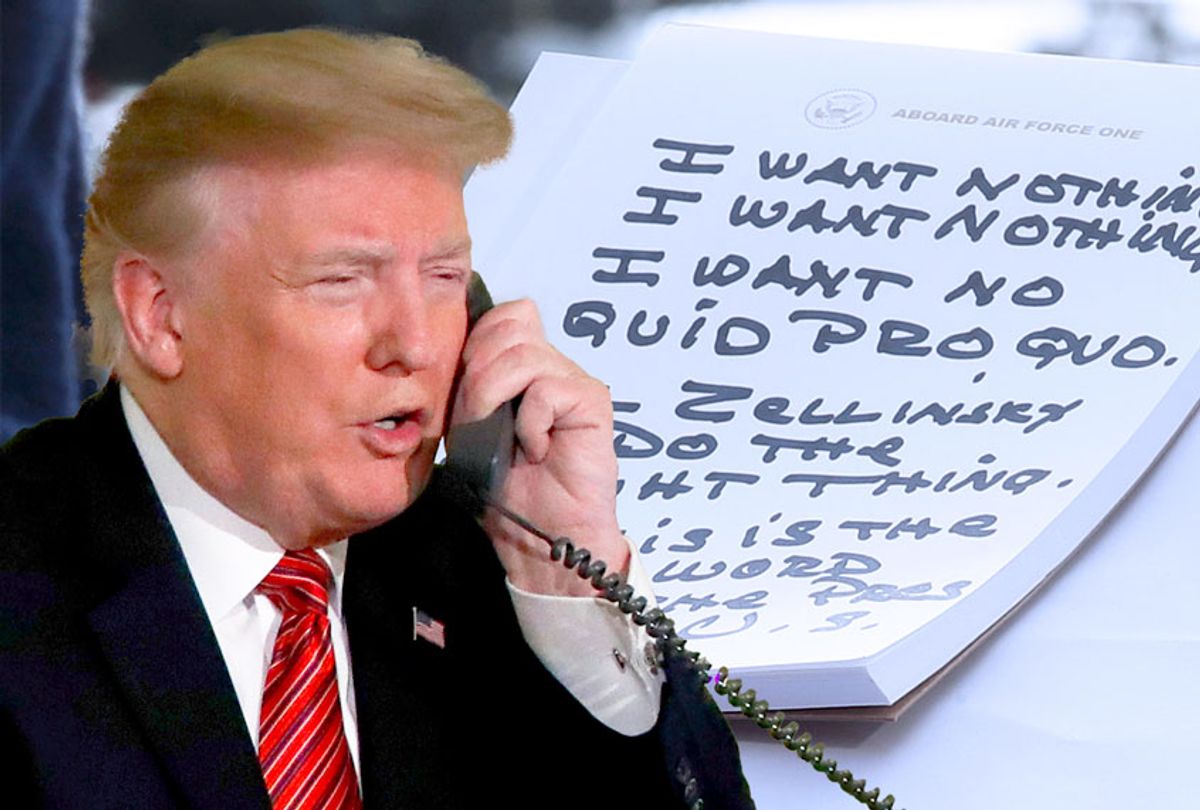 The White House appears to be unable to locate any record of the phone call that President Donald Trump has claimed vindicates him in the Ukraine scandal.

Gordon Sondland, the U.S. ambassador to the European Union, testified to Congress that acting Ukraine Ambassador Bill Taylor confronted him in a text message exchange about the alleged campaign to pressure Ukraine to investigate former Vice President Joe Biden while blocking military aid appropriated by Congress to the country. Taylor told Sondland that it would be “crazy to withhold security assistance for help with a political campaign.”

Sondland told the House Intelligence Committee that he phoned Trump after the exchange.

“I just said: ‘What do you want from Ukraine?’ I may have even used a four-letter word. And he said, ‘I want nothing. I want no quid pro quo,’” Sondland testified as he claimed that the administration did, in fact, seek a “quid pro quo” with Ukraine.

Ignoring the rest of Sondland’s damning testimony, Trump told reporters in front of the White House that the testimony had fully vindicated him.

“Here’s my response that he just gave: ‘I want nothing . . . I want nothing. I want no quid pro quo,’” Trump said. “I would say that means it’s all over. Just happened, to which I turned off the television.”

The call, Sondland said at his closed-door deposition, took place on Sept. 9. But there is no evidence to corroborate that the call did take place, The Washington Post reported.

The White House has reportedly not been able to locate any record in its switchboard logs of a call between Trump and the ambassador on that day, and no other witness testimony or documents show that there was a call between the two on Sept. 9.

There is, however, evidence of a call between Trump and Sondland that took place a few days earlier, on which Trump made clear that he wanted Ukrainian President Volodymyr Zelensky to publicly announce investigations into Biden.

The Post noted that Trump’s account of the call is undercut by the fact that it came after he was already briefed on the whistleblower complaint that detailed the president's move to solicit Zelensky to interview his political rival. By the time the alleged call took place, Trump was already under pressure from even Republicans in Congress to release the aid after the freeze was reported by Politico.

Other administration witnesses described a very different call that took place on Sept. 7.

Former National Security Council official Tim Morrison testified that Sondland described the Sept. 7 call to him, on which he said Trump demanded that Zelensky personally announce the investigation. Morrison and Taylor both testified that the call made them uneasy. Morrison added that he was so concerned about Sondland’s account that he reported it to White House lawyers.

Sondland did not disclose that conversation during his closed-door deposition in October but submitted a revised testimony after Taylor and Morrison provided their accounts.

“To the extent that the recollections of various witnesses differ in some respects, we leave to the committee the task of reconciling those differences,” Sondland attorney Robert Luskin told The Post.

Sondland’s account of the call has continued to evolve. Sondland said at his closed-door deposition that Trump said “no quid pro quo” before urging Zelensky to both “do the right thing” and “do what he ran on.” Sondland claimed that he did not know what the president was referring to; however, following Morrison and Taylor’s testimony, he acknowledged that he had shared with Ukrainian officials after the call that he believed security aid was conditioned on the announcement of the investigations.

He added that he could not “specifically recall if I had one or two phone calls with President Trump in the Sept. 6-9 time frame.” Sondland did not mention the call in his opening statement when he testified publicly earlier this month.

Pressed on the call, Sondland said: “I believe it was on the ninth of September. I can’t find the records, and they won’t provide them to me.”

“I still cannot find a record of that call, because the State Department or the White House cannot locate it,” he later added. “But I’m pretty sure I had the call on that day.”

Text messages submitted to the committee by former special Ukraine envoy Kurt Volker show that Taylor confronted Sondland at about 12:47 a.m. on Sept. 9, and Sondland relayed Trump’s “no quid pro quo” message at around 5:19 a.m. that day. Though it is possible that the call was made to Trump’s personal cellphone, which is not always logged by the White House, a West Wing official told The Post that Sondland did not have the president’s personal number at the time. The official added that other calls from Sondland were logged by the White House.

If Sondland mistook the Sept. 9 call for the Sept. 7 call, the takeaway would be very different than what Trump shared with reporters.

Morrison testified that Sondland told him that the “president said there was not a quid pro quo." However, he noted that Sondland “further stated that President Zelensky should want to go to the microphone and announce personally . . . that he would open the investigation.”

Morrison said he also told Taylor about his concerns.

Taylor testified that Sondland told him personally the following day that Trump was “adamant” that Zelensky had to “clear things up and do it in public.”