Trump's "I want nothing!" defense was always stupid. Now it just went down in flames 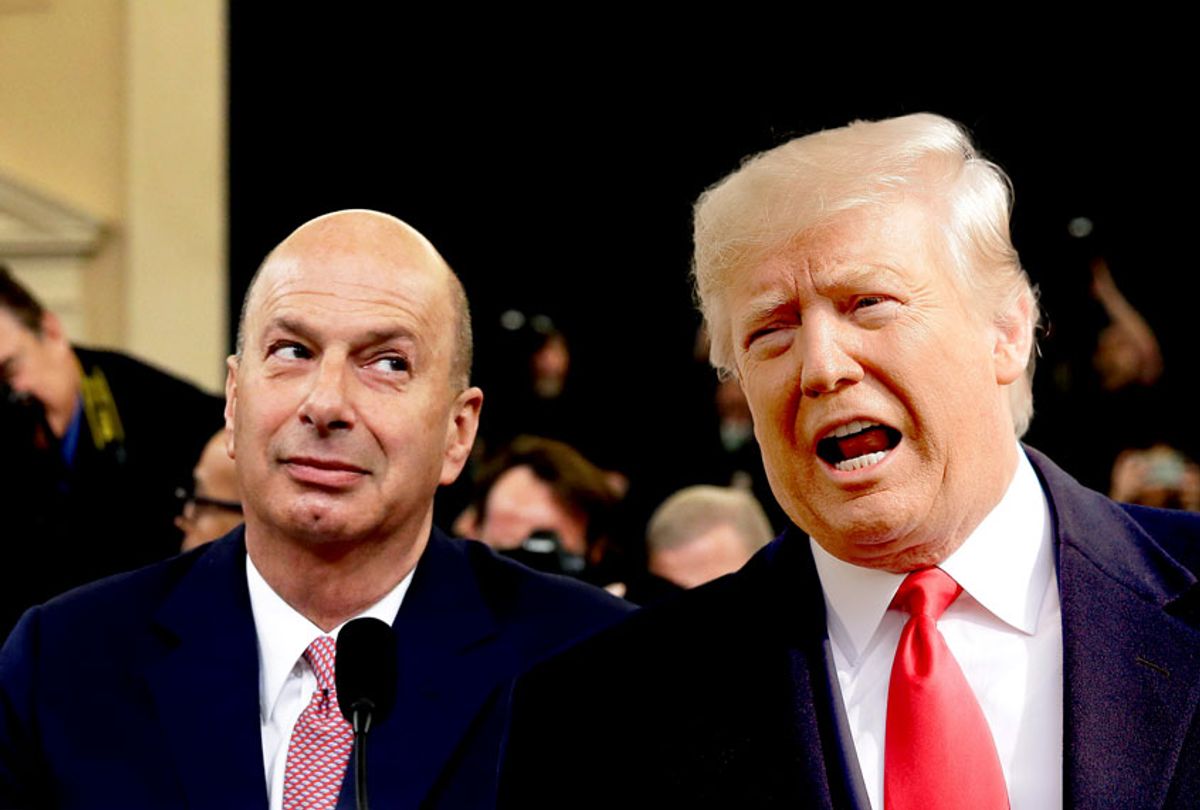 There’s a myth going around that says goldfish only have memories lasting three seconds. The myth was busted long ago, with studies showing goldfish memories last closer to five months. But as we observe Donald Trump’s defense strategy against impeachment, he appears to believe his supporters possess even shorter memories than the mythical fish.

As more and more evidence of impeachable high crimes stack up against Donald Trump, his best defense strategy appears to rest on the assumption that his supporters can only remember one thing at a time.

Consequently, Trump's desperate blurts in self-defense are invariably compartmentalized to whatever that one thing happens to be, usually whichever news item is in front of him at that very moment. None of his incoherent attempts at self-acquittal help him out of any other pickle beyond that one most recent item. Nothing else that happened before that particular piece of news matters to his defense, and his Red Hats don’t seem to remember anything else anyway.

Trump doesn’t have a counter-narrative to prove his innocence, just a random series of individual “look at” remarks (e.g.: Look at the transcript! Look at Hillary’s server!). Nothing connects to anything else. It’s a defense designed for people with extremely brief short-term memories.

Here’s an example of what I’m talking about.

Even though it was a billion news cycles ago, we all remember one of the more confounding editions of what Stephen Colbert calls “chopper talk” in which Trump whipped out handwritten notes based on the public impeachment testimony of EU ambassador Gordon Sondland, a Ned “The Head” Ryerson lookalike. During his public testimony, Sondland told members of Congress that Trump had spoken with him early in the morning on Sept. 9. During the call, the president instructed Sondland there was “no quid pro quo” while repeatedly screeching the exclamation, “I want nothing! I want nothing!”

As Trump read from his notes, he insisted Sondland’s testimony about the call proved his innocence, that he hadn't sought to extort election interference from Ukraine in exchange for military aid. (Incidentally, the president misspelled the name “Zelensky” in his handwritten notes. He appears to be the only human on the planet who thinks there are two L's in the Ukrainian leader’s last name.) In keeping with his standard approach, Trump assumed his supporters weren’t savvy enough to understand anything that happened before or after this incident; details that rendered the “I want nothing!” blurt far less helpful to his cause, if not completely irrelevant.

Mainly, we learned over the Thanksgiving holiday that the call didn’t take place on Sept. 9 after all. Sondland was wrong.

Based on the ambassador’s original testimony, the “I want nothing!” call occurred on Sept. 9, within a five-hour window after Bill Taylor, the senior U.S. diplomat in Kyiv, texted Sondland that it’d be “crazy to withhold security assistance for help with a political campaign.” Sometime before the next and final text message, Sondland testified he spoke to Trump and received the “I want nothing!” instructions. After speaking with Trump, Sondland replied to Taylor’s “crazy” text message, writing, “Bill, I believe you are incorrect about President Trump’s intentions. The President has been crystal clear no quid pro quos of any kind ... I suggest we stop the back and forth by text.”

But it turns out that Sept. 9 call quite likely did not take place.

No other witnesses have testified about any Sept. 9 call, but former National Security Council official Tim Morrison testified that Sondland had told him about a phone call with Trump two days earlier, on Sept. 7. During closed-door testimony, Morrison told investigators: “Gordon related that both — the President said there was not a quid pro quo, but he further stated that President Zelensky should want to go to the microphone and announce personally . . . that he would open the investigations.” In fact, when Morrison heard about the call, he was instructed to report it immediately to White House lawyers, which he did.

Either Sondland misremembered the date of the call, or he deliberately lied about it as part of Trump’s attempted cover-up. I mean, it’s also possible the repeated “I want nothing!” quotes were misremembered, too, even though “no quid pro quo” was confirmed by Morrison — as having been spoken by Trump two days earlier than Sondland’s recollection.

Making matters worse for Trump, Sondland confirmed to Congress Morrison’s details of the Sept. 7 call after being reminded of it by House Intelligence Committee Chair Adam Schiff.

Schiff: Mr. Morrison and Ambassador Taylor have also related a conversation you had with the president . . . in which the president relayed to you that there was no quid pro quo but, nevertheless, unless Zelensky went to the mic and announced these investigations, there would be a stalemate over the aid. Is that correct?

The call between Trump and Sondland was absolutely not what Trump’s making it out to be. Not only did the call take place on a differnt day, but the “I want nothing” part, and the part about telling Zelensky to “do the right thing,” took place during a conversation that might not have happened.

Trump's purported “no quid pro quo” blurt was contradicted in the Sept. 7 call — as we now understand it — when the president told Sondland that Zelensky needed to announce the investigations into both the CrowdStrike conspiracy theory and the Bidens (mobster code word: “Burisma”) — both of which are the “quo” part of the quid pro quo.

So, yeah, there was absolutely a quid pro quo. And we know this because Trump described it to Sondland on the same call. Yet Trump’s horseshit line to his goldfish-like supporters conveniently doesn’t take any other testimony into consideration. He’s correctly assuming that his supporters don’t know about nor are capable of remembering all the other details that establish Trump’s guilt.

Making matters worse for Trump, we also discovered that Trump found out about the original whistleblower complaint sometime in late August. This ought to shed increased suspicion upon the veracity of Trump’s “no quid pro quo / I want nothing!” lines.

It’s not as if we actually needed more evidence that Trump’s an unprecedented liar. But knowing what he knew when he spoke those words to Sondland, it’s fair to assume Trump was giving Sondland marching orders for the cover-up. In that respect, it really doesn’t matter whether the Sondland call took place on Sept. 9 o two days earlier. Trump knew about the charges before both of those dates, and his usual process of bumper-sticker cover-up excuses was already underway.

So, to review: Trump knew of the whistleblower’s existence in August, and we can assume he likely began to devise ways to wiggle out of the charges. On Sept. 7, he spoke to Sondland and told the ambassador there was “no quid pro quo,” which in all likelihood was an ass-covering remark intended to counterbalance Trump’s actual description of his extortion of Ukraine on the same call, a description confirmed by both Sondland and Morrison during testimony and not disputed by the Republicans on the Intelligence Committee. And finally, the purported later call with the “I want nothing!” lines — the lines Trump yelled to reporters during “chopper talk” — could well be totally invented, according to reports.

One last thing. If Trump took Sondland’s call on one of his cell phones, there’s likely no record of the call in the White House logs. (We can safely assume the FSB, the Russian equivalent to our NSA, has both a record of the call, as well as audio.) Regardless, Trump will never provide evidence of the “I want nothing!” call he so loudly insisted took place, and he will never testify to exonerate himself, for the simple reason that there’s no evidence that will ever exonerate him. If there were, Trump would have revealed it.

But these are all details the Red Hats will never learn about. They’ll never put this evidence together with the other witness testimonies repeatedly confirming a “quid pro quo.” They flagrantly refuse to acknowledge the “I want you to do us a favor though” request at the top of page three of the non-transcript transcript — which they’re currently insisting we read for some reason. They’ll never connect these dots with the fact that Trump confessed to the crime on television. Rudy Giuliani, Sen. Ron Johnson and Mick Mulvaney all confessed, too. They’ll never stop to wonder why Trump isn’t submitting his own exculpatory evidence and instead has submitted nothing to the impeachment inquiry, likely because he only possesses damning evidence. None of these rather large puzzle pieces will ever interlock in their brains to form the incontrovertible narrative of Trump’s guilt. Most importantly, they’ll never understand that Trump is cynically exploiting their naiveté and short memories while they endlessly swim in circles in his fishbowl.