"Fox & Friends" co-host: Kamala Harris blaming "everybody but herself" for campaign meltdown 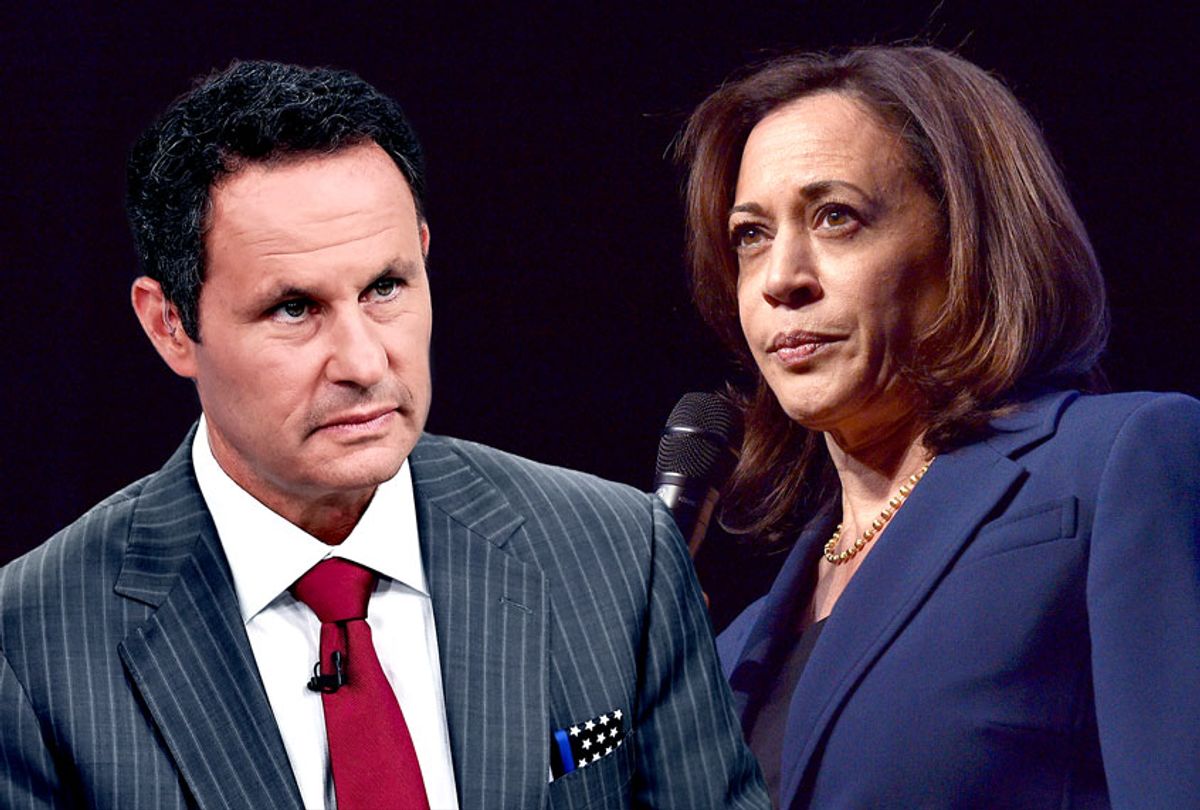 “Fox & Friends” co-host Brian Kilmeade criticized Sen. Kamala Harris of California for blaming “everybody but herself” for the conditions that caused her to end her Democratic presidential campaign on Tuesday.

“Unbelievable. I've never seen somebody drop out of a race and blame everybody but herself,” Kilmeade said. After briefly stumbling over his words, he mentioned that Harris cited not having enough money as a reason for her withdrawal. “Really? You had a great rollout, and then you fell off a cliff. That was all on you. You had no policies. You had no positions. You change with the wind. It’s all about her.”

In an emailed statement from the Harris campaign announcing her withdrawal from the race, the candidate said that it had “become harder and harder to raise the money we need to compete.” That followed a harsh report in The New York Times citing “more than 50 current and former campaign staff members and allies” who discussed organizational problems and infighting of Harris' campaign.

Earlier this week, a resignation letter by Kelly Mehlenbacher, a former Harris campaign worker, alleged that campaign staff had been treated poorly. Mehlenbacher wrote that many staffers had been asked to move from Washington to Baltimore only to be laid off without notice “and without thoughtful consideration of the personal consequences to them or the consequences that their absence would have on the remaining staff.”

Another article from the Times aired accusations that Maya Harris, Kamala Harris' sister and campaign chair, and campaign manager Juan Rodriguez had done a poor job of maintaining staff morale or agreeing on messaging and policy positions that provided a clear rationale for Harris' candidacy.

Mehlenbacher was later hired by the presidential campaign of former New York Mayor Michael Bloomberg. Kilmeade noted that Bloomberg appeared to be gaining support as Harris was leaving the race, but did not mention that Bloomberg's nearly limitless resources have allowed him to flood early-voting states with campaign advertising.

It has been a rapid fall from political grace for Harris, who as recently as July seemed poised to become one of the leading Democratic contenders. After a strong performance in the June presidential debate, during which she challenged former Vice President Joe Biden on his commitment to racial justice, Harris more than doubled her level of support. But by mid-July she began to decline, a process that was accelerated by her interaction with another Democratic candidate, Rep. Tulsi Gabbard of Hawaii, during that month's debate.

Gabbard criticized Harris’ record as a California prosecutor, saying that she had "put over 1,500 people in jail for marijuana violations and then laughed about it when she was asked if she ever smoked marijuana. She blocked evidence that would have freed an innocent man from death row until the courts forced her to do so. She kept people in prison beyond their sentences to use them as cheap labor for the state of California." Harris did not directly respond to Gabbard’s claims, and fairly or otherwise, that moment will now be perceived as the beginning of the end of a once-promising presidential campaign.