Press Watch: Yes, America is divided. But how, and why? And who benefits? 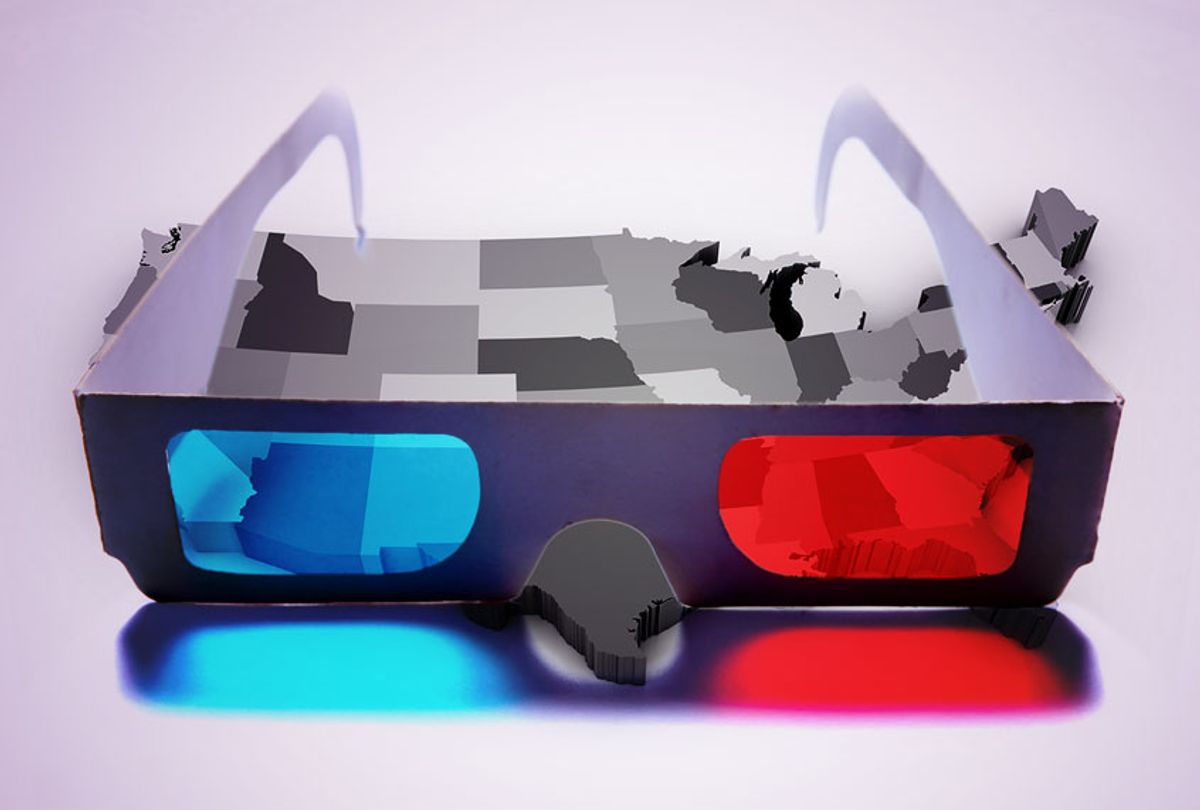 That the nation under Donald Trump is politically polarized — with Republicans on one side and Democrats on the other — has become a cliché of American political journalism.

As it happens, the plurality of Americans actually identify as independents (38 percent, according to Gallup), rather than Democrats (31 percent) or Republicans (30 percent). So the cliché is not technically accurate.

But the bigger problem is that there are more interesting, significant and enlightening ways to examine the rifts in our political culture. (Read my primer on how the old labels don’t properly capture today’s political divisions.)

Arguably, the most elemental political divide these days is between people who still believe in facts, and people who don’t.

Elite media figures acknowledge that the two sides don’t share basic facts anymore. But they’re too timid to say which side’s “facts” are facts and which side’s are fantasy. They certainly can’t bring themselves to say how we got there — or more specifically, how the Republican Party drove us there over the last decade or more, culminating in Trumpism.

So you have NBC’s Chuck Todd lamenting over the fact that “Democrats are trying to have a conversation about what the president did. And Republicans are having a completely different conversation. As — we couldn't even agree on the same set of facts.”

Sometimes these elite reporters even lend their own voice to arguments they know are spurious, as former Obama speechwriter and podcast host Jon Favreau tweeted:

There’s another, maybe even more important political divide explored in a marvelous and thought-provoking manifesto from Monika Bauerlein, the CEO of Mother Jones.

New York Times executive editor Dean Baquet made a snotty comment about Mother Jones the other day as he argued that being “the leaders of the resistance to Donald Trump” would be “an untenable, nonjournalistic, immoral position for the New York Times.”

Bauerlein, for her part, slammed the Times for being so invested in “being seen as neutral arbiters of political discourse” that they overreact to “being characterized otherwise” and “end up missing important stories — or overdoing it on not-so-important ones as a result.”

But this, to me, is the biggest takeaway:

The fundamental mistake that conventional Washington journalism has made over the past four years is to imagine all of politics as two-dimensional — Democrat to Republican, left to right, with far too little attention to the many other fault lines that run through, across, and at a diagonal to that distinction. One of the most important of these other fault lines is the one between those who stand for democracy, with a small d, and those who abet authoritarianism and minority rule.

The Times can’t and shouldn’t be part of a capital-R, partisan Resistance, but it better damn well be part of the lowercase-r resistance against authoritarianism and illiberalism. And if leaders like Baquet are worried about taking sides against the latter, they are failing (not to get grandiose, but dammit, it’s Defcon One here) their sacred mission.

And even if journalists aren’t willing to take sides in this divide, they sure could address it more directly in their work.

There’s one divide the elite media accentuates: the one between old white folks sitting in diners, whose political views are apparently endlessly fascinating to journalists at major news outlets, and pretty much everyone else, whose views never seem to get covered at all.

The Associated Press brought us one of those stories the other day, ostensibly making the case that public impeachment hearings “aren’t moving the needle.”

The government editor for NPR’s Pittsburgh affiliate weighed in:

Here’s another axis to consider. I saw the New York Times’ deep dive into the divides within the abortion-rights community as exposing a broader one between liberal elites in Washington who were celebrating a golden age under Obama and folks outside the Beltway, who saw how a lot of things were actually going to shit.

In record time, the notion that views of impeachment are split and hardened has become gospel among top political journalists.

“[W]hich message is sticking across the country?” the New York Times asked recently. Then it answered:

Even more than with most issues, opinions on impeachment divide along partisan lines. While public opinion has fluctuated some since House leaders announced the impeachment inquiry two months ago, overwhelming majorities of Democratic and Republican voters continue to line up behind their respective parties. As a result, support for or opposition to impeachment rarely climbs much higher than 50 percent in any poll. (The impeachment inquiry itself is slightly more popular: By a margin of 5 to 10 percentage points, Americans tend to tell pollsters that starting the inquiry was a good idea.)

But as media analyst Eric Boehlert wrote for Daily Kos, “by treating as no big deal the fact that basically half the country supports removing the president of the United States from office, the media is greatly helping Republicans spread their preferred impeachment message: The inquiry isn't resonating.”

Similarly, NPR recently concluded that “the overwhelming majority of Americans across parties say nothing they hear in the inquiry will change their minds on impeachment.” But that still left 30 percent who said it could — including 42 percent of independent men.

I have to admit that my attempt to get folks to confront their know-nothing relatives over Thanksgiving and report back on any success was a total bust.

Nevertheless, I was hearted to hear Columbia University psychologist Peter Coleman on CNN saying that views of impeachment might change over Thanksgiving.

“One of the things we find is that people actually — their attitudes are more affected by their relationships by their friends and family that they speak to who they trust and understand,” he said.

Lots of people watched the House Intelligence Committee's impeachment hearings, and they’re “having conversations with countless others,” he said. “And it's through that channel that you start to see an impact. Which means that sometimes these effects take time to see — to see them show up in polls. So I do think that there could be changes taking place, we just don't see them in the immediate polling.”