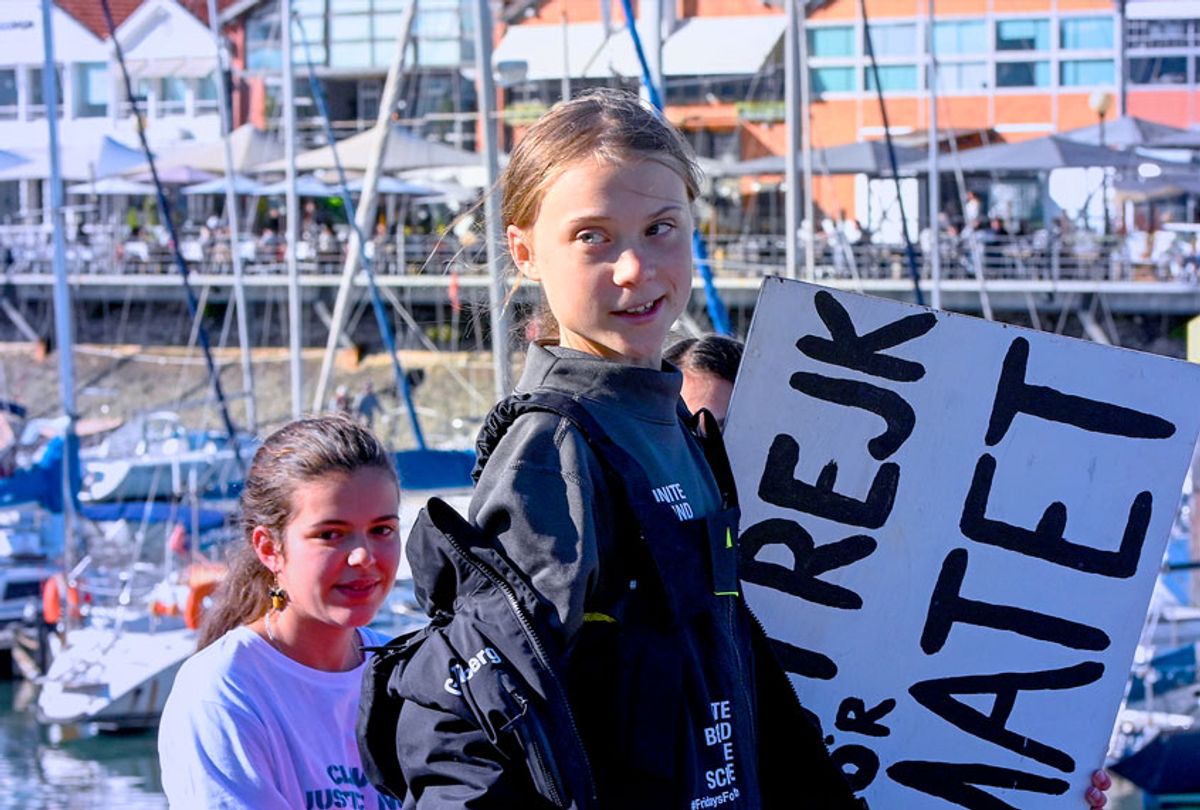 Swedish teen climate activist Greta Thunberg carries the placard "School strike for the climate" which she held outside the Swedish parliament, upon her arrival in Santo Amaro Recreation dock on December 03, 2019 in Lisbon, Portugal. Greta Thunberg sailed from Norfolk, Virginia, USA , accompanied by her father Svante Thunberg on the French built Outremer 45 catamaran La Vagabonde, skippered by Australian Riley Whitelum, and is on her way to attend COP25 in Madrid, Spain. (Horacio Villalobos/Getty Images)
--

Greta Thunberg, the 16-year-old climate change activist who has emerged as the face of the youth protest against man-made global warming, arrived in Lisbon in a catamaran Thursday after a three week trip across the Atlantic Ocean.

Thunberg arrived at the Portuguese capital, where she will next head to the U.N. Climate Change Conference taking place in Madrid, according to the Associated Press. She traveled by catamaran instead of by plane in order to “send a message it is possible” to live a sustainable lifestyle. Her trans-Atlantic voyage began in the United States.

During a press conference at a Lisbon quayside, Thunberg said she plans to urge political leaders at the conference to prioritize climate change. She hopes they will “finally understand the urgency” of the issue and cooperate internationally to effectively address it.

“People are underestimating the force of angry kids,” Thunberg said.

Thunberg’s trip to Lisbon occurred unexpectedly, as the climate change talks had initially been planned for Chile, according to the BBC. When political unrest in Chile caused the climate talks to be moved to Spain, Australian YouTubers Riley Whitlum and Elayna Carausu and British sailor Nikki Henderson joined her as she took a yacht that leaves little to no carbon footprint (and is owned by Whitlum and Carausu) back to Europe. The trip took nearly three weeks, and the crew sometimes had to grapple with tempestuous weather, including a lightning storm and 5-foot waves. Henderson, Thunberg, Whitlum and Carausu were joined by Greta’s father Svante. Lennon, the child of Whitlum and Carausu, also made the voyage.

Henderson was criticized for taking a plane from the U.K. to Thunberg’s boat. She conceded that “in an ideal world, yes, I would have sailed there and sailed back.”

Thunberg’s climate change advocacy has perhaps been best summarized by her speech to the U.N. in September during the Climate Action Summit in New York.

"You are failing us, but young people are starting to understand your betrayal," Thunberg told delegates. "The eyes of all future generations are upon you, and if you choose to fail us, I say we will never forgive you."

She later added, "You all come to us young people for hope. How dare you! You have stolen my dreams and my childhood with your empty words, and yet I'm one of the lucky ones. People are suffering. People are dying. Entire ecosystems are collapsing."

The Swedish teenager has also been attacked by many on the right for her advocacy on climate change. During a trans-Atlantic voyage to the U.S. earlier this year, a Brexiteer said he hoped she would have a yachting accident. A right-wing British MP once referred to her as the “Justin Bieber of ecology,” and Australian blogger Andrew Bolt said she was “deeply disturbed.”

More recently, Top Gear host Jeremy Clarkson claimed that Thunberg was “mad and dangerous, and she is causing the young children sleepless nights with her idiocy. I think she needs to go back to school and shut up.”