Tucker Carlson and his guest said the civil rights struggle does not affect "any normal person" in the U.S. 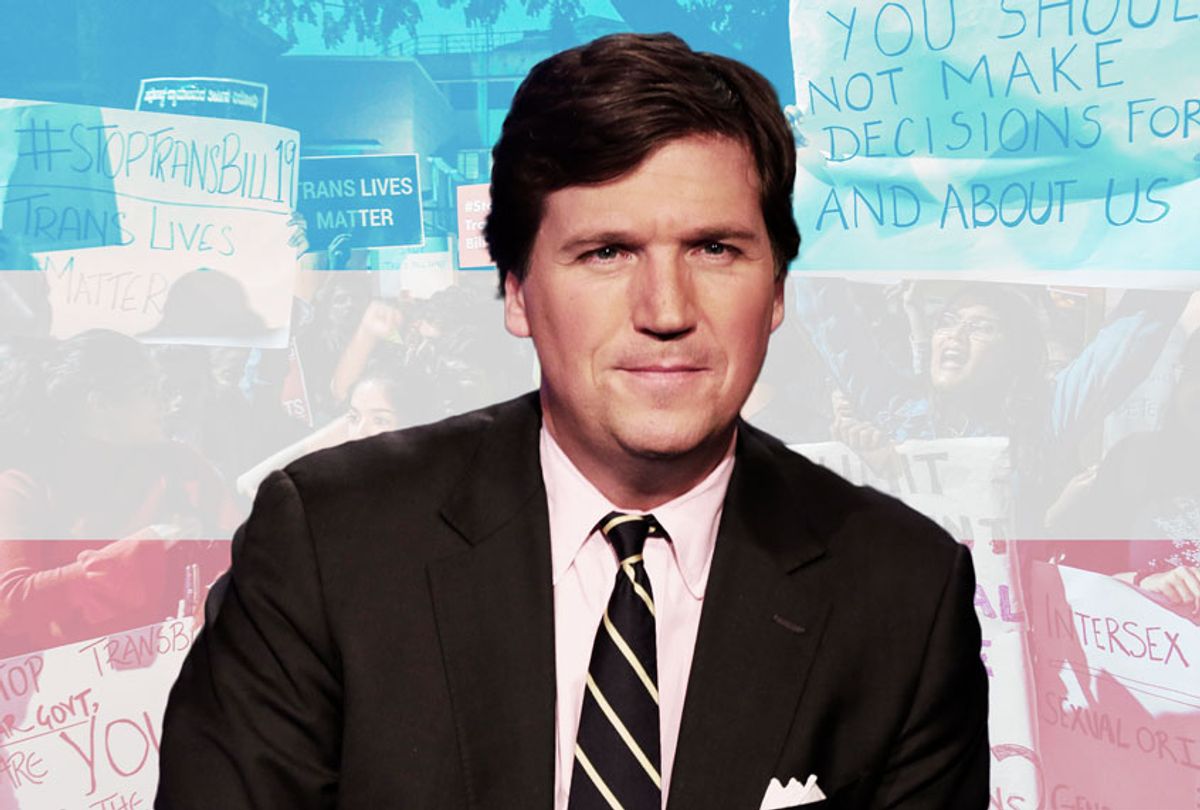 Tucker Carlson hosted a segment on his Fox News primetime show in which he criticized the civil rights struggle for transgender rights as an issue that does not affect “any normal person” in America.

After mentioning that Democrats have drawn attention to transgender issues during the 2020 election cycle, Carlson said that “conversations like this ’gotta seem a little bit strange to you if you’re, I don’t know, a struggling blue collar worker — there are millions of them in this country – or a parent with an opioid-addicted son — millions of those. Or really any normal person.”

Carlson then introduced Meghan Murphy, a Spectator USA contributor, who dismissed the transgender community as a “tiny minority of the population.”

“It  is really odd, because you wouldn't even need to speak to voters to assume that there are probably more important issues on the table than how somebody feels about their so-called gender,” she said. “I mean, we're talking about a tiny, tiny, tiny minority of the population who identifies as transgender.”

She added, “And I think that people are probably worried about, you know, things like keeping their jobs, having housing, having health care, etc., etc. It's a really strange thing to focus on.”

Carlson then made the factually inaccurate claim that transgender rights are a “boutique issue” that was more of a concern “for rich people” than ordinary Americans.

“I consider it a totally academic issue,” Murphy concurred. After claiming that “this whole concept of transgenderism and gender identity was really invented within academia,” she said that “nobody in the general population” really believes that “it's possible to change your sex through self-declaration, that your sex and that, you know, material reality really is dependent on your own personal view and your own personal experience.”

There is considerable scientific evidence that transgender identity is rooted in verifiable biological facts, as discussed in publications like Scientific American and Harvard University’s Graduate School of Arts and Sciences. Advancements in knowledge about genetics, neurobiology and endocrinology have affirmed that transgender identities are real.

Polls also show a growing acceptance of transgender identities within the American public. A study by the Public Policy Research Institute in June found that 62 percent of Americans are more supportive of transgender rights than they were five years ago, while only 25 percent were more opposed.

Similarly, a YouGov survey in October found that 39 percent of Americans know someone who is transgender, and 59 percent believe employers should not be allowed to fire a transgender individual whose work clothes match their gender identity. Republicans were generally outliers, though, with YouGov writing that the group was “very different from the rest of the public when it comes to how they look at transgender people. Republicans mostly believe someone should be thought of as the gender they were assigned at birth, while other adults are more likely to acknowledge the transition.”

Carlson was also incorrect when he claimed transgender rights was a "boutique" issue. At least four dozen transgender or gender non-conforming people died in the U.S. due to fatal violence in 2018 and 2019, with the majority being African American transgender women, according to the Human Rights Campaign.

During an interview with Salon in January, Tucker Carlson described himself as someone who opposes “identity politics” and wishes to focus on “things that we could potentially change.”

“I just wanted to reorient the conversation away from what I think or from the identity politics stuff, especially because it's irresolvable,” Carlson said at the time. “I would never make the case that racism doesn't exist, or it's not a factor. Of course it does and it is. But in the end, our racial differences or sex differences are immutable differences that can't be fixed. They can't be changed. They're set at birth, so it's not only counterproductive, but in my opinion, it is an intentional diversion away from conversations about things that we could potentially change, like tax rates.”