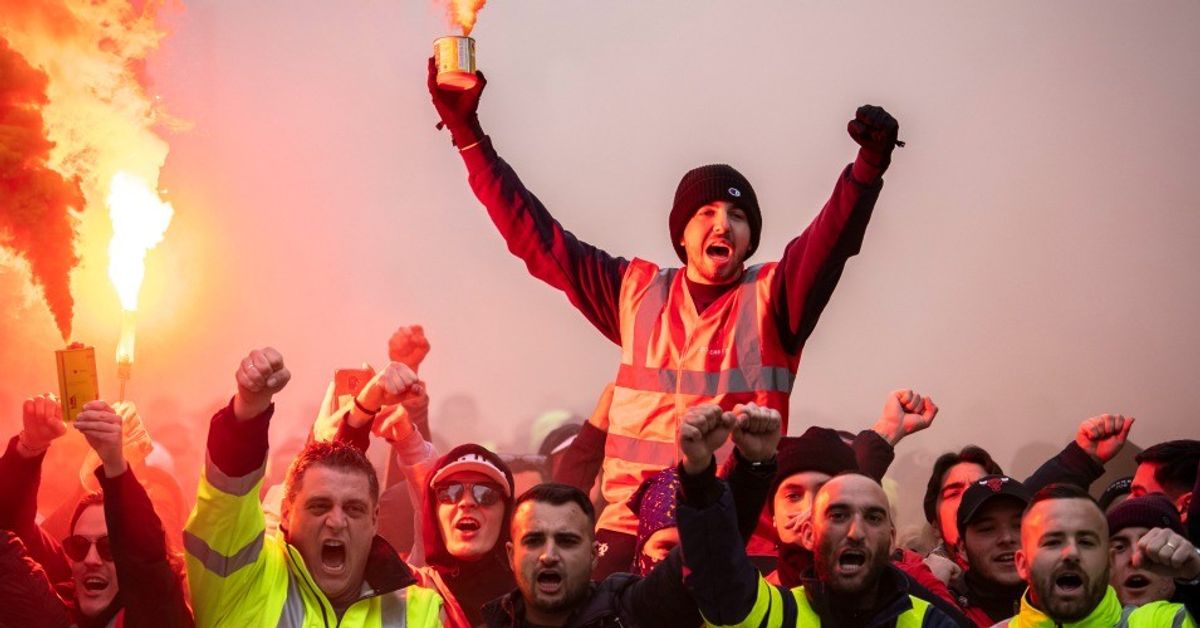 A protester holds a flare as public and private workers demonstrate and shout slogans during a mass strike against pension reforms on Dec. 5, 2019 in Marseille, France. (Arnold Jerocki/Getty Images)
--

In the nation's largest public-sector strike in decades, hundreds of thousands of workers — from teachers to air traffic controllers to rail workers — took to the streets across France and effectively brought large swaths of the country to a standstill Thursday, to protest President Emmanuel Macron's plan to overhaul the pension system.

French unions leading the demonstrations have threatened to strike until the Macron government drops the proposed pension reforms, which workers and critics warn would slash benefits for millions of people.

"We have one of the best pension systems in the world, if not the best," said the General Confederation of Labour, France's second-largest union by membership. "Yet the president has decided, purely out of ideology, to wipe it out."

Macron has signaled that he has no plans to back away from his pension proposal, meaning the strike could continue for days or even weeks.

The Guardian reported that "rail services almost ground to a halt" due to Thursday's strike, "with 82 percent of drivers on strike and at least 90 percent of regional trains canceled."

Twenty percent of France's domestic flights were also canceled, and the Eiffel Tower—one of the nation's largest tourist attractions — was shut down.

Police used tear gas against demonstrators in Lyon, forcing them to retreat:

As Paris-based journalist Cole Stangler wrote in The Guardian Wednesday, Macron's proposed reforms "would mark the deepest overhaul of France's pension system since its creation in the aftermath of the Second World War."

"Protesters in France will probably be derided as unrealistic, as stubborn defenders of an old-fashioned model in need of change," wrote Stangler. "What's actually far more outdated in 2019 is Macron's insistence on chipping away at an effective and popular social welfare program."

"On paper, the U.K. and U.S. might be more economically competitive than France, but at what cost? Can anyone truly say that neoliberal reforms have made them better countries to live in?" Stangler asked. "The country's welfare state is a world-class achievement that ought to be protected, not hollowed out for savings."