InfoWars host who called for Obama to be lynched interrupts impeachment hearing: “Trump is innocent” 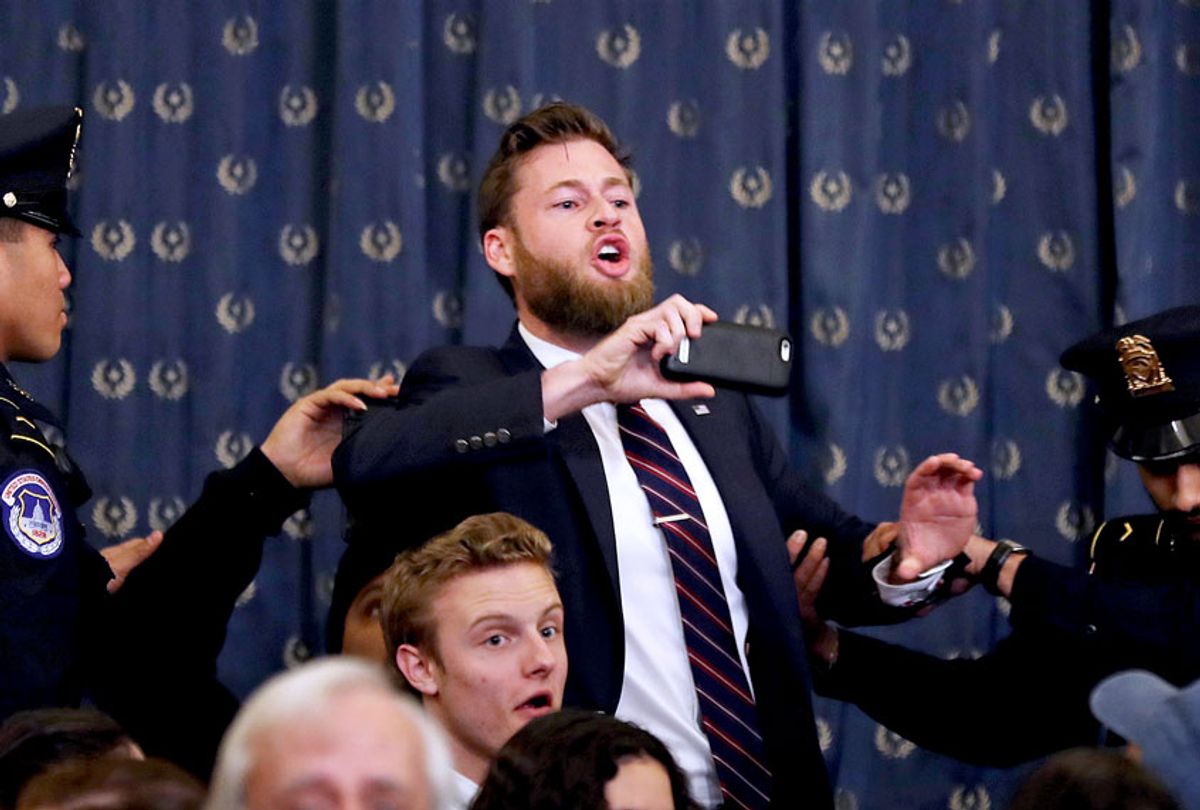 Infowars host Owen Shroyer shouts, 'Jerry Nadler and the Democrat party are committing treason against this country, and you can kick me out, but he's the one committing crimes" as he is removed by police after interrupting a House Judiciary Committee hearing on impeachment in the Longworth House Office Building on Capitol Hill December 9, 2019 in Washington, DC. The Judiciary Committee formally received evidence in the impeachment inquiry of President Donald Trump, whom Democrats say held back military aid for Ukraine while demanding they investigate his political rivals. The White House declared it would not participate in the hearing. (Chip Somodevilla/Getty Images)
--

A far-right host from the conspiracy theory repository InfoWars interrupted Monday’s impeachment hearing to heckle Judiciary Committee Chairman Jerry Nadler before he was hauled out of the room.

“Jerry Nadler and the Democrat Party are committing treason against this country,” Shroyer claimed. “We voted for Donald Trump. And they’re simply removing him, because they don’t like him."

“You’re the one committing treason,” Shroyer shouted at Nadler. “Trump is innocent.”

“Obviously, I shouldn’t have to remind everyone that the audience is here to observe and not to demonstrate,” Nadler said after Shroyer was removed by security.

“The president welcomed foreign interference in our elections in 2016. He demanded it for 2020. Then he got caught,” Nadler said in his opening statement.

Shroyer recorded the incident on his phone, continuing to tape after being escorted out of the hearing.

"If you want a comment, I think it's ironic I'm the one being hauled out of here when the Democrats are the ones committing the crimes," he told police officers, claiming that the interruption was his “patriotic duty.”

A spokeswoman for the Capitol Police told The New York Times that one person had been charged with disruption of Congress, though she did not confirm if it was Shroyer.

Shroyer is the host of “The War Room” on Alex Jones’ InfoWars outlet, which has been largely banned by digital content distributors. The outlet is also the subject of multiple lawsuits brought by parents of the victims of Sandy Hook, which Jones has called a “false flag.” Shroyer has also alleged that the shooting was staged.

Shroyer also helped spread the “Pizzagate” conspiracy theory, which falsely accused prominent Democrats and supporters of running a child sex-trafficking ring out of the basement of a Washington pizzeria, which does not even have a basement.

The InfoWars host came under fire in 2016 for calling for former President Barack Obama to be lynched, claiming that he had committed treason and belonged "in jail.”

“He belongs in Guantanamo Bay. I mean look, I’m not saying this should happen,” Shroyer said at the time. "But Barack Obama — you know, find the tallest tree and a rope."

Former first lady Michelle Obama on Monday called the impeachment proceeding “surreal” in an interview on the "Today" show.

"I don't think people know what to make of it. But do I think we can come back from it? Oh, yeah,” she said. "We've seen tough times in this country. You know we've gone through depressions, and wars, and bombings and terrorist attacks. And we've gone through Jim Crow, and we've always come out stronger."

"And that's what we have to continue to believe, because what's our choice?" she asked. "To ball up in a corner and call it a day? Well, that's not fair to this next generation that's coming before us that are counting on us to get this right."

"It's not an 'us or them.' It's not an 'R or a D' (Republican or Democrat). We are all here as part of this country,'' she added. "We all want the same things. It's just — sometimes that gets lost in the noise."

You can watch video of the incident below via Twitter: