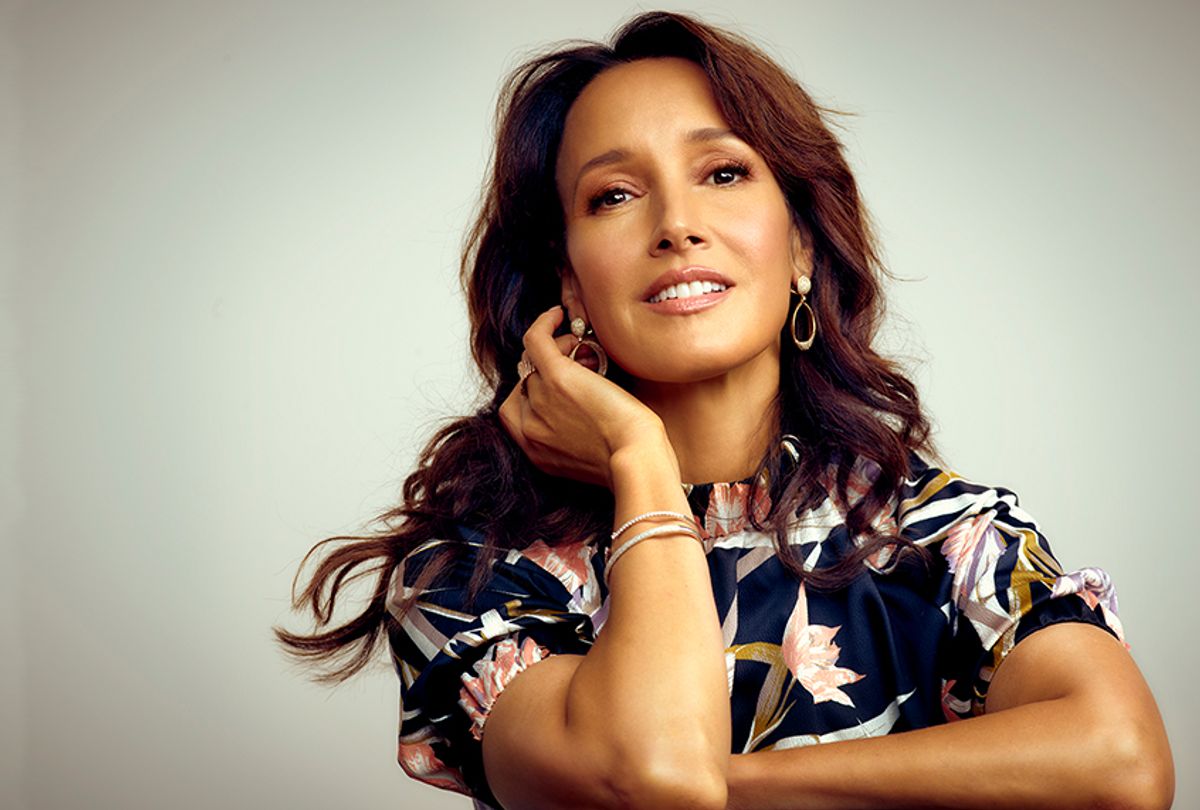 When it debuted in 2004, there was nothing else on television quite like "The L Word," the pioneering Showtime series about a tightly knit group of lesbian and bisexual women living and loving in Los Angeles. Now, a decade after the show's finale, the new Showtime series "The L Word: Generation Q" reunites Shane [Katherine Moennig], Alice [Leisha Hailey], and Bette as they grapple with parenting, politics and of course, sex and love.

"Going back to the show is like revisiting with old friends," says Jennifer Beals, who plays the ambitious Bette Porter and serves as an executive producer for the new series. The actor, who has been a household name and a fashion icon since her breakthrough performance in 1983's "Flashdance," joined us in our studio recently for a "Salon Talks" conversation about what makes "The L Word" so timeless — and so topical. Watch the conversation on Salon TV, or read interview below.

The first thing I need to ask that has been the number one question is: So who did kill Jenny? Did you do it? Was it you?
You'll have to tune in to find out. I'm not going to give it away, it's a spoiler.

I will say, it is addressed. You didn't leave us hanging for 10 years to not mention it.
It is addressed, yes. It gets answered, and lots of questions get answered, actually.

I've seen the first three episodes, and there is a good sense of the continuation of even the characters who are not present.
There are a lot of little Easter eggs throughout the show.

Like the way you'd do a shot.
Which I didn't even realize that I was calling back. It was just in my DNA apparently. In fact, somebody came over to me and said, "Oh no, don't do that with the shot." [I said,] "Well, I really feel like it's appropriate." Then Kate [Moennig] chimed in and said, "Oh, Bette's done it before. She doesn't really drink shots."

Let's talk about where Bette is now. She's in a very different place in her life. It's a really exciting moment for her.
And a challenging time too, in some ways. She's running for mayor of Los Angeles. She's parenting a 16-year-old daughter, and she's had a very challenging last two and a half years. She doesn't really know how to handle it, and so she works. She's a problem solver, but not apparently in her personal life.

But things have happened. She's also seen a lot of wrongs in society that have affected her personally, that have caused her to want to run for mayor. I can't give too much away.

It's been 15 years since the show first premiered. It was so revolutionary in its time. I want to know where you were in your life when this story came along. When this character came into your life, what was it that drew you to this project initially?
When I was first given the script, it was called "Earthlings." I was asked to choose between Bette or Tina, and Bette resonated with me more. I sat down with Ilene [Chaiken, the show's co-creator] and I just was really excited to dive into a character who seemed to be two things at the same time. She seemed to be very strong and yet very vulnerable, and loving to her partner, and yet somebody who took up quite a bit of space.

There is a part in this season where you talk about all of those contradictions in yourself, saying, "I'm not perfect." These characters, once again as before, are wrestling with a lot of ethical questions in their own lives. There isn't necessarily a right or wrong. It's lots of shades of gray, which must be very exciting, as an actor.
It's much more interesting to play. Going back to the show is like revisiting with old friends, like somebody that you haven't seen in 10 years. There's something that's intrinsic to them that you recognize, and you love. You can see their core values perhaps haven't changed, but you also maybe see their core flaws may not have changed. But there's something sometimes ineffable that is changed. It's interesting, as an actor, to explore that, and to try to figure out all of those things, like what stayed the same and what's changed.

I went back and watched some of the initial interviews that you did at the time when the show first came out in 2004. It really makes clear how different the show was then, because you were getting asked, "You're straight, but you're kissing girls. What is that like?" Behind the scenes, were you feeling any trepidation about coming into a project like this? Were there any people in your life saying, "This might not be a great idea for your career?"
Gosh, no. Not at all. No one. I would never surround myself by a team that would say something like that to me. I think we were all really excited about the possibility of where this character was going to go. It never dawned on me for a second that it would be hazardous to my career or something absurd like that. I was just really felt very honored to play the character.

As a straight woman playing a lesbian, particularly in 2019, I take the responsibility very, very seriously. What's funny is that, in the beginning, I really concentrated, as an actor, on what it was to be a gallerist. What it was to be a curator. I was focusing so much on the art world and what it was, in terms of fundraising that I would have to do and all of these other aspects.

Then I had to do a love scene. I went, "Oh yeah, there's a whole other bit of research. Do I need to do research on that?" Or "What is that about? Is there some secret thing that I don't know about?" It all really comes down to love. A love scene, or a sex scene, has a beginning, middle, and end. The characters want something from one another. Perhaps that thing isn't on the surface, or there are other different layers of what they might want or are trying to express, and [I'm] breaking the scene down as I would break down any scene.

It was that kind of phenomenon where it was a collective experience. When did you know that this was becoming something really big?
I don't even think about it that way. But I guess as you say, when it became clear that it was community-building. That it wasn't just something that people watched as individuals. That they wanted to watch it together, so that they could share it. That was the days before social media, so the most immediate way that somebody could share that experience was being next to each other, or being with each other. That, I thought, was really exciting.

You, over the years, have said that you know personally the impact that it had on different people. I heard that you have a framed letter. Can you tell me what that letter says?
It's basically somebody thanking me for Bette, and for the show, because it was a counter-narrative to the one that their family and their community had been telling them about the gay community, and that meant everything to them. That it saved their life.

That letter meant everything to me, because in the beginning of the show, it dawned on me what these stories could do for someone. I started realizing truly the power of storytelling. Really, when you think about it, we're telling ourselves stories all the time. Who we are. What we want. What we're supposed to want. Who we're supposed to be. Depending on what our parents have told us, what our teachers have told us, what the community has told us.

To have a show that could give visibility, and comfort, and self-worth, and agency to a young woman who perhaps didn't have access to her community, or a community with whom she felt a true affinity, meant everything to me. Ilene was like, "Let's make sure we tell a good story."

You keep it on your phone. You keep it close to you at all times.
Because you remember what it's about. In the truth of the specificity of what you're creating, that somehow you give someone a portrait of someone they recognize and maybe that they recognize themselves in, and that can help them in some way.

Even for the person who doesn't recognize themselves, but recognizes that character perhaps as other, that can help shift the paradigm of a group that they might have been prejudiced against. There's a whole thing called the parasocial contact hypothesis. If you even watch a TV show about a group of people, say that you have some sort of prejudice against, and they're portrayed in some kind of affirmative way or positive way, it can start to shift your experience of that group of people. It can start to shift how you feel in your real life.

Which feels even more relevant right now because it's so easy to silo ourselves in the echo chamber.
The echo chamber is getting worse. The possibility for divisiveness is getting worse, I think. Because like you say, we're all in our silos. It's really important to be exposed to other communities. I don't think television does that enough.

And yet, certainly in the last decade, we have seen a big shift in our entertainment. We have seen a big shift in representation on television of different communities of different people. What was it that made this the moment to bring this show back?
We didn't intend for this to be the moment. Kate, Leisha, and I had intended for 2013 to be the moment, because we had seen that there was so much talk about the show. We were increasingly aware of of this new generation who was demanding to be able to identify themselves in terms of gender and sexual orientation, and how the language was changing. Our use of pronouns was changing, and the whole lexicon couldn't expand fast enough to contain this experience. How fascinating would it be to bring "The L Word" back and include these discussions?

So we went to Ilene Chaikin, and she was excited about the idea, but she was busy with "Empire." And then the 2016 election happened. Ilene and I were texting back and forth as the returns were coming in, and we knew that we had to do something. We realized, "Okay, we're storytellers. Let's bring 'The L Word' back." Let's rededicate ourselves to bringing it back, to not only give visibility, and therefore hopefully agency and a sense of self-worth, in the face of an administration that we knew was going to immediately attack the LGBT community. But also, to give the community at large, the culture at large, an opportunity to see the queer community, to experience the queer community on mainstream television in a way that perhaps was the counter-narrative to what they were going to be told by the administration.
We were really excited to get going, and Showtime, thankfully, only took a couple of days to decide. And then we were off and running.