Press Watch: There's a war on truth — and the media isn't an innocent bystander 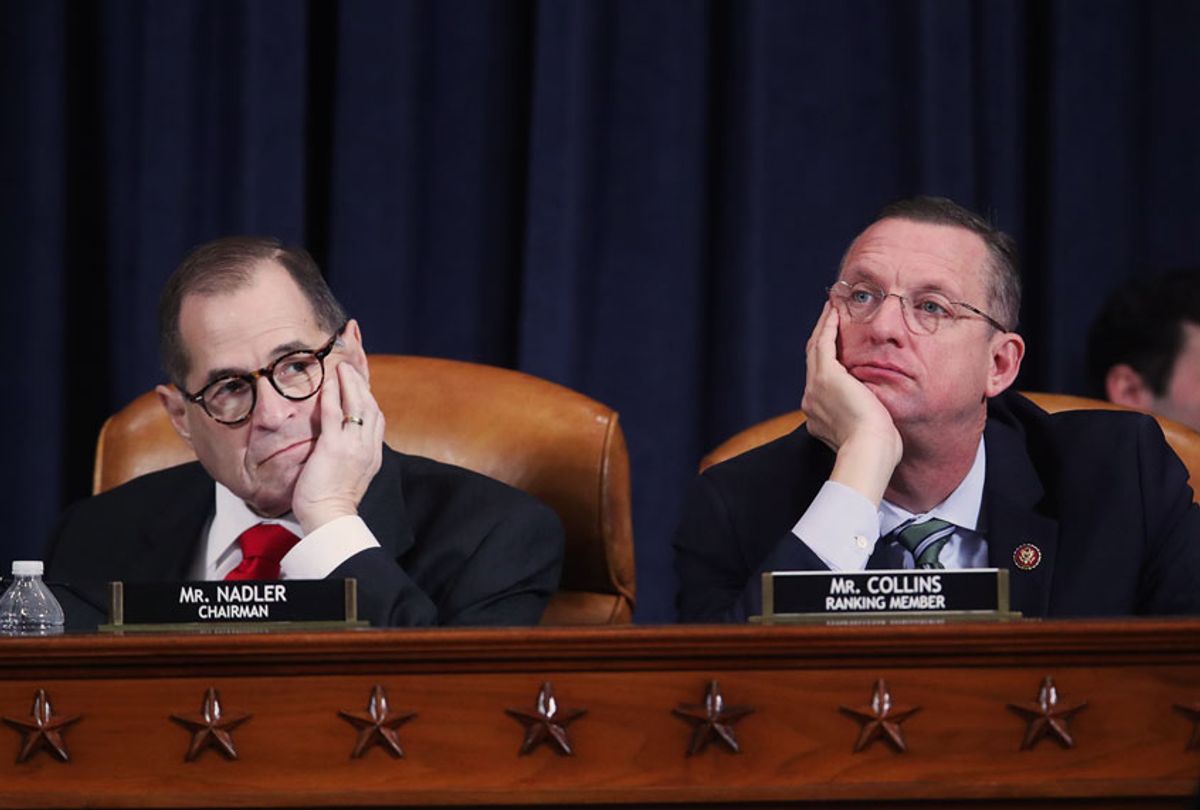 Chair Rep. Jerry Nadler (D-NY) and ranking member Rep. Doug Collins (R-GA) listen during testimony by Democratic and Republican counsels before the House Judiciary Committee in the Longworth House Office Building on Capitol Hill December 9, 2019 in Washington, DC. The hearing is being held for the Judiciary Committee to formally receive evidence in the impeachment inquiry of President Donald Trump, whom Democrats say held back military aid for Ukraine while demanding they investigate his political rivals. The White House declared it would not participate in the hearing. (Jonathan Ernst-Pool/Getty Images)
--

Yes, Peter Baker of the New York Times, truth was on trial on Monday, as you wrote in your lede, but your job was not to throw up your hands and wink. It was to shout the truth from the rooftops, and you failed.

Listening to the latest impeachment hearing before the House Judiciary Committee was legitimately painful, but not because it was a bore. The litany of lies, obfuscations, conspiracy theories, distractions and avoidance from one Republican member after another were enough to drive anyone with a commitment to facts and transparency and fair play completely crazy.

The Democrats were rehearsed and repetitive and nothing to write home about, but at least they remained tethered to reality, and engaged in an enterprise that at its heart does aim to uncover the truth.

Any coverage that didn’t directly address that wild asymmetry was a disservice to the public.

Consider this quote in the fourth paragraph of Baker’s story:

“We’re in a dangerous moment,” said Peter Wehner, a former strategic adviser to President George W. Bush and a vocal critic of Mr. Trump. “The danger is people come to believe that nobody is giving them the facts and reality, and everybody can make up their own script and their own narrative.”

Baker and Times editor Dean Baquet, who Baker essentially channels, are hastening that eventuality as much as anyone in the political universe.

Peter Baker knows that one side is lying and the other is not. You see that in the occasional paragraph, like this one:

Mr. Trump’s insistence that he did nothing wrong has forced at least some Republicans to accept and promote his account even when it contrasts with available evidence. A Republican lawyer presenting the case to the committee on Monday went so far as to say that the evidence did not show that Mr. Trump asked Ukraine’s president to investigate former Vice President Joseph R. Biden Jr. during a now-famous July 25 phone call even though the White House’s own reconstructed transcript quoted him asking his counterpart to “look into it.”

But then Baker backs off and writes: Well, not everyone agrees, that’s the way things are these days, I guess everybody lies now and again, what’s the difference.

Mr. Trump, whose myriad false statements and public lies have been extensively cataloged, hardly caused this phenomenon by himself, but he exemplifies it better than anyone else.

He is the Rorschach test of truth, the guidepost by which people choose their story line. Most Americans tell pollsters that they do not believe what he says, but a significant minority considers him a truth-teller in a broader sense, saying out loud what others will not about a broken system he vows to fix, even if he does not hew to particular facts.

And he’s not the only one:

Mr. Trump is hardly the first dissembler in the White House. Lyndon B. Johnson and Richard M. Nixon were famously talented liars, and Bill Clinton was the first president ever found by a court to have testified falsely under oath. But what Mr. Trump lacks in finesse, he makes up in volume.

(Trump’s lack of “finesse” is a spectacularly jaded euphemism even by Baker standards.)

Really, nobody can be trusted:

Much of the public may not trust Mr. Trump, according to surveys, but it likewise does not trust his opponents all that much either — or the news media that he complains is out to get him.

Continuing his epistemological nihilism, Baker then quotes a purveyor of disinformation as an expert:

“The story of the past half-century is the steady degradation of trust in the institutions and gatekeepers of American life,” said Ben Domenech, the founder of The Federalist, a conservative news site. “Everything from politics to faith to sports has been revealed as corrupted or corruptible. And every mismanaged war, failed hurricane response, botched investigation and doping scandal furthers this view.”

And look at what Baker does here:

The president and his allies have sought to turn the tables on Democrats by accusing them of being the dishonest ones. Mr. Trump’s favorite target is Representative Adam B. Schiff of California, the chairman of the House Intelligence Committee, which conducted the Ukraine inquiry in response to a C.I.A. whistle-blower.

Mr. Trump, who regularly accuses critics of whatever they have accused him of, has taken to calling the congressman “Shifty Schiff” and likewise complains that the parody he gave of Mr. Trump’s July 25 call to make a point was dishonest even though Mr. Schiff made clear it was not a verbatim rendering.

Democrats dismissed the attacks on Mr. Schiff as a false-equivalence effort to distract from the president’s own conduct. But they did not have Mr. Schiff present the evidence on Monday, leaving it to a lawyer instead, avoiding the distraction.

That’s right, Baker engages in false equivalence by dismissing “false equivalence” as a Democratic argument. And then he uses the word “But” to suggest that Schiff’s decision not to appear was somehow evidence of the hollowness of their argument.

The view that Baker and the Times are engaging in false equivalence and failing at their core job is essentially a consensus view at this point among many media observers. Consider:

While it’s certainly true that some portion of our populace doesn’t care about the truth as most of us understand it, I think that percentage is considerably less than you see reflected in Congress, in news reports and on TV. In either case, our job is not to note this problem with a touch of sorrow. It’s to fight back, to shout the truth from the rooftops.