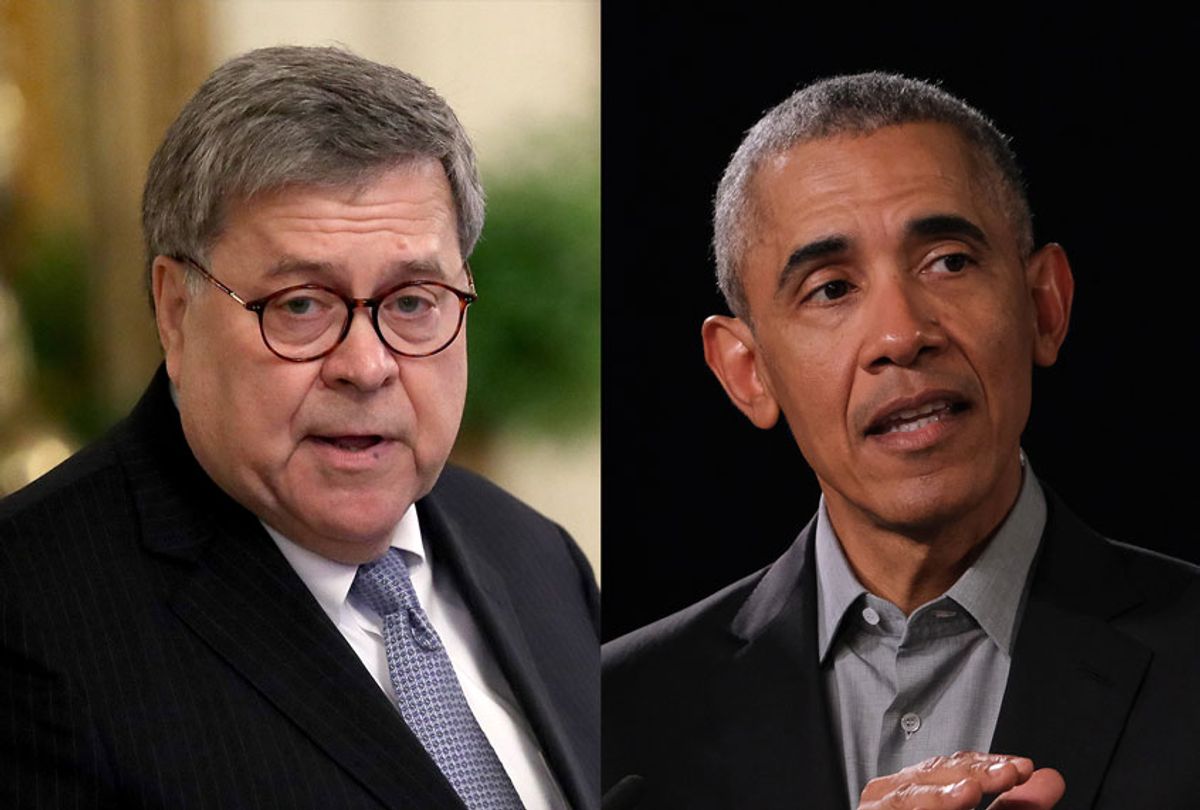 Attorney General William Barr claimed in an NBC News interview that former President Barack Obama posed the “greatest danger” to democracy in the 2016 election — not Russia.

Barr told the network that he disagreed with his own department’s inspector general report, which concluded that the FBI did not “spy” on the Trump campaign and was justified in launching an investigation into its ties to Russia.

Nonetheless, the attorney general claimed that the Obama administration posed the biggest threat to democracy because of alleged spying, which was debunked Monday by the release of the report.

“I think, probably, from a civil liberties standpoint, the greatest danger to our free system is that the incumbent government used the apparatus of the state — principally, the law enforcement agencies and the intelligence agencies — both to spy on political opponents. But as to use them in a way that could affect the outcome of the election,” Barr alleged. “As far as I’m aware, this is the first time in history that this has been done to a presidential campaign.”

Barr claimed to NBC News reporter Pete Williams that the FBI may have opened the investigation in “bad faith” and insisted that Trump’s campaign was “clearly spied upon” in spite of inspector general Michael Horowitz’s nearly two-year investigation which found no such evidence.

He also downplayed the Trump campaign’s extensive contacts with Russian officials, insisting that “presidential campaigns are frequently in contact with foreign persons.”

Barr’s comments were a stark contrast from Horowitz’s report, which found no evidence of the “spying” allegations invoked by the president and his conservative allies.

"I think our nation was turned on its head for three years based on a completely bogus narrative that was largely fanned and hyped by a completely irresponsible press," Barr said Tuesday as he rejected the report’s findings. "I think there were gross abuses . . . and inexplicable behavior that is intolerable in the FBI."

"There was and never has been any evidence of collusion, and yet this campaign and the president’s administration has been dominated by this investigation into what turns out to be completely baseless,” Barr claimed.

Barr issued a statement slamming Horowitz’s report Monday, as did U.S. attorney John Durham, who was handpicked by Barr to investigate the origins of the Russia probe.

The attorney general praised Durham for issuing a rare statement criticizing the inspector general report, arguing it was “necessary to avoid public confusion.”

"It was necessary to avoid public confusion," he said. "It was sort of being reported by the press that the issue of predication was sort of done and over. I think it was important for people to understand that Durham's work was not being preempted and that Durham was doing something different."

Speaking at an event hosted by the Wall Street Journal after the interview, Barr doubled down on his comments, calling the Russia investigation a “travesty.”

“There were many abuses, and that’s by far the most important part of the [inspector general] report," he said. “If you actually spent time looking at what happened, I think you’d be appalled."

Unlike Barr and Durham, FBI Director Christopher Wray issued a statement acknowledging that the investigation found that the Russia probe was opened “for an authorized purpose and with adequate factual predication.”

“The FBI accepts the report’s findings,” he added.

Trump lashed out Tuesday at Wray after he did not not put a positive spin on the report.

“I don’t know what report current Director of the FBI Christopher Wray was reading, but it sure wasn’t the one given to me,” Trump tweeted, after insisting that the report had proven his baseless allegations about the FBI. It did the opposite.

Barr’s latest comments were widely criticized and renewed allegations that he was acting as the president’s personal attorney instead of the top law enforcement official in the country.

“We cannot overstate the damage Bill Barr is doing to the rule of law,” added Rep. David Cicilline, D-R.I., who sits on the House Judiciary Committee.

“Barr’s accusation that the career men and women at the FBI were acting in bad faith a day after a comprehensive investigation failed to find that is a new low,” former Justice Department spokesman Matthew Miller said. “Just sheer partisan hackery.”

“He's an ideological extremist using Trump for his dangerous agenda. I hope more people in the Justice Department speak out against him,” he wrote.

National security attorney Bradley Moss concluded that as he did with his interference in the release of the Mueller report, Barr once again showed that “Trump definitely found his Roy Cohn.”