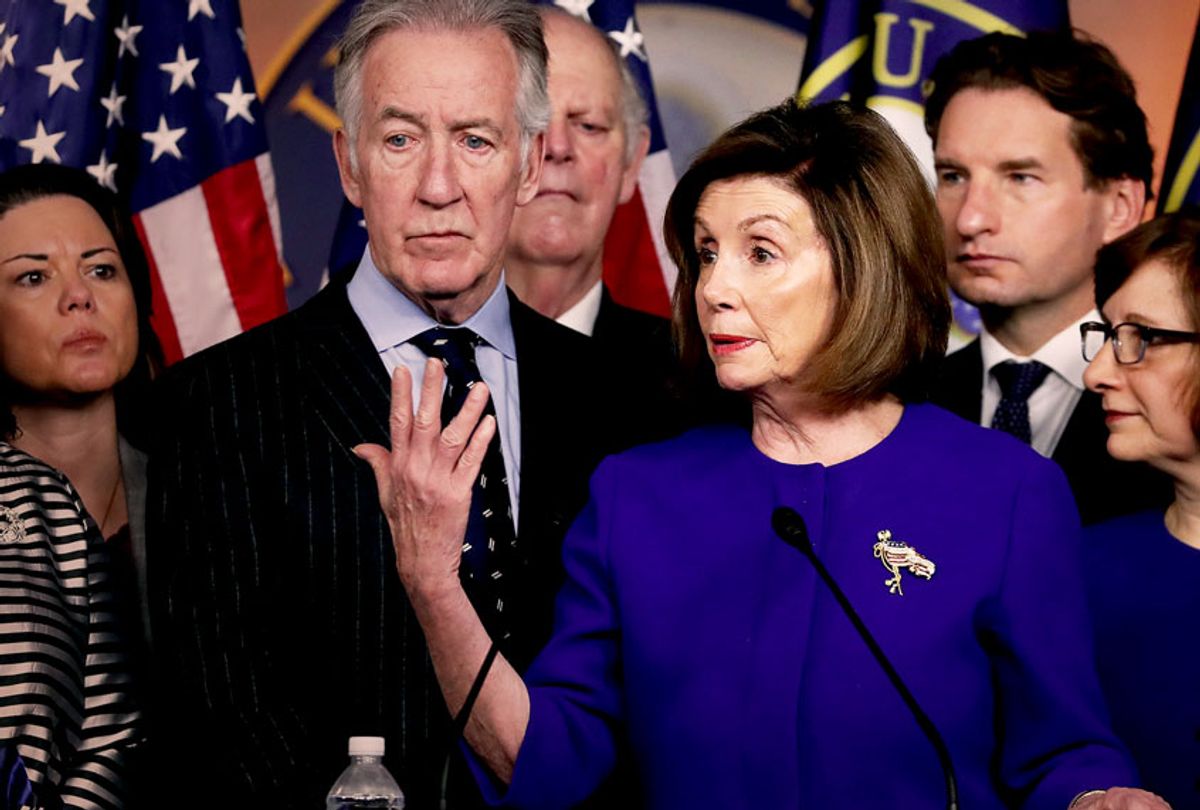 U.S. House Speaker Nancy Pelosi (D-CA) and Ways and Means Committee Chairman Richard E. Neal (D-MA) (L), speak during a news conference on the USMCA trade agreement, on Capitol Hill December 10, 2019 in Washington, DC. Pelosi said an agreement has been reached on a deal over the U.S.-Mexico-Canada, but final details for the trade pact were still being ironed out. (Mark Wilson/Getty Images)
--

Being offline, even for an afternoon, is a trip in today's nonstop political maelstrom. My exposure to the news that Democratic House leadership had struck a deal with Donald Trump on the U.S.-Mexico-Canada Agreement (USMCA), which is meant to replace the Trump-torched NAFTA agreement, was largely positive. Hanging out with similarly politically obsessed friends, we generally agreed that House Speaker Nancy Pelosi had secured a political victory that would be useful in shutting down Trump's accusations that they're the "do-nothing Democrats."

So it was a surprise to fire up my iPad in the pre-dawn hours of Wednesday morning to find that progressives on social media had whipped themselves into a frenzy of anger over the USMCA deal, apparently deciding that it was political suicide that would result in massive losses for the Democrats in the 2020 election. The complaint appeared to be that making this deal was a "mixed message" and that it was "giving" Trump a victory he'd be able to ride into victory in November.

"So the Democrats’ message today is that the president is a criminal with an egregious disregard for the law who they can work constructively with on major policy issues," groused Bloomberg writer Sahil Kapur on Twitter.

Even the Atlantic's Adam Serwer, who tends to be one of the cooler heads on social media, complained, "House Dems were elected on a wave of anti-Trump sentiment and are now diligently working to ensure his reelection and send the message to the electorate that impeachment is just meaningless partisan theater."

Look, I get it. Most of us are still traumatized, and rightly so, from the 2016 election. Two of the most common symptoms of trauma are hyper-vigilance and distrustfulness. Having gotten something we want (Trump's impeachment), it's natural to start panicking and looking for evidence that it's all going to be taken away, as traumatized people do.

Folks, let's all take a few breaths and calm down. The USMCA deal is not a political catastrophe, no matter how gleeful Trump might be over it. On the contrary, it's a reminder that Pelosi understands retail politics and how to shore up her caucus' defenses when dealing with impeachment skeptics in swing districts.

As Matt Ford argued Tuesday at the New Republic, "a defining trait of Trump’s presidency is that Americans have already made up their minds about him." and it's unlikely that something as unsexy as a trade deal is going to move the needle much in any direction. Especially since, as Ford points out, Trump would claim victory no matter what happened, so there's no reason to sweat the bragging and preening he's doing now.

In addition, Ford points out, experts believe "the new agreement would raise the country’s GDP by just 0.35 percent and add only 176,000 jobs," such a minor blip that it's not going to be some great boon to Trump.

(Let's also pause here for a moment and remind ourselves that wishing economic ruin on people in hopes that it will end Trump's presidency is a moral line we should not cross. That's the sort of evil crap we despise in Republicans.)

More to the point, this deal represents the kind of shrewd retail politics that Democrats will need if there's any chance of organizing a coalition to defeat Trump in 2020. As labor historian Erik Loomis pointed out on Twitter, "unions are strongly in favor of this bill," and it's ooky to imply that labor isn't "part of liberals or the left."

This analysis of "winners and losers" from the Washington Post suggests that progressive concerns are actually well-represented by this deal — there are even provisions meant to improve labor conditions for Mexican workers, which is something one would hope progressives care about. These kinds of policy wins might not resonate directly with voters, but they are useful for powerful organizing forces, especially unions like the AFL-CIO, in their efforts to turn out voters in November.

But this isn't just about organizing around these kinds of gains. It's also about the politics of impeachment — and making this deal will probably do much for Democrats in moderate districts who are worried that their voters are prone to believe Republican propaganda about impeachment.

Republicans are throwing a lot of messages around about impeachment, aimed at different audiences. But the one that they hammered the hardest during the hearings was the claim that impeachment isn't about real crimes, but a result of Democrats being "obsessed" with Trump to the exclusion of all other things. Democrats, the argument goes, have given up entirely on the business of representing the interests of the American people in favor of this single-minded obsession with destroying our duly-elected president.

Republicans probably aren't working this talking point to death for their health. Odds are they have good reason (such as focus groups) to believe this might works well on that small sliver of persuadable voters, the ones who feel uneasy about Trump but also want to know what the Democrats are doing for them.

When Democratic representatives go home over the holiday break, they are likely to hear from these voters at constituent meet-and-greets, people who have heard these accusations from Republicans and are inclined to believe them. Being able to turn around and argue that Trump is lying and that, in fact, Democrats passed a trade deal that benefits workers is exactly the sort of thing that will help vulnerable Democrats in these kinds of meetings.

It's easy to forget, in the constant chaos on the national stage, that politics is still mostly a local business. Arming Democrats from moderate districts with a talking point that disarms the most potent Republican argument against impeachment is not some cockamamie notion that Pelosi pulled out of thin air. This almost certainly happened because her members know what kinds of concerns they're hearing from constituents, and need a way to answer them — ideally in a manner that undermines the most potent Republican talking points with the handful of voters who still aren't sure how they feel about impeachment.

It also helps Democrats who are hearing accusations that the impeachment is "partisan theater." Members can calmly point out that they aren't mindless partisans infected with "Trump Derangement Syndrome." On the contrary, they are happy to work with Republicans on trade deals, and only undertook impeachment because of the gravity of Trump's crimes.

Donald Trump has changed many things about politics, but not the fact that members of Congress still need to be able to answer tough questions from voters when they go home, if they want a decent chance of keeping their seats. So it's time for everyone to pour an eggnog, kick up their feet and relax. USMCA isn't going to tank the election. If anything, it may help save it.