Jim Starlin, the creator of Thanos, called President Donald Trump as a "pompous fool" with an "infantile ego" 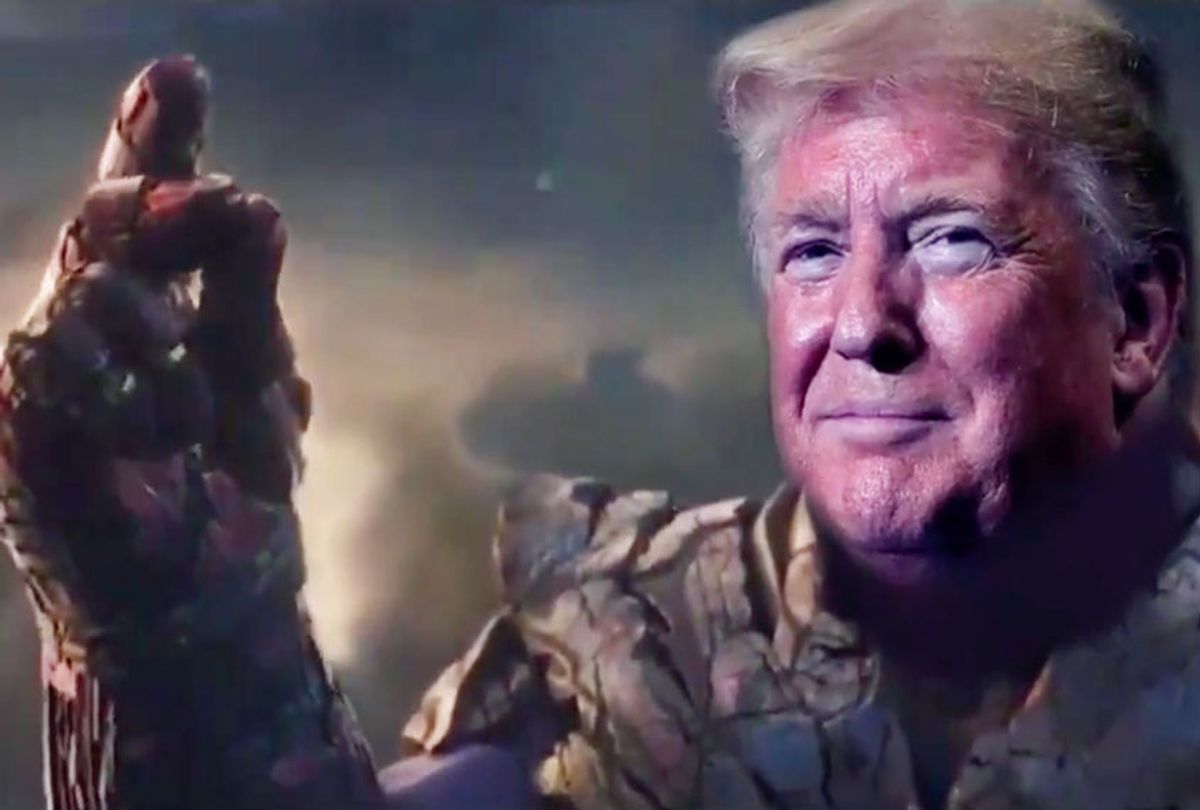 The creator of the Marvel super-villian Thanos referred to President Donald Trump as a “pompous fool” with an “infantile ego” after the Trump campaign tweeted a short video comparing the likely Republican 2020 nominee to the Mad Titan.

"After my initial feeling of being violated, seeing that pompous fool using my creation to stroke his infantile ego, it finally struck me that the leader of my country and the free world actually enjoys comparing himself to a mass murderer," Jim Starlin, a comic book artist and writer who created the iconic character in 1973, said in a statement to The Hollywood Reporter. "How sick is that? These are sad and strange times we are going through. Fortunately, all things, even national nightmares, eventually come to an end."

The video in question shows Trump wearing the Infinity Gauntlet — a glove best known from Avengers: Infinity War and Avengers: Endgame, which bestows the wearer with ultimate power. The scene, taken from Endgame and edited to show Trump’s face superimposed over Thanos’ body, depicts Trump/Thanos saying, “I am inevitable.”

After he snaps his fingers, it cuts to a shot of the House Democrats announcing two articles of impeachment against the president. Their bodies turn to dust and blow away in the wind, similar to the scene in which Thanos murdered half of the living creatures in the universe at the end of Infinity War.

“House Democrats can push their sham impeachment all they want,” the tweet posting the video read. “President Trump's re-election is inevitable."

Molly Jong-Fast, editor-at-large of The Daily Beast, tweeted in response to the ad: “Of course he loses both the electoral college and the popular vote in the movie.”

Trial lawyer Max Kennerly added, “So... we're at the endgame, the final point where Thanos/Trump loses for good?”

Historian Kevin M. Kruse tweeted a meme of Steve Buscemi playing an out-of-touch adult, adding: “You've made Trump a supervillain and depicted him in the scene where his plan to kill everyone in the universe falls apart due to his arrogance and incompetence.”

This is not the first time that Trump supporters have attempted to praise him by comparing him to a comic book villain. Many of Trump’s alt-right supporters have compared him to the villain Bane, such as the neo-Nazi Andrew Anglin. The character has also been used by members of the far-right to attack Black Lives Matter protesters and promote the agenda of alt-right websites like Virginia Dare.

The Trump campaign aroused controversy in April when it used music from The Dark Knight Rises in a campaign video, which included the text: “First they ignore you. Then they laugh at you. Then they call you a racist. Donald J. Trump. Your vote. Proved them all wrong. Trump: The Great Victory. 2020."

That video was eventually pulled from Twitter after Warner Bros. protested the unauthorized use of the movie’s music for the spot.

“The use of Warner Bros.' score from 'The Dark Knight Rises' in the campaign video was unauthorized," a spokesperson from the studio said in a statement to Variety.